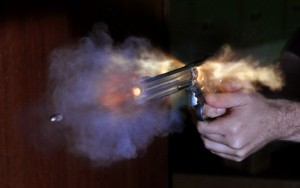 Hi, Very interesting! Can you point to a schematic diagram. Closeup of spark gap??

This is very awesome! I especially like the following "catch sentence" from your blog: "Microflash has more "stopping power" than a hollowpoint." :grin: :grin: :grin:

Should make a video showing off the device in your studio/gun range.

Just a question: what camera did you use? A little more detail on the microphone is also appreciated.

BTW, you can sell these things with marking on the box, "Microflash, more "stopping power" than a hollowpoint"

Amazing photo's ! - could be right from a discovery channel program !

Can you tell more about how you did it?

Have a look here for a possible flash design:

I used a simple piezo mic and 1 meg resistor to trigger an analog port. The delay and sensitivity is set via a potentiometer, shown on an LCD.

I'll be posting a project within the next few days, a high-powered RGBW LED setup. The total output will be a combined 24 watts of LED's, which although not as powerful as Xenon or Arc, will be an appreciable amount of light, if used at close range. I'm initally going to use it as "eyes" one the front of my house for halloween, but the longer term usage is for special effects photography.

I haven't yet used LED as a strobe source for photography, though what I've been able to find suggests the rise and fall time of power LED's are in the range of .04uS to .2uS - as I understand it, more often than not it's the driver that is the lag, not the LED. That being the case, I am really looking forward to trying out the rig to see what I can do in terms of short high intensity strobe LED as a photo strobe..

Have you tried LED's? Not seen many writeups, so not sure if there is a gotcha. These Arc setups are so dang dangerous...

I have been thinking of lEDs too. LEDs can be extremely fast (microseconds are easy). It works of you manage to produce 10 Megawatts of light during 1 microsecond. Otherwise you will not get enough light for a photo. A typical LED has 150 mW of power at 30 mA. So you could use 600 million LED's in parallel to achieve the same. This requires 100 million amps at 5 volts. LED's though produce more light per watt than a spark gap, so maybe 6 million LEDs may be enough or less than 100 million amps.

Overamping a LED for 1 microsecond requires a very high voltage, which will cause spark over or kill a lED.

Well, combined the LED's ought to kick out well over 2000 lumens.. not enough to light a room, but possibly enough to be useful at relatively close distances. Your arc gap (and xenon tubes, which are just arcs too) throw immense amounts of light, and will be superior of course at lighting large scenes.. but my hope is that a smaller area can be lit with sufficient intensity. The LED's are split between two "heads", 3w (3x1w) per color (red,green,blue and white) per head.

I've got a ten-watter I've used as a floodlight, that's a white.. over 1000 lumens.. it's going to be used to simulate lightning as part of the halloween setup.

I've thought about trying it before, but not got around to it.. but since I've got all the stuff in hand now and built a handful of current source modules out of voltage regulators, all I really need to do is slap a transistor on the 10 watter and see what I can coax out of it..

I'm willing to bet that Megwatts in Microseconds may be a bit of overkill for my planned usage.. worst case, I do have my Canon 420EX. I certainly can tell you that using studio heads for stop motion isn't that good an idea.. they are engineered for LONG flash times, comparatively, without quenching...

I've also considered that using a laser diode with some spreading optics might be useful. Laser light, though less powerful overall, can be directed very well with little "wasted" light energy I would think. Sure, you'd be monochrome, but maybe VERY fast..

Light drops off as an inverse square of the distance. If you can't get more light, getting the light closer can work.. I wonder what the guide number would be on a ten watt LED?

A typical flash puts out 300volts from a 150 uF capacitor or .5 x C x V ^2 = 8 Joules.
A ten Watt LED puts out 10 micro Joules in 1 microsecond. So the guide number would be a million times lower than normal flash.
Following rule of squares: if a normal flash can image a subject at 10 meters, a 10 Watt LED could be used at 10 mm distance at 1 microsecond flash time. But a 10 Amp 1 microsecond power source…?

Well, ringlites made from LED's are rapidly becoming the standard for macro photography.. and LED modeling and video continuous-illumination lights are becoming commonplace. Phone flashes are almost exclusively LED these days.. though of course we're not talking about the kinds of sensors you find in a cellphone.

I'm thinking that near-shot target illumination ought to be possible, especially if a light background is used.. I guess we'll see... throw all the light sensitivity at it I can, max ISO, a lens you can drive a bus through ( 50mm f/1.8 ) and maybe close-target freeze motion might be possible.. nothing to lose in trying ;)

I have tried an ultra bright white LED and all it did is make me appreciate how short a microsecond is, but it did not result in any light, not even a visually detectable light flash when held really close to the eye.

Sure.. but it's not the eye being able to see it that we care about! I care about the sensor in the camera.. I can look at the image for visual gratification after the fact ;)

Just because the rods and cones don't get enough energy to cascade doesn't mean that silicon doesn't...

You would be surprised to see how sensitive the human eye is. A dark accustomed eye is able to see light flashes of 10 individual photons;

Well, regardless of if my LED's will work-- your stuff with the spark gap is STUNNING. I read the original writeup when he first did it.. still one of the best Mad Scientist projects I've had the pleasure of seeing written up. I've been tempted to make one, as you did. I must admit those kind of voltages give me the heebie jeebies- I once got a taste (via a slip while trying to adjust it) of a flyback transformer in a monitor, and there's a good reason why it's called a flyback- it's pretty much what happens. Hand was numb to the elbow for days..and I was lucky that's all.

I've always considered whether a mechanical (!) shutter (like a rotating slot in a disc) could further shorten strobe length, in that you could sync the strobe ignition and the passing of the "slot" shutter so that the strobe duration was limited by the physical barrier of the disc. Never done the math on it, I suppose the factors in play are the size of the slot/window in the disc and how fast it's being spun. I would think that using a photodiode (infrared!) and LED, you could sense the slot as it passes, and therefore be very accurate in terms of timing, and the idea would be to trigger so the flash begins during the passing of the window. The light is "interrupted" (in terms of what comes out) by the disc then blocking it. It's a project I want to try, and it wouldn't be very difficult to at least do a proof of concept. I guess I'll have to sit down and actually do the paper design and see what the issues would be...one that I have considered is that the rotation speed/effective size of the window could be drastically reduced by secondary (or even more) disc/windows being rotated in the OPPOSING direction, by varying the speed of rotation, the windows would only align for VERY short time periods even at reasonable rotation speeds.. mechanical stroboscopes are far from new, but combining them with other technology might just work.. hehe as I sit here and think about it, I'm envisioning a stack of counter-rotating discs.. and then instead of a triggered strobe, just good old Thermonuclear Fusion.. mount the thing in a window or skylight, use a few mirrors....

I have also considered an ultra-fast shutter. Seems you can use a harddisk actuator to achieve sub-microsecond shutter times for lasers: