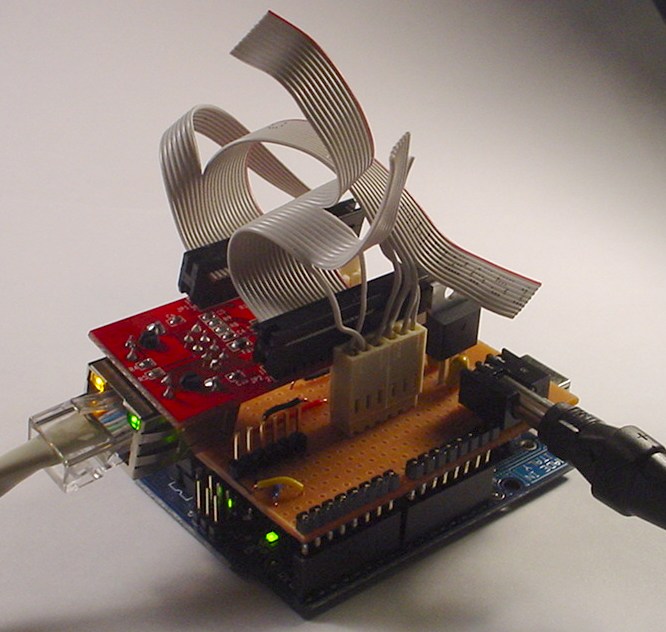 You can tell it's a prototype from the excess wiring. :-)

The header to the front left of the board is for attaching a cable to upload sketches to something like a Bare Bones Freeduino without requiring the FTDI USB cable. (More details on that in my recent post in the hardware forums.)

The shield celebrated its successful birth by logging onto the Arduino IRC channel and responding to messages directed to it.

Yay! Great to see it in front of my eyes! Brilliant!

Should be fun to play with once I get around to making a protoboard to handle it. 3.3v is a bitch.

well then i can wait for release then lol

well then i can wait for release then lol

Ah, don't listen to Cheater--he just doesn't want you to have the fun he's having.

It's even more exciting to watch follower talk to himself in irc about it :P

It's even more exciting to watch follower talk to himself in irc about it :P

Oh my, YAPBYFIWTW*, will add to my watchlist

* Yet Another Project By Follower I Want To Watch

is this project dead ?

any update on netduino?

It's essentially on a permanent hiatus due to the existence of the official Arduino Ethernet shield and a couple of other shields using the WizNet modules.

I'm still exploring the software side of things, you can check out my Flashduino page for that.