I'm trying to figure out how to send the ASCII value of a char to a function.

Basically I have a 2D array of the following structure:

I know I can declare

but how can I handle that more generally within functions.

Any good reference, I'm missing the keywords to do a relevant search in google. I feel like I'm struggling to handle the logic behind strings and char and numbers and how it's handled

Any help is welcome

Define what you mean by "ASCII Value". Do you mean the numeric value of a given ASCII character?

DuzMontana:
Basically I have a 2D array of the following structure:

If you compare your original post with your actual code you'll understand why the Sticky posts in this section ask you to enclose your code in code tags. You can add them now by editing your first post, selecting your code and clicking the # button in the edit window.

I'm not sure I get what the following line does.

DuzMontana:
Yes, the numerical value of a given character. Ex. 'A' = 65

I'm not sure I get what the following line does. 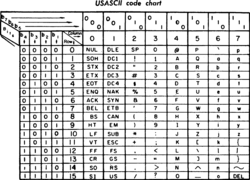 ASCII (/ˈæskiː/ (listen) ASS-kee),: 6  abbreviated from American Standard Code for Information Interchange, is a character encoding standard for electronic communication. ASCII codes represent text in computers, telecommunications equipment, and other devices. Because of technical limitations of computer systems at the time it was invented, ASCII has just 128 code points, of which only 95 are printable characters, which severely limited its scope. All modern computer systems instead use Unicod...

.. is the same as
how to send a char to a function

Thanks for the reading, this was helpful, got me on the right path.

I realize that my post was ambiguous. Just to summarize what I'm trying to do:

After reading the links I reached the string constructor page
http://arduino.cc/en/Reference/StringConstructor

let me know if this code makes sense:

Both lines accomplish the same thing.

Or in other words 'A' is just another way to write 65. Just like you could also write it as 0x41. They all represent the exact same thing.

Computers don't do letters. Only numbers. That's why ASCII was created in the first place.

Thanks for all your help