Will the maker movement last?

since I'm a older guy, this happened before when i was young, building kits and such....then it died off and all the parts and kit stores dissappeared.Do you think it could happen again with the arduino and the rest of the maker movement, i hope not...i long to see some return of the componet electronic store. They say radio shack is supposed to return to a parts like store, but i doubt it will last, don't think there are much makers here in my state, seems its in other countrys and the west coast...I guess only time will tell.

oldPGMguy:
They say radio shack is supposed to return to a parts like store, but i doubt it will last

Who says that?
I still go to my local Radio Shack from time to time when I "need" a part. most of the time they don't even have it and the times they do they charge so much for it i walk out the door feeling dirty.

However the price is not my big complaint, it's the lack of quality parts, or any parts for that mater. They came that there is no $$ in components, (apparently they have not seen what my store is charging) but if they don't have one item I need I must order it than why would i pay 4 ~ 6 times as much for everything else I was going to buy since I am ordering stuff now. The mail order ones are making $$ perhaps RS should give that a shot again. **Better yet can you imaging going to a Radio Shack the size of Home Depot **

They say radio shack is{/quote]
Who is this "they" organization? I hear a lot about what "they" are doing, but nobody can ever tell me who "they" are.

Why does the maker movement have to be tied to old-school corporate mentality? With the rise of a new technology commonly referred to as "the Internet" it is possible for people to run specialty businesses out of their garages.

Instead of asking a high-school drop out inside of a store for advice on a circuit there are quality online forums to get advice. Distributors like Farnell, Digi-Key, and Mouser have optimized their processes for credit card orders with order quantities of 1. Shops like Sparkfun (ugh) and Adafruit exist and encourage others to pop-up all the time.

Lastly, open source hardware/software/firmware projects that are common place today didn't make sense 15 years ago. I remember telling my senior design advisor that I would "use the Internet" to finish my senior design project. His response was, "oh yeah right. Like there are people in the world who will work on a project for free!"

Will the movement last? Yes it will always last. People won't give up on invention or creativity. Will it look the same 5, 10, 25 years from now? Of course not, that's the point...

radio shack is a chain of electronic stores....early on they sold all kinds of kits and parts, now its mostly cellphones and such..actually I did finally find an electronics parts store near me...except the prices are a little high,,exp: HC595 shift register for almost $6...but weigh it with shipping costs, and it may be cheaper. If I need a part quick, I know where to go

When I walk in the street where the dumpstore was, I miss it, every visit was a surprise. I also miss
the 3 shops selling parts in my neighbourhood. It's quite crowded overhere, but I still need to travel
40 miles to the closest shop now.

But... I don't miss the endless searching for parts. If I turn on my PC now, I even have a big choice
in components,prices and it's delivered at my doorstep. For the price of 1 project then... I can
build several now. Tandy, nephew of Radio Shack, certainly did now what money was.

When it comes to maker-mentality, I guess some will never find a solution without instruction, even
when all they need to do is knot two ropes to one. I do guess creativity of others is unstoppable though,
and has been since we started walking on two legs.

What's the lifetime of an arduino ?
A teacher of mine once told me making stuff is useless, everything made will brake down sooner or later.
I guess in time nobody will remember the arduino. But... If a similarduino is created with x-times the
capacity and support for about the same price, would that really be a problem ?

@Simpson_Jr...yeah i know what you men.....something better always comes along....i just miss buying parts in my area....partly because i can see what i'm buying

oldPGMguy,
take a rbrowse at dipmicro.com, lots of clear pictures mostly inexpensive parts, cheap, fast shipping.
I buy a lot of my thru hole stuff there.

In regards to how long Arduino will last has a lot to do with it's user base. As long as it pleases the users and can attract new ones it will do well. I once coded for a CMS platform called Post Nuke (now Zikula) It is an excellent code base (PHP) but the user following fell off as they were slow to respond to the needs and wants of the users. Other CMSs offered the features and users moved on... Same happens with electronics.

I used PIC controllers in the past and found them to be a excellent product but rather a PITS for a quick project. They also has a new product each week!

Certainly in the future more and more powerful boards will become avalible and probably not called Arduino. In fact there are already many ARM based boards that can handle much more complex applications. However the large user group and tremendous code library from user contributions will keep the Arduino platform alive for as long as ATMEL keeps manufacturing the AVR chips used in the Arduino boards. There will always be projects that are nearly a perfect fit for the Arduino platform as is.

.partly because i can see what i'm buying

I missed that at first. However, I made a realization. The price of 2 or 3 different versions of a part at Mouser or DigiKey was still less than buying from an overpriced retail outfit like Radio Shack.

I miss locally based surplus shops where you could find non-catalog standard items. However, for generic parts no retail store will ever compete.

Older guy here too, was into the kits and so forth back in the day. Made my own PCBs in the basement, direct resist at first, then got into photo-resist. I always thought the thing that killed it back then was a combination of consumer electronics getting more complex but at the same time cheaper with imports and such. Add to that the use of surface-mount components that were pretty much out of hobbyist reach at that time, these helped enable the complexity. People were willing to buy kits or roll their own, even if they just broke even more or less cost-wise, but all of a sudden that approach was relatively expensive and not competitive from a functionality standpoint.

I'll never forget buying a new digitally-tuned FM receiver for my stereo, it was only about an inch or so high, I couldn't figure how that was possible, so the first thing I did when I got it home was to remove the covers. That was the first time I'd seen SMDs; I was amazed. I remember thinking, there goes my hobby, I'll never be able to do that in the basement.

Then I was out of hobbyist electronics for a couple decades, raising a family and so forth. Got into the microcontrollers earlier this year and again was amazed because now I can do all sorts of things I only dreamed about back then. What I'm not good at envisioning is what confluence of circumstances will render the current situation unsustainable. So I hope it continues for some time, I'm having way too much fun!

@Jack Christensen....good post....i too made my own pc boards and still do..a friend of mine got out of the hobby, due to health reasons and gave me all his equipment and parts...in all this stuff was a 100 sheets of PNP papers...now i can make all the boards I want...as for surface mount parts...i have thousands of parts from removing them from boards i had or found...yes i still remove parts from old boards for the parts...been doing that since the early 60's....saving everything

I've just recently made my first PCBs with Eagle, sent one to BatchPCB and some others to DorkbotPDX, and I have absolutely no desire to ever make my own again! Bit of a learning curve with Eagle, but once I was through that, life is good! The boards are really nice, I can't see ever coming close at home. Worst part is the waiting, the turnaround time is the price you pay for inexpensive PCBs. DorkbotPDX is faster than BatchPCB, the boards are at least as nice, probably better. Pricing is different. DorkbotPDX has no setup fee, no delivery charge in USA, and a lower price per square inch, but you have to buy your boards in multiples of three, which has actually worked fine for me so far.

Nice hearin' from ya! I guess I have no choice on the growing old, but I refuse to GROW UP!!!

I am liking iteadstudios service so far (just 1 order).
Ten up to 100mm x 100mm boards, $29 with shipping. Way finer detail than I could have ever done by hand - plus the slkscreening solder mask. Cross Roads Electronics
Working another design now to run thru iteadstudio - ATMega328, 8 74HC595s, 8 ULN2803s, 5V regularor, headers to go off to 8 displays. Will add a FTDI USB/RS232 card as a seperate module, not skilled enough yet to solder the 28TSOP with rework.
2nd set of boards will receive the headers and hold two 2.3" Kingbright displays and a pair ULN2803 to drive them.
Both are using the full capacity of the eagle board limit! Gonna have to step up my license soon, or make a bigger push into surface mount.

@CrossRoads, quite a project, that sounds like a lot of real estate. iteadstudios prices do look good if you need 10 boards or so.

They have lower pricesfor smaller boards too.

$9.90 plus shipping (~$5) for ten 50mm x 50mm boards.
I am not even going to try homemade boards at that price!
http://iteadstudio.com/store/index.php?main_page=product_info&products_id=173

Look at the size of these displays - I hefted the box and thought "Did I screw up the order? 8 parts can't weigh that much", they are monsters!
Dug out some ULN2803s, gonna see if I can fire one up during halftime. 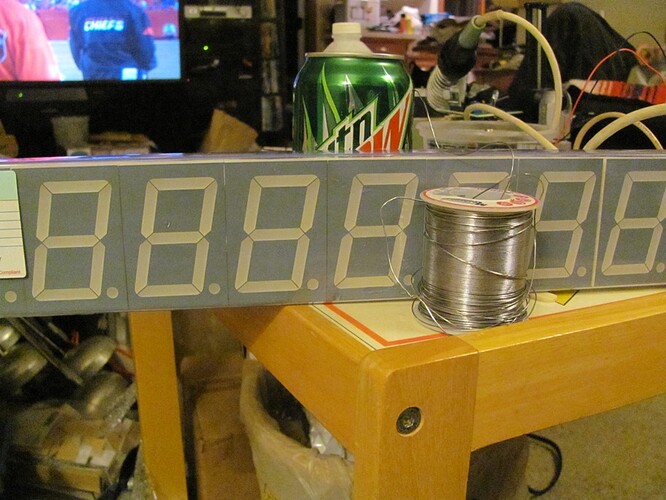 Good deal on the boards, heck even if you only needed four or five at that price.

Wow, impressive display! Where do such monsters come from?

Sweet! I've been looking for a larger (not that large, maybe 0.6" tall digits or so) display for a digital clock, preferably six digits with colons in the appropriate positions. Thinking I may have to roll my own out of single- or double-digit units. Haven't checked Newark though, will head over there. Interesting combination of hobbies, electronics and fencing?

Flying too, tho haven't been up since I started fencing a lot - gas prices doubling didn't help.

I designed/built my own electric fencing machines, and now my own PCB ATmega1284 based Arduino derivative with integrated features of a couple of shields as well.

earlier version & its remote, before all features were added

I have several smaller versions as well; lights & sound without the Time & Score digits; and just the score lights.
And now my card.
![](http://www.crossroadsfencing.com/Bobuino & 25 features.jpg)
Cross Roads Electronics for the features summary