Hi I have an Idea for something. I wanna make a low-power wearable project. I wanna attach an rgb tricolor led to a attiny85 and have it run off a super capacitor. Also I'm going to attach a motion switch to wake up the attiny85. The problem is that I'm having a hard time finding an example schematic for a simple capacitor charger. Most are rated for a much higher voltage or are controlled by a manual switch.

If I remember correctly if you connect a capacitor directly to power (without over-volting it), It will eventually stop drawing power. Because it's technically an open circuit (on the inside of the cap).

Okay. So...I didn't really wait to get a response. I tried something. And I need someone to explain what I'm doing wrong. Don't worry I used a simulator. I wouldn't try to use real parts right now. 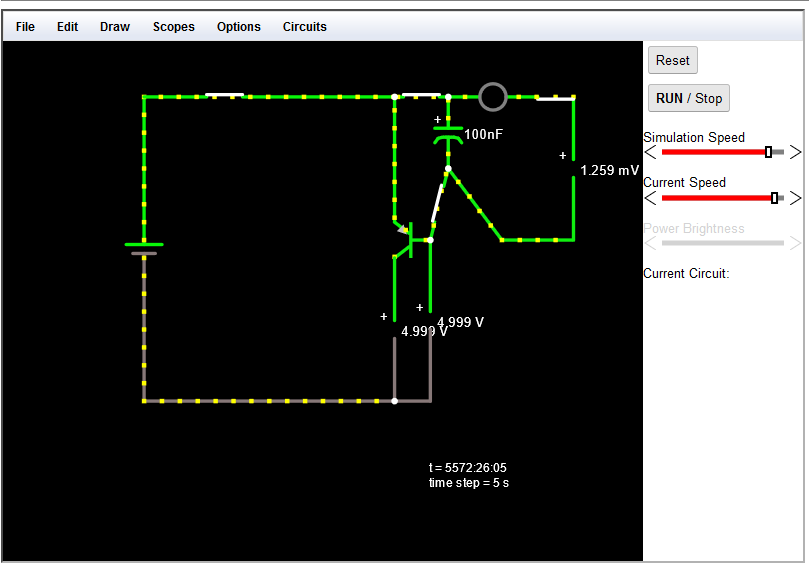 The simplest way to charge a capacitor is to put it in series with a resistor, which will limit the current, and connect them across a power supply of the required voltage.

While theory states that the capacitor will never completely charge for most practical purposes it can considered to be fully charged after 5RC seconds.

If you want it to charge linearly then use a current source instead of a resistor.

I don't know much about wireless charging except that coils on both sides have to be "close" for a good magnetic connection.

Capacitors make lousy "batteries". An ideal battery would hold it's voltage until it's nearly dead and real batteries sort-of discharge that way holding most of their voltage over most of their life. A capacitor discharges very quickly at the beginning and then the voltage levels-off when it's mostly discharged. (It discharges more-slowly simply because the voltage is lower and less current is flowing, assuming a constant resistance load.) Take a look at the graph on [u]this page[/u].

If I remember correctly if you connect a capacitor directly to power (without over-volting it), It will eventually stop drawing power. Because it's technically an open circuit (on the inside of the cap).

It will draw maximum current when first connected, limited by the capabilities of the power supply, or series resistance, or internal capacitor resistance. A "big" capacitor without some intentional current-limiting might damage a power supply (excess current).

Once it's fully charged current no longer flows (except for some small leakage current).

I don't think capacitor + LED is a good idea. A small battery will probably provide much more satisfying running time.