I am looking to control the output current of an LM2576-ADJ switching regulator by an Arduino uno, I will be using this circuit to charge an NiMh battery, and I am looking for general advice on the topic.

In order to maintain a current level the LM2576-ADJ needs 1.2volts on it’s feedback pin when the set current is reached.

I have a 0.1 current sense resistor and I measuring the voltage across it and have fed that voltage into Arduino’s pin A0, I have the internal 1.1 V reference set on the uno to have maximum precision. (I want to control current from 700 to a max of 2.2 Amps which will depend on the value I put into my code)

The Arduino’s pin 6 generates a PWM which through a low pass RC filter (voltage buffered by an op-amp) is fed into the feedback pin of the LM2576-ADJ regulator.

I have written a very basic code

I wasn’t expecting much out of this code but for a crude first attempt it works reasonably ok, for a set current of 1.5 Amps I am getting a fluctuating current between 1.45 to 1.58 Amps and these are just the maximum and minimum limits the fluctuation isn’t all that crazy to be honest.

I am looking for a better way to program the circuit reduce the variation in current and bring it close to the set value with minimum variation, would appreciate if anyone can offer any help.

update: The approach works OK for resistive loads but as soon as I connect the battery pack readings are all over the place, need to have better software implementation.

Any ideas would be great.

Thanks for your response Tom,

I have made great progress on the problem,

First of all I have attached a rough hand drawn circuit diagram of the circuit I have hooked up, earlier today I was thinking that may be I needed a PID control for my particular problem so I started reading some documentation concerning that and also downloaded the Arduino PID library to give it a shot, due to my lack of skills I wasn’t able to get any positive results out of the PID library but all this reading did give me a hint that instead of using if’s and while’s to control my current I need to have an equation based controlling and this is the simple code I came up with.

in essence it’s a PI controller and after tweaking the constants in the equation I was able to get great results, my earlier approach worked awfully especially at low current values below 1 Amp and just to give an idea of how this works, I have uploaded a code for 0.8 Amp and have attached a picture of my meter reading which is very close and stable. I am really excited! my first step towards building a programmable universal NiMh charger is nearly completed

Failed to upload the multimeter pic for the 0.8A set point, so here it is. 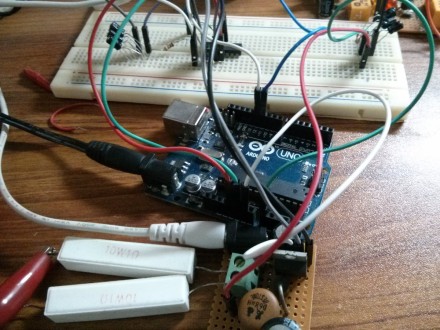