Hello everyone! I am a noob who's currently doing Arduino beginner project #5 "Mood Cue". My question is that if I do not have any capacitors in my circuit will the servo motor run still? My servo is not running right now and that is the only thing i could think of that would stop my program from working. I bought all my pieces separately and don't have capacitors unfortunately, here is the code and setup i followed exactly found through this link: 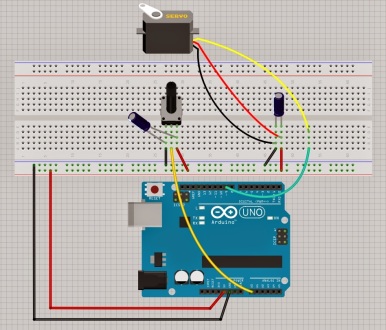 Arriving to this project means not only that you are starting to familiarize with Arduino, but also that you are determined to be able to create amazing things with it. So first of all, we would li…

If anyone has insight or recommendations that would be greatly appreciated.
Thanks!

A lack of capacitors would not stop the servo from moving. However without them any movement might be erratic.
What is shown in the serial monitor when you run this code?

The capacitors won't cause your problem but that code can never have worked. The instruction that moves the servo is missing.

After using the code provided by Steve and a few tweaks it seems to be working so thanks so much for the help! My serial monitor provides the right information as shown in the walk through thankfully.
Thanks for the help!