Hey here is a little controller i built, because there wasnt any on the market that fit my need, and i was too cheap to buy a co2 controller... even tho this son of gun cost me 3x what a factory built one would by the time i ended up with a properly working unit.

This controller will :
Monitor and control Co2 ppm from 0ppm - 10,000ppm, and will turn on and off a Co2 regulator based on your Co2ppm and Dead Band Settings.
Monitor your air temp inside your grow room from -50F - +200F. (Well beyond what is normal )
If running a hydroponic system, this unit will monitor your reservoir level via a float sensor installed onto the side of your reservoir or mounted to your water pump.

The Dead Band setting incase you are not familiar with Dead Bands it is an area of a co2 range where no action occurs. IE: If you set your Co2 set to 1200ppm and have a Dead Band setting of 100ppm. The controller will allow the Co2 ppm to drop to 1100ppm before bringing back on the co2 reg. Then shut the reg back off again at 1200ppm or greater. This is important so you do not short cycle your Co2 Reg which means to turn it on and off multiple times and hour. Witch can cause premature failure.

As well as monitor and control co2, temp and res level, This unit also has a built in clock for keeping track of the time of day. Its very useful if you are like me and keep a physical written log of PH, Temp, Res level, Co2 and nute solution PPM. 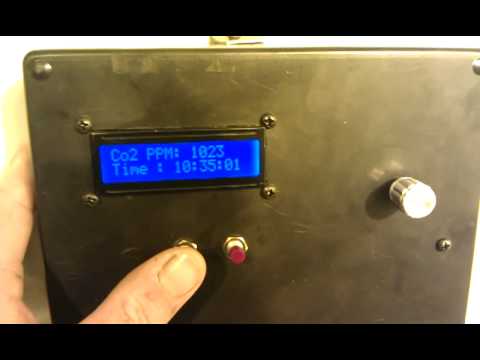 also none of this uses the adruino uno or any shield, its all put onto 1 solid board made from eagle cad with the arduino chip running solo with a 16Mhz crystal and a cpl caps.

As an aside, in the same article, it spoke on using yeast as the generator for the CO2.. brewer's yeast and sugar is apparently a great way to "naturally" produce CO2, less costly and more environmentally friendly than cylinders. I would think that using yeast you'd have little danger of raising levels too high; though I suppose the only "regulator" would be a feed system for the sugar.. but that would take hours at least, I would think, to change the air CO2 concentration.. Just a thought, anyway

If I can find the article I'll post a link. Interesting read, was a really good discussion of the use of CO2 in greenhouse hydroculture and it's ups and downs. I'm sure you already know this (but I'll say it for the kids reading this), but please be careful.. Carbon Dioxide displaces "Normal" air and it's possible to actually black out and then subsequently perish if you make too big a mistake and walk into a room at some ridiculous level of CO2 concentration. I'd hate to hear a software glitch led to some tinkerer's untimely demise!

Haha yea i have allready had a cpl mistakes and dumped a 20 lbs tank into the room in a day n a half, the co2 is on a reg so it dosnt dump huge ammouts out at a time even if the selnoid valve is open, but its a waste of money.

I really like your data logging via serial idea, 2 days ago i ordered. a couple PH modules from phidgets and once i implement that i will DEF add data logging, ideally i would love to bring this thing to market. The fact that it has a resivor level sensor and alarm is SO HUGE, I have come home to a garden full of 75% dead plants due to a leak.

As far as pumping up the co2 levels 5x-10x to kill bugs i will for sure read up on because once you are half into bloom you cant really use any harsh chemicals to treat the plants due to it effecting the product.