Floating pins - what is wrong?

I am working on a small PCB to combine single LEDs and a shiftregister. The idea is as in the schematics attached.

So, it would be possible to control a signal LED, or a series of LEDs with the shift register. The board looks also as in: divshot.io

Now, I ordered the board from OSHpark OSH Park ~ - and soldered the components.

But what happens is that there are many LEDS “listening” to one single signal. See the video at ledlogics on Vimeo

Have you clicked on that image. It is stupidly large, too large to see things.
Please resize it to no more than 1000 pixels wide.

I note you have no decoupling capacitors though.

Anyway the circuit looks plausible, one LED is out, there's a fault which
might be soldering, fried LED, short or open circuit for some other reason,
multimeter will find it.

Note that the way this board daisy-chains is going to prove problematic if
you strings lots of them together, or with long cables. Logic signals aren't
really designed for transmission over long distances and issues like cross-talk
and signal reflection can bite you. You could buffer the through-signals on
the board so that the driving end only has to drive the first board. A hex/octal
non-inverting buffer chip such as 74HC541 would be the simplest way.

Unlike the ubiquitous 74HC244 the 74HC541 has point-to-point bussed
pinout which is simpler to use.

In your video I only see 2 wires going to the board. What are they? From the position on the board, they don't seem to be going to +5v and Gnd inputs.

I used resistors of 300 Ohm. Indeed, I have not soldered capacitors yet. First, it was not clear what their value should be, second, if I would use the path without the shift register, I thought it would not be necessary. What should their value be?

Also, I do power the LEDs from the USB suplly. I tried it before on a breadboard, and it was working.

Any ideas where/how to debug this further?

The setup with 2 wires is: 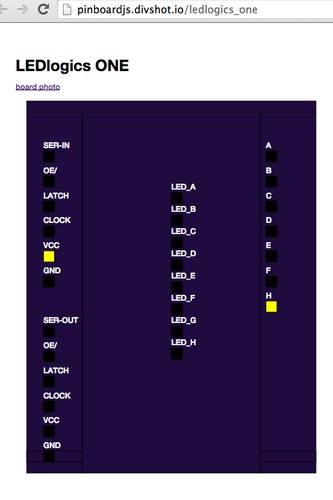 farsi:
The setup with 2 wires is:

Where is the board getting it's ground from?

good point, I thought the LED H pin goes to ground - so, I would need at least 3 wires? I will post also the code later today.

You need a capacitor, 0.1uF ceramic. Have you also soldered up power and ground on the shift chip?

I see, the cap would prevent spurious signals from the LED toggling, toggling the shift chip, and as such the other pins.
I will check that first thing when I am back home. Thanks for the pointer. (Also, I will check the soldering of the shift chip).

Interesting, I soldered the cap (0.4 uF) but the board gets more stable if the GND pin of the shift chip is not floating, i.e. tied to the Arduino GND.

That's not surprising at all XD

Leaving the IC GND pin floating means the chip wasn't capable to provide current to the LEDs and wasn't able to recognize the signals you were sending to it.

If the capacitor is not a ceramic type it is not doing a good enough job.

Your schematic shows the carry-out serial connected to pin 7 instead of pin 9. That will prevent you from daisy-chaining them.

Thanks!
The idea of the board is to teach some basic digital electronics, daisy-chaining would be nice for advanced.

My current problem is still the spurious effects of LEDs going on/off, depending on how you touch the board/the soldering contacts. Maybe it is just my soldering skills that need to be improved, and getting the right decoupling cap. I’ll play with a fresh board from OSHpark in the next weeks.

My current problem is still the spurious effects of LEDs going on/off, depending on how you touch the board/the soldering contacts.

On the video, I can only see 2 wires connected.
On the schematic: CLOCK, LATCH, SER-IN are not terminated with any pullup or pulldown resistors.
Therefore, at minimum, there should be 5 wires connected for stable operation and to prevent the inputs from floating.

dlloyd:
On the video, I can only see 2 wires connected.
On the schematic: CLOCK, LATCH, SER-IN are not terminated with any pullup or pulldown resistors.
Therefore, at minimum, there should be 5 wires connected for stable operation and to prevent the inputs from floating.

This is what I said in reply #4 I don't think the full implication of what I was pointing out quite sunk in.

Thanks! Ok, that would make a lot of sense. I thought it would be possible to have only 2 wires controlling the board. But it seems not...