How can we make one? Anyone?
http://www.navipedia.net/index.php/Real_Time_Kinematics

Get a base station - see the other thread where you asked about this.

Please read the link. Of course get a base station. Can you be a little more specific?
I'd like to know relative position, relative to the base station. No need to know the exact coordinates for me. 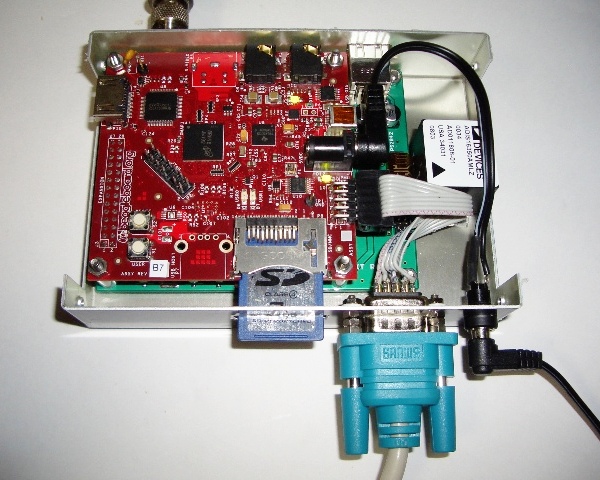 Want to fly your plane or drive your car using GPS signals, but finding that your receiver just isn't accurate enough to make things work? Well, MAKE subscriber Bruce Mueller writes in to point us at an impressive solution: an open-source real time...

Has anybody done it already? If not, want to work together?

I can't see that link from here, will read it when I get home.

For anyone who is interested in working with me:

goGPS is a software created for processing GNSS raw data. It was originally written specifically to work with GPS single-frequency low-cost receivers but now it can fully exploit multi-constellation, multi-frequency, multi-tracking observations.

Want to fly your plane or drive your car using GPS signals, but finding that your receiver just isn't accurate enough to make things work? Well, MAKE subscriber Bruce Mueller writes in to point us at an impressive solution: an open-source real time...

Is there anyone who would wish to have this capability using Arduino?
Can you think of any applications?
Am I the only one?

Are you saying you're using a phase locked loop to detect variations in the distance traveled by the carrier based on phase changes of the carrier?

That sounds spectacularly difficult, and bloody brilliant if you can make it work.

I have not. Others have in the links above. Do you think the Arduino would be a bottleneck?

sbright33:
Do you think the Arduino would be a bottleneck?

I don't see how, since there doesn't seem to be any part of this problem that is within the capabilities of an Arduino. I imagine it'd need a dedicated hardware platform.

Yet the beagleboard works?

From viewing the links, it appears to be possible. Question is how do you apply it? Need to be able to navigate so the board needs to provide a signal that can be used by the flight controls. It is one thing to have a transmitter in your hands and control the direction and the landing. But to have your aircraft fly a mile, or a hundred miles, away and to land where you want, a navigation system must have apropriate signals from the GPS.

I like the approach here, using RTK to getfaster and more accurate coordinates. For example, if your unmanned airplane is small and coming into an airstrip, a GPS signal that is off by a meter can cause the plane to veer off course and require constant corrections. In the last seconds, even if you are controlling it via computer, cell phone, etc, standard GPS may be too slow and you're in for a rough landing.

Current successful drones, such as the Predator, have been developed from RC technology and the first people recruited to fly them were hobbyists from Minnesota. UAV attempts that are scaled down airplanes have had major problems and cost much more to develop. You guys are in the position to pioneer the development of an open source GPS navigation system. Current systems I have found are quad copter specific and expensive. One system from China and currently not available, uses Google Earth. Click on a spot and go, but not likely super accurate.

A tape measure? your local DIY store, a couple of dollars?

First let's get the data for a particular location, then I will apply it! A tape measure will be difficult over 500m.

A couple of things:

This stuff works I have seen it in practice and it is pretty neat for those who have the need for it. I wonder whether SA would be turned back on if there were cheaply available RTK systems. The combination of RTK and some of the emerging and established technologies is a scary mix for some people.

So it will work, NOT real time, with Uno! A few minutes delay would be cool for accurately measuring distances.

I think the Due will be out in volume and have some kinks worked out before an RTK system was ready for prime time if we started today. The Arduinos are great platforms for the right task, but sometimes they are vast overkill, then I go to the ATTINYs straight from AVR Studio and some times they just do not have the capabilities.

Does anybody agree that using a Uno is possible with only a reasonable amount of effort?

sbright33:
Does anybody agree that using a Uno is possible with only a reasonable amount of effort?

I don't see how anyone could possibly judge that unless they also knew how much code, data and processing power was required to implement whatever it is that you think the Arduino would be doing in this solution. If you want the answer to that question, I think you need to find somebody who understands the solution - or learn about it for yourself - so that you understand what the Arduino would need to do and what resources that would need.

You could read the many links in a row I posted if you were curious. It does seem possible to me, although not in real time with frequent updates. I was hoping to get a discussion going with reasons it will not work. I believe the only limitation is the processing power of the Uno. This is why I said it will not work with frequent updates. Can we agree on that? If not, why not?