I need to control the brightness of a high powered star LED. I need to be able to reach 350mA. I have tried using transistors. I tried a 2N3904, then then a MJE3055T and both give the same results. I can only get up to about 250mA.

To test this I set a pin to its max output. “analogWrite(9, 255);” and I build a circuit similar to this. When I measure the current with my parts, I can only reach 250mA. If I connect the battery directly to the LED with a resistor where I can get 350mA, I can notice the brightness difference.

Any help would be greatly appreciated. Been trying to figure this out for a couple months now. Thanks in advance.

I have tried a resistor as low as 10ohm

This is my LED 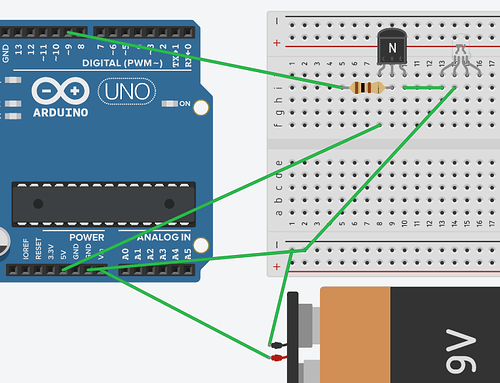 Of course the information you have given is meaningless because you have not provided a baseline.
A baseline is measuring the current with no transistor, just the battery and the led.
Once you have that, then you (or we) know that the problem is not your battery.
Next, you need a mosfet with a very low RDSon.
All of the devices you have mentioned are not the preferred devices.

These resistors would be dissipating either ~550mW or ~1W as heat, meaning you ought to be using a 3W resistor, not your usual 1/4W resistors.

Don't use fritzing diagrams if you don't have accurate representations of your parts - your diagram shows a 9v battery and an RGB indicator LED, but your post says you're using a 1W LED with star base and 18650 batteries.

You're asking a lot of the on-board regulator - you should use an external power supply for the LED (ex, a buck converter powered from the batteries); this also allows you to adjust the output voltage to bring it closer to the voltage of the LED, so you don't need to burn as much in the resistor. You should still aim for a voltage that requires at least 1 ohm in the external resistor, to give you enough control over the current.

Even better is to use a constant current LED driver, which will do a better job of regulating the current over a range of temperatures. I use AMC7135's, a cheap linear constant current driver (a switching one would be more efficient, giving you better battery life if using batteries). You can switch the low side of the driver with a MOSFET and even do PWM with the 7135's; with other drivers, consult the specs - you generally cannot PWM a constant current driver unless it is specially designed for it (such drivers will have an extra pin for PWM dimming).

Many people here will insist that you need a constant current driver for large LEDs; while it's a good idea and highly recommendedv (will probably extend lifetime of LEDs, and make them more tolerant to adverse operating conditions), it is not absolutely necessary.

Dr. Azzy,
good catch on the resistor. I didn't look at that.

Wow! thank you for the help, I am going to look at those options. I never even considered the resistance in the breadboard.

Appears you are running these as a high side switch as well. A better drawing would clarify that. It should be a low side switch.

It's not a hobby if you're not having fun doing it. Step back and breathe

If I wasn't having fun I wouldn't be doing it...

If I wasn't having fun I wouldn't be doing it...

Besides. it gives some real amusing stories of the success/failures. My latest was for my late wife. She saw a show with Tesla coils in it and asked me about them, so I proceeded down to my room to make one- in a room full of ESD's. Yep, it would light up cfl bulbs, but it ended up lighting up a bunch of other stuff too. Still, I had to chuckle about it, and the wife was amazed by the sparks from the coil.