Hi Guys i have a problem with the Pin Connection from the ws1903 to the arduino.

So ill do connect the arduino power to the 5V power supply, but the power + side from led is connect through directly to the 12V, that will result in 12V power. But the problem is the led is just on and doesnt running my program even though the arduino is ON. 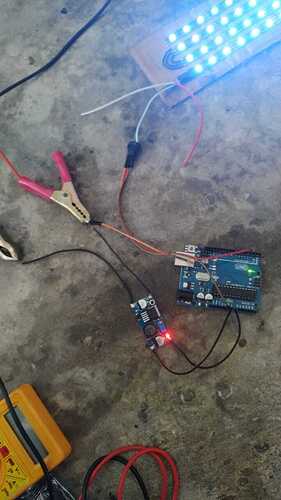 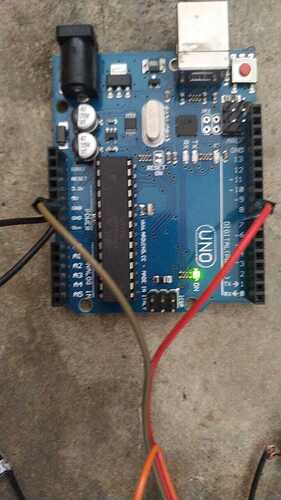 I am greatly concerned as to what your "12 V power supply" is there. With the ridiculous "crocodile" clips it looks rather like a car battery charger which would be an extremely inappropriate supply for electronic devices.

Now assuming it is in fact a proper regulated 12 V power supply, then if you have all the connections in the right order then it is unlikely to be the problem however it should be wired with both wires of each circuit kept snugly together as a pair, no open loops in the wiring.

Those separate red (+12 V) and white (Ground/ -ve) wires to the strip are where you connect the 12 V power. The other three wires take the 12 V power back to the regulator and Arduino and the data to the strip, all three kept together as a bundle. The step-down regulator should connect to the Arduino with very short wires, particularly the ground which is common to both input and output of the regulator so you only need to connect it to the output side.

it was a power supply from 220V AC to 12V DC. If i do connect the - wires to the those separate wires does it effect the arduino will get 12V supply in the data pin?

if its okay for the (-) power supply directly to the separated wires led (-), that does mean that i only need 1 GND in the arduino? because before i have try this pattern with 12V power 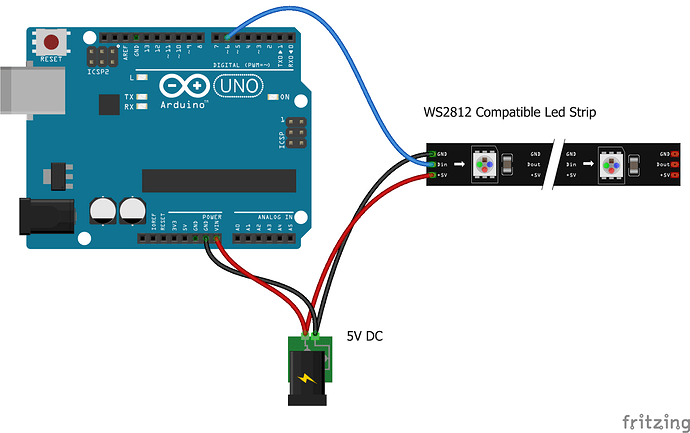 Not quite sure what you are saying and it doesn't match that diagram, but essentially because the LED strip is what requires the heaviest current, you need to connect the power supply directly to it. You can then use the ground (negative) wire coming back from the LED strip to the Arduino to both carry the data to the strip and power the Arduino.

The diagram above is almost appropriate for a 5 V system except that the power connector should go direct to the strip and the black and red, back from the strip to the Arduino. And as I always explain, they should be kept together as a bundle with the blue wire.

And again, because you had the wires apparently connected to the right things even if not in the neatest order, I don't think this is the reason it is not working. We need to see your code, posted according to the instructions.

To make it clearer here is my diagram for the component to power up 12V LED strip, before i got it turn on but idk why right now it cannot be turned on, is it maybe because the voltage to power arduino in the Vin Pin is different i use it 5V right now, if you have a better ways please guide me 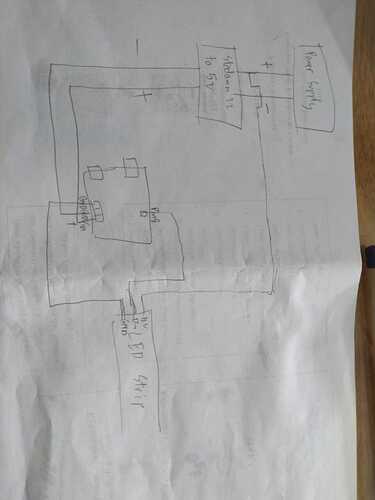 I am sorry, if you are using the "Vin" pin on the Arduino in any way, I simply am unable to assist you.

Is there any other way or which pin should i use? Sorry still new here

The vast majority of addressable led strips have three pins.

If you have a 5 V power supply - which means it is regulated - you connect that to the "5V" pin on the Arduino, because 5 V is the voltage on which the Arduino actually operates.

Whilst it is possible to power the Arduino with 12 V on "Vin", it is inadvisable for a few reasons - the on-board regulator is of very limited capability.

I have try this connection but still not working, it just shine white, the animation does nto woking. how can i insert my coding? 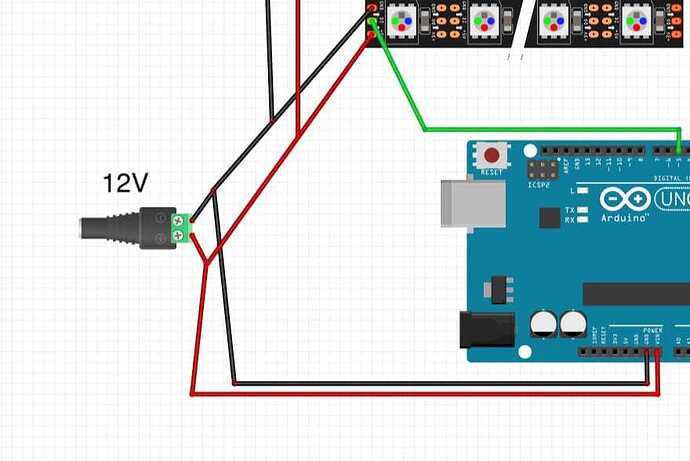 Insert your code between code tags. It is the < / > icon.

Your connection to Vin should be OK if no other components are connected to the Arduino. If you need to connect other components to the arduino, care must be taken. Ask here for advice before you do that.

So add 470 ohm in the data output pin? Btw do you have your diagram for your project? And is this is the module you mean because i never use the signyal shifter yet 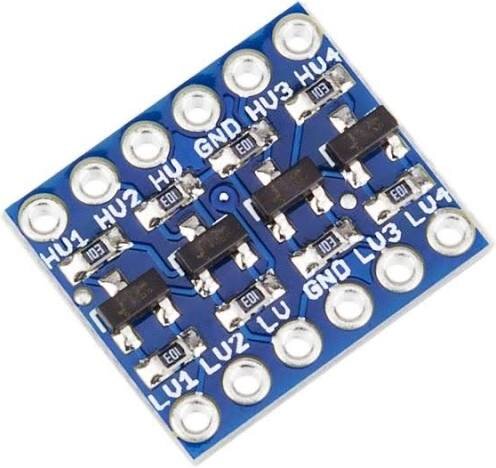 danieltianussan:
And is this is the module you mean because i never use the signal shifter yet

Not it s not. That module is for level shifting with I2C signals and very effective for that purpose. It is useless for driving Addressable LEDs.

It is the module I meant, but my meaning was: if you have one already, try it. But if you don't have one, don't buy one for this purpose because it is not guaranteed to work.

Paul__B is correct, with a 5V arduino, level conversion should not be needed. Post your code so we can check that.

got the problem solved, thanks to all you guys. Look like the IC is burned that's why the led is just shine white

That's why i find that it's illogical if the led is not on, because arduino will not have a problem running with 7-12V.

danieltianussan:
got the problem solved, thanks to all you guys. Look like the IC is burned that's why the led is just shine white

Glad you got it working. What IC is burned?

danieltianussan:
That's why i find that it's illogical if the led is not on, because arduino will not have a problem running with 7-12V.

I don't understand what you are saying.