Labeling: Have any tricks/tips for identifying your DIY PCB's pins etc.?

Greetings,
For my project(s) I've decided to not going the manufacturing route, but I still need to find a way of labelling the pins and components. I'm not using a mask, but the board will be painted/covered. I'm not talking about hand drawing them on with markers, :D, trying to keep it quality. Although it doesn't exactly have to be Arduino quality.

One option I was thinking of, would be to outsource a sticker design that covered the whole board. Which layout had the numbers and connections exempt. So when the PCB is painted/paint marker/covered it would leave the number behind.

But I'm always open to other solutions.Care to share any tricks or tips how you did it? Or is there a local service I could inquery about doing the printing? I wouldn't even know where to start searching for such a thing. Trying to avoid services online. Maybe there exist a very tiny stamp? lol

I print labels and trim them, some people make a giant one that covers the entire board with marking and footprints and jumpers then poke holes though it where needed

or the other way I mentioned 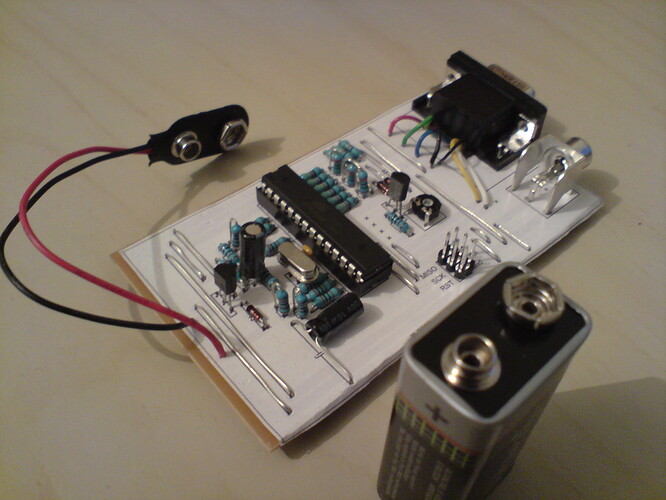 dritchie0042:
One option I was thinking of, would be to outsource a sticker design that covered the whole board. Which layout had the numbers and connections exempt. So when the PCB is painted/paint marker/covered it would leave the number behind.

That would cost about the same as having your board manufactured, complete with screen print.

Why not print out the board layout with all the pins labelled on it?
That way you can put the unlabelled board next to the printout and see exactly what goes where.

Since you are making your own boards I suspect you have a laser printer. A clever method I've read about is to print a mirror image of the identifying graphics and text and apply it to the etched board in the same way you'd apply the etch mask. Side note: Vinyl used in the signage industry works VERY well (image below) for PCB making. It's cheap, all of the toner gets transferred, no need to soak and rub off remaining paper. - Scotty 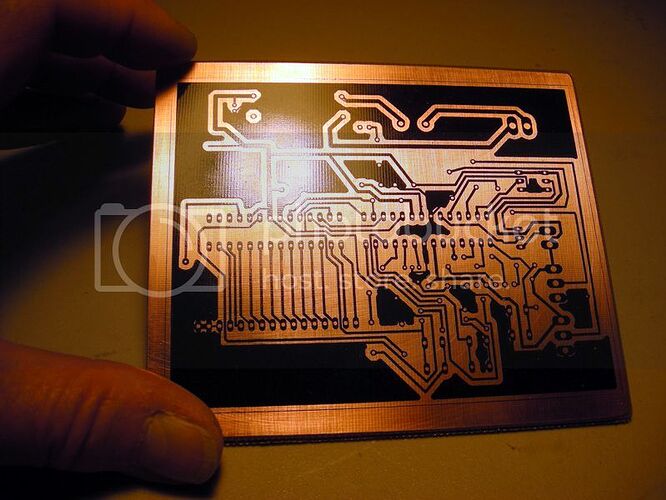 scottyjr:
Side note: Vinyl used in the signage industry works VERY well (image below) for PCB making. It's cheap, all of the toner gets transferred, no need to soak and rub off remaining paper. - Scotty

Scotty, I am interested in the technique using vinyl. Do you have a link for a tutorial or detaisl of the process?

Make the markings in copper as part of the artwork. Be careful not to short traces together.

Where are you guys getting stickers printed? I've been trying to do something similar although not on the PCB itself but for the enclosures I house my projects in.

My idea is to have a sticker of say "Wireless Temperature Logger" or what ever that particular project is. Peel out the letters and essentially get left with a stencil background of the writing and place it on the enclosure and then spray paint over it. Now pull up the sticker background and have my writing on there looking nice and professional

I've had a hard time finding a place to get or make such stencils/stickers. I looked into those cricut hobby cutters from Hobby Lobby and such but they look like they can't cut out anything smaller than 1" lettering.

I don't go so fancy - just use a Brothers label maker (electronic printer version of the old Dymo squeeze out a letter at a time label maker).

Pulsar makes a film that would do what you want. But, you simply transfer the film and leave it. No spray painting required.

Pulsar makes a film that would do what you want. But, you simply transfer the film and leave it. No spray painting required.

Now that's an interesting one. I'm not sure how they get all kinds of colors even though it says you print with a black and white laser printer. I'm very intrigued and will look further into this. So the plastic transfer gets left behind though? That may be a bit of a bummer. Most my enclosures are aluminum boxes and that may look funny because you'll see the clear plastic transfer on there. I'll look into it though. Have you tried it?

I miss read. I'd need a color laser printer since all my "branding" is in red.

I have only used it on plastic. The carrier is removed, so no, the film itself is not left behind. The way I understand it is that it basically bonds and colors the toner and the toner is all that is left behind, now white instead of black.

I have never used their color transfer, only the white silkscreen and their green soldermask films.

I don't know for sure that this will work, but perhaps an inkjet transfer using the hybrid approach (that involves sprinkling toner on the ink while it is still wet) might allow you to play with different pigments. But then, where would you get red toner (powdered pigments might work, though.)

I would think you will have trouble transferring anything involving heat to an aluminum panel though because the panel is a great conductor of heat. Preheating the panel might help, perhaps.

That does sound pretty slick. I might have to look into how much color laser printers are

I've tried looking at silk screen options but those are way to expensive to have done. Perhaps a home silk screen process might be feasible someday but they look quite involved.

I am interested in the technique using vinyl. Do you have a link for a tutorial or detaisl of the process?

Thanks for the wire wrap link Crossroads. Those do seem like good prices.

Glad to help. Wirewrap is great for digital prototypes. I tried a project recently using strip board to make a breakout board to drive 7 segment displays - took so much fooling around to seperate a couple of traces to have a unique common cathode for each digit that I quit after the first connecter, and went to wirewrap instead and had all 56 digits wired up in just a few hours.