I'm building a fairly large setup using WS2812b strips and a Teensy 3 + OctoWS2811. I came across a similar post here - but there is one noticeable difference which is that although the wiring is similar, my project involves 8 entirely separate displays (of 3 strips of 60 LEDs each) rather than one big display wired into groups. My wiring diagram is attached.

I've come across some advice to use a single large power supply rather than smaller separate ones. This is tricky for what I have in mind as the displays may be spread out within a space - I'd like to avoid trailing power cables around (i.e. there are already wall sockets around a room). The control data I plan to run through RJ45 cables. If the distance gets too great, I'll look at another way of sending data between the teensy and the displays. But the power makes sense to me to be more 'localised' to each display unit.

I'd appreciate some more eyes on what I have planned re: wiring and power, and there are a few things I'm wondering/assuming that would be good to get some thoughts on to put my mind at rest!

• Power supply limit - If I'm working to the suggested max current (60mA per LED), then each of the 8 displays will draw up to 10.8A at full brightness. I'd really like to use 10A power supplies if possible. My feeling is that this will be fine if I limit brightness on the teensy/software end (I would never need them that bright), but equally I want to KNOW that the supplies are able to deliver all the current needed safely - in case there's a glitch when data is disconnected etc.

• Fuses - should I be adding fuses anywhere in the project, other than those on the power supply plugs? Could a 10A fuse on each strip (after the power supply) ease my concerns about the max current, or would I just be repeating what's already there?

• Power cable gauge - based on this chart I think I need at least 14AWG wire for power on each display as it won't be carrying more than 10A, and over short distances. Would love a sanity check on that!

• Chaining strips - do I need to chain the grounds like I'm chaining the DIN/DO between strips? My understanding is that it would be redundant as the grounds don't care which end they're connected from. 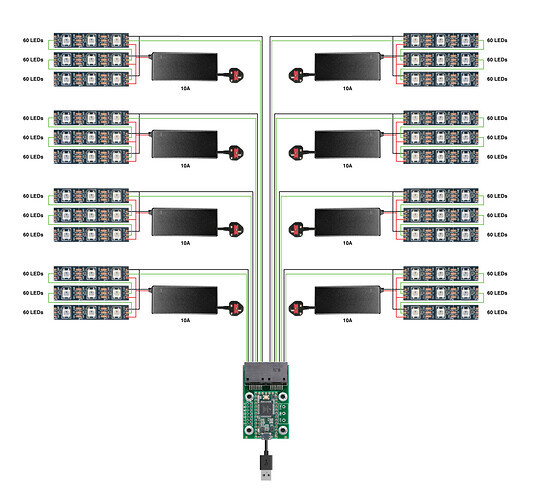 Grounds: yes, you must have common ground. The strips won't be able to receive the data if they don't have a common ground with the teensy/octows2811/previous strip. You are right to say there is no "direction" to the ground conductors in the strips, unlike the data line which is actually a separate line between the controller and the first led, and between each pair of leds along the strip.

Fuses: sounds like a sensible idea to me. 10A @ 5V is equivalent to ~0.2A @ 240V. The lowest fuse you can put in the plugs is 3A, which far higher, so won't prevent the cables from being overloaded of there was a short or some other fault. Are you sure the PSUs don't already have a fuse or polyfuse of some kind? E.g. a quick-blow 250mA on the input?

Wire guage: I agree with your interpretation. Maybe go for 12AWG for extra safety? My only doubt is does that chart assume a "loop" of wire, like UK domestic mains circuits are looped back to the consumer panel?

So I'm still a bit stuck on the common ground. Presumably all of the data outputs from the Octo/Teensy share a common ground anyway (right?) - I'm taking both data and ground to each of the strips from the Octo. And then each of the 3 strips per display share one as I'm connecting the grounds for power already. Would you add any other ground connections beyond what's in the diagram? I tested a smaller setup with the same principle (separate power supplies), and I couldn't see any problems with the display.

Fuses - this makes sense. I think regardless of what fuses the power supplies claim to have internally, I'll probably put a single 10A fuse on each display, between the power supply and the junction to each of the strips. I want my 'worst case scenario' to be a fuse blowing, and one that is easily replaced.

Power supplies - "you don't really want to go beyond 80% of the PSU's capacity in normal use." - I'm pretty confident that normal use would be quite a lot less than 80% of 10A. And I'll confirm this with a multimeter. It's the upper limits that concern me. The reason I'm keen to work within 10A is that this seems about the limit of a consumer/laptop-style supply that is nicely enclosed and insulated etc. Beyond that I'll be getting into the bulky silver PSUs that will need some sort of custom enclosure to keep them safe and tidy. So I'm looking at ways (in both software and wiring) that will ensure the current won't exceed 10A on each. If I can't do this reliably, I'll have to reduce the number of LEDs per display, which I'd rather not do if I can help it.

You have plenty of ground lines in your diagram. In fact, all the data lines could share a single ground line back to the octows2811 and it can be thin wire (its just data, the current involved is tiny) as long as all the grounds of all 8 power supplies and the controller are joined somewhere.

I think, in the fastLED library, there is a setting to limit the (estimated) current the pattern will use. I don't know if the equivalent function exists in the AdaFruit library, or whatever is used with the octows2811. Your Fuses should give protection against catastrophic failures. Its more the long term stress on the PSUs and strips I was worried about, reducing the life of either/both.

misterblix:
Chaining strips[/b] - do I need to chain the grounds like I'm chaining the DIN/DO between strips? My understanding is that it would be redundant as the grounds don't care which end they're connected from.

Actually, for a 60 LED strip, they care a lot about which end is connected.

So where the data out wire loops back to the input of the next strip, the ground wire should also loop back. But this presents a problem, or rather illustrates a problem. Running those 3.6 Amps down a relatively flimsy foil track will lose some voltage - this may be apparent as colour change down the strip - white at the source end will tend to warp to orange at the free end where the ground terminal has a non-zero voltage on it. And you can see how this could interfere with the data, especially when you consider relatively high frequency signals along an inductive path.

Wherever possible with these strips, you should apply not just the ground, but both power lines to both ends if the strip - with suitably heavy wire. And the data looping back will also run back along the power wires to the "out" end while those power wires will connect directly to the "in" end of the following strip in addition to however the power is fed to it.