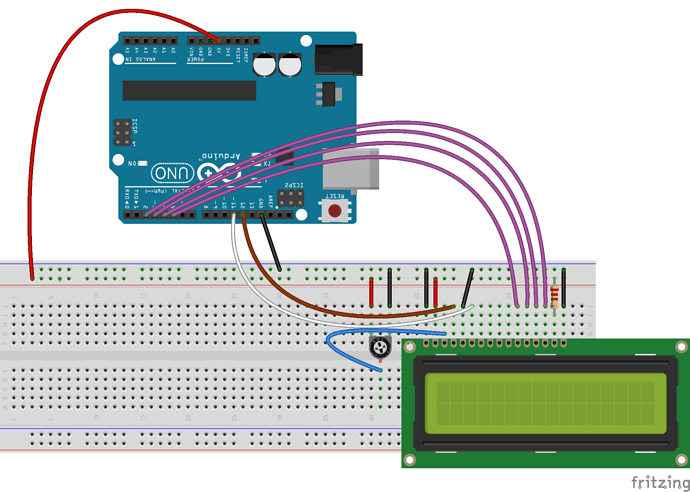 And how come this LED+ has a resistor and not the 5v entry?

It's probably the backlight. Look at a real schematic to find out.

The LED back light needs a resistor or some other device to limit the current. The LCD is designed to work off 5V and so does not need a resistor.

The back light LED circuit is kept seprate so you can wire it up to avoid problems.

A neat trick you can do with the backlight is to run the negative side of it through an NPN transistor and use that as a low side switch from a pin on Arduino to the transistor's base to programmatically turn the backlight on and off, say on when the user starts doing key input and off maybe 10 seconds after they stop. You can even PWM it for variable brightness. 150 ohm resistors work well for me.

If the LCD panel includes a resistor labelled "R8" or possibly "R9" with the value "101" (100 ohms - and the alternate one will be "0") as most of them do, then you do not need another resistor - just connect pins 15 and 16 to 5V and ground or pin 16 to a NPN control transistor (whose base is connected through a 1k to an Arduino pin).

Wow! Thanks guys. Albeit those last few replies were a bit over my head. Ill check them out once I get this Hello World off the ground.

Right now im trying to wire up the example and I dont have a 10kOhm resistor as required by the tutorial here:

Find out how to wire an LCD to an Arduino, and how to use the LiquidCrystal library through a set of useful examples.

So Im wondering if I can leave the LED off? Just not plug anything into those last 2 pins.

Marciokoko:
Right now im trying to wire up the example and I dont have a 10kOhm resistor as required by the tutorial here:

So Im wondering if I can leave the LED off? Just not plug anything into those last 2 pins.

You have three different things on LCD:

If you do not have 10K pot to control contrast, try to make a voltage divider to get 3V or similar it is not quite easy to set the right voltage without pot.

There is no 10kOhm resistor in that tutorial. There is a 10kOhm "potentiometer". That is for contrast control on the LCD. You WILL need contrast control. You don't need a potentiometer, however. Any voltage divider that will give you about one volt on the VO pin will do.

Your LCD probably does not need a backlight to view your Hello World, so don't connect pins 15 and 16 if you don't want the light.

Yes and No. Im sorry, im a confused and the tutorial is confusing? to me?

There is mention of a 10K resistor in the Code section with * as comments. It might be that they just meant the 10k Potentiometer in the Hardware Required.

However they do have a resistor, which looks kinda small. I think its indeed a 220 Ohms resistor according to the color bands

Marciokoko:
So I can leave the last 2 pins out, but I need the pot! OK. Great. Ill give it a try.

I would not advise that and you don't need a potentiometer!

Check the board for R8 and/ or R9 as I pointed out. If it is present as 100 ohms or similar, you need no other resistor to control the LED current unless you feel it is too bright in a dark location.

For displays with a LED illumination - which is most from eBay and the project suppliers - you will find them very difficult to see without the LED. Just connect Pin 16 to ground and pin 15 to 5V. In fact, the very first step in using one of these LCD modules, is to connect Pin 16 to ground and pin 15 to 5V to make the LED illuminate, then pin 1 to ground, pin 2 to 5V and pin 3 to ground via one of the aforementioned resistors to set the contrast. Only after getting this working and seeing the row of "blocks" on the first line, do you progress to the other connections.

Yes, I can see why that is confusing. And Paul__B and myself may be confusing you as well, and I apologize.

The "10k resistor" mentioned in the code is a resistor in the simplest definition, but it is a potentiometer, which is like a variable resistor divider.

I have here an LCD from SparkFun, which has a resistor already mounted for the LED backlight. Without any power for the backlight, I can see the blocks mentioned by Paul. They are not so easy to see, but still capable of a "Hello World" test. With light, they are easier to see...

But I also have here an LCD I ordered from Mouser that does NOT have the resistor already mounted. So I use a 150 ohm resistor in my circuit.

OK yes it has both an R8 and an R9 at the bottom side which seem to be going thru the last few pins. So I'm good without a resistor.

I got it working as far as power is concerned, but no data printed. I posted here:

You should have bought the LCD shield.
No wiring or soldering, 6 control buttons, PWM backlight resistor and mosfet, 10k contrast pot. All on the shield.
Leo..

Wawa:
You should have bought the LCD shield.
No wiring or soldering, 6 control buttons, PWM backlight resistor and mosfet, 10k contrast pot. All on the shield.
Leo..

I agree with making your own stuff, but if soldering is still a problem (see cross post), and you haven't got a proper temp controlled soldering station, you should not start with the small pads of an LCD.
Leo..

Are we talking about the .1" pads on a regular 2x16 or 4x20 LCD with holes through them? They're HUGE! Plus, once you shove headers in there and flux the pads, they are solder magnets. Probably one of the best starter targets for soldering out there. Then try a 0.4mm QFP-144. 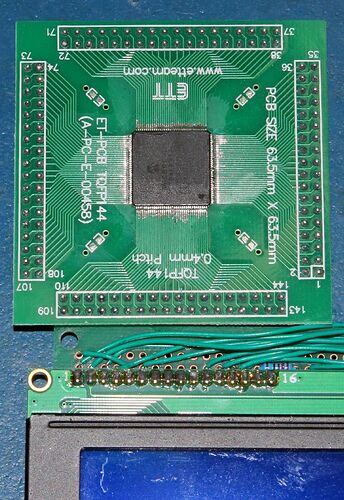 I started soldering about 55 years ago. And worked as a consumer electronics tech.
And I do production runs with .65mm pitch SMD chips, so I should know a bit about soldering by now.

Just saying that for a beginner it's wise to start with pre-tinning wires and soldering some resistors and LEDs before moving on to a circuit board.
Leo..