I wanted a bit of advice on what type of lighting to use in each square of the matrix. It would be divided into 25 sections each measuring 200mm x 200mm. What sort of light/led should I be looking at on the market thats pretty much plug and play to get a good range of colours? Something thats not going to involve hours of soldering is what I am after.

You could get some of those LED pixel strands from Adafruit. They're pretty cheap...even the square 4 LED one. However, they're also spaced much closer than 200mm...more like 80mm. So you would definitely be doing a lot of cutting, adding wires, splicing and soldering. Save lots of money, though.

If you solder things together yourself, you can make a 5x15 matrix and control it pretty easily with an Arduino and some extra electronics. Or, you can use a bunch of 74HC595 chips and the ShiftPWM library. That's definitely cheapest, but you'll be soldering every single part.

Alternately, you could buy the stuff I make. It's not produced in large scale, so it's not as cheap as the other options. However, the modules are all separate, and we have pluggable cables in various lengths.

The first type is the ShiftBrite. That's one LED per module. So unless it's pretty dark in the room, it might not light up a 200mm x 200mm square area very well. Someone made a 4x4 panel, but it's a really dark room and it's hard to determine the scale: 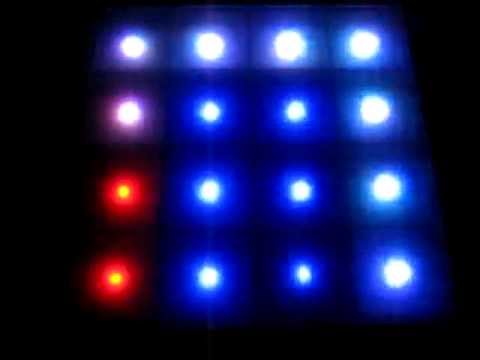 Next is the MegaBrite. It's about 5x brighter than the ShiftBrite, uses the same communication method and cables. However it's a little harder to mount.
Link to the MegaBrite: Macetech

A different approach is the OctoBrite DEFILIPPI and some Satellite 004's. This is a star diagram method instead of a chain. And each module has 8 RGB channels, so you'd end up with 7 channels left over for a 5x5 array.

For ultimate brightness, you could use the OctoBar and Satellite S-001's. This is easiest to wire up, since you just use phone cables to the light modules. You could also use three Octobars plus one ShiftBar so that you don't waste extra channels. It'll probably be way too bright for a 200x200 square, though, and way more expensive.
Link to OctoBar: LED Components – Macetech