Hello,
Just wondering if I could use two LM7805's in parallel to double the output current or would it be better to split the outputs to separate loads.

There are linear regulators that can handle more current, just use one of those instead. Or if you can split the load, why not? What would be the advantage in paralleling them in that case?

Second question: P=EI. More detail in the 7805 datasheet that you should be reading now.

Both. Heat is related to power and power is calculated as Watts = Volts x Amps. (And in this case, it's the current through the regulator and voltage dropped across it.)

That's not the case with switching regulators because the voltage across the active component and the current don't happen at the same time. (Energy is stored in an inductor rather than being wasted.)

No. Each regulator will attempt to keep the voltage output to its preset value.
So lets consider two LM7805 regulators. There are normal variations between individual regulators.
For this discussion lets assume one output is 5.05V and the other is 4.95V.

The above explanation takes some liberties it the details of what will happens but I hope the concept is understandable.

Power is a result of both current and voltage. Both must be present to create power.
For a regulator the power will be:

Thank you for the replies! They were all very helpful. To answer aarg's questions, I have extra 7805's laying around and extra holes in my 5v and gnd rails of my protoshield

vulture2600:
Hello,
Just wondering if I could use two LM7805's in parallel to double the output current or would it be better to split the outputs to separate loads.

No, never try directly paralleling voltage sources, you can destroy everything powered from them if it
goes into oscillation, and they will not current share evenly even anyway - get a proper power source for
the load.

The only exception is where you have identical battery cells, or power supplies specifically designed
for paralleling, and read the manual if you have such...

Temp, not current, could be the first limiting factor for a TO-220 analogue regulator just plugged into a proto shield without heatsink. 78xx regulators need at least 2volt headroom, and they have a current limit of ~1Amp.
So at max current they dissipate at least 2watt (more if input voltage is >7volt). Enough for a temp rise of ~130C above ambient.
Leo..

better to split the outputs to separate loads.
I have extra 7805's laying around

Hmm. Fairchild says about LM78XX: "Each type employs internal current limiting, thermal shut down and safe operating area protection, making it essentially indestructible." I think it is not so bad to use more than one in parallel. Sure, in worst case one will source all the current until it gets into limitation. Then voltage will drop until it reaches the treshold of the second regulator which will start to supply current and help the first one and they will keep voltage on the lower level.
Why do you think it will start oscillate more likely than a single regulator? Do you think the oscillation may be higher than the desired output voltage?

Trust me, I've seen it happen, paralleling voltage regulators can lead to oscillation and complete board
destruction. Why risk that?

Thermal and over-current shutdown cannot protect against it, its an over-voltage problem. And yes the
regulator isn't destroyed, just the rest of your circuit.

A single regulator is stable (with the right capacitors and a 'passive' load). With two you have to do the
network analysis using S-parameters or something to convince yourself a particular setup is stable
rather than a high power oscillator circuit - two high gain amplifiers fighting each other basically.

I'm thinking that two voltage sources, not producing 'identical' (theoretically) voltages will lead to interesting dynamics going on with the currents (and the voltages) when supplying a load. At least the supplied voltage might be noisier than having just one regulator by itself.

If some extra work is added, like current sensing and compensating one (or the other) regulator based on voltage and/or current monitoring, then could end up with a nicely behaved system.

But probably no need to bother because everybody here explained ----- might as well use a single regulator that can handle the power.

vulture2600:
Hello,
Just wondering if I could use two LM7805's in parallel to double the output current or would it be better to split the outputs to separate loads.

To get more output current, you can do one of 3 things:

(1) Use a different linear regulator (there are 3 amp and 5 amp and maybe higher versions of the classic 3 terminal regulator).
(2) Use a switching regulator.
(3) Use an external pass transistor to carry most of the load, like this: 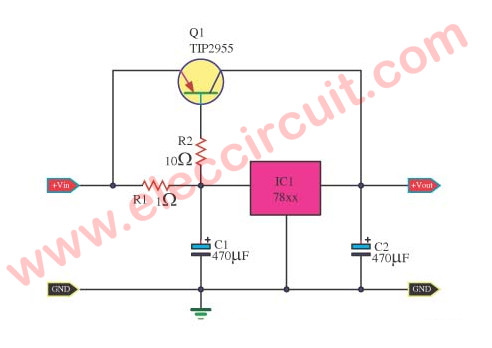 Note that you can get EXCELLENT remote sensing (if you need it) by tying the regulator output and the MJ2955 collector together at the LOAD end, as well as tying the 7805 ground lead to the ground rail at the LOAD end.