MFRC522 With External Antenna Not Working

Hello! I'm trying to create a custom UHF RFID reader with the goal of extending its range. I modified the MFCR522 chip in order to destroy the old antenna and connect a separate 5dBi UHF RFID Antenna capable of 902-928M with an SMA connector. Which J# should I connect the leads from the old antenna to? Currently it's connected to J6 but it does not work. I uploaded the MFCR522 RFID Arduino Library by miguelbalboa and ran the "DumpInfo" example sketch but it cannot detect any cards. What am I doing wrong? I have my hardware setup attached below. 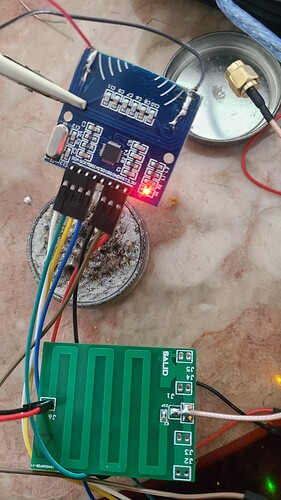 Does your backup board still work?
Paul

Yes, it should. Unless you're referring to the internal antenna of the RC522 that I dremmeled off, in which case no. I do however have a spare RC522 chip.

Yes, the antenna. Next time, just cut the trace going to the antenna, so you can solder bridge over the cut to restore the original antenna.
Paul 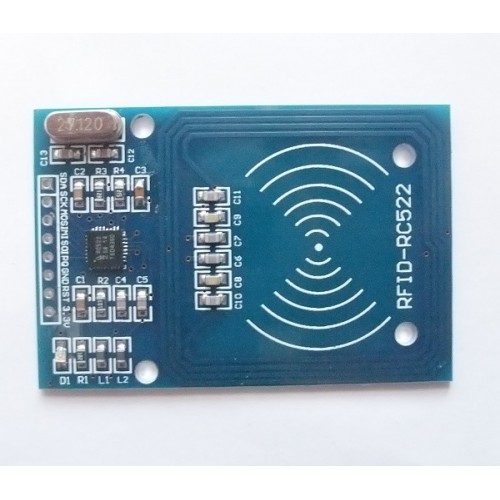 That bank of capacitors C6,C7,C8,C9,C10, C11 is used to form a resonant circuit with the 4 turn coil that you have irreversibly removed. It was tuned to the operating frequency.

I think that the antenna that you have fitted is totally wrong for the frequency of operation.

Good catch! And at that frequency, the RFID is sensed by direct induction.
Paul

How would one calculate the capacitance needed for this type of antenna? Also, I looked at some other designs and came up with a theory I hope you could confirm or deny. Would the antenna hook up to a separate UHF reader via the SMA port (that I have yet to obtain), and the J1-6 ports are for supplying added power to boost the antenna. Is this correct, or do I have it backwards and it's more like I have it currently?

Forget the antenna idea. It is a tuned coil, tuned to the 13.56MHz frequency. Two adjacent coils tuned to the same frequency will share the same power. IT is a transformer, not a transmitter and receiver.
Paul