I use piezo-disks as pressure sensors (i don't use MIDI-software, the sound has to be created in the Arduino itself, or in a shield. MIDI Output would be cool, but is not required): 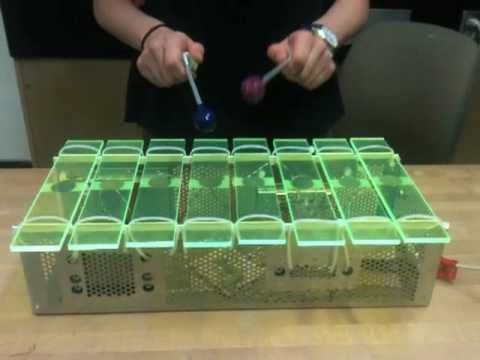 The main problem is the long reverberation (up to 5sec) of the played notes. Means: If i hit the keys to fast, the arduino must mix the sounds with the other Keys.
As i know, all the available WAV- or MP3-shields can not mix sounds. So i was wondering, if there is a way to create the sound with the build in soundgenerator of the Arduino. Is it possible (and programmable) to mix the different frequecies of each played key (with reverberation or fade out) and play theme?

Or is it possible to use 8 WAV- or PM3-Shields with a Arduino and then mix the output?

Any help is welcome

the build in soundgenerator of the Arduino

It doesn't have one.

the sound has to be created in the Arduino itself,

Is this an assignment you have been given?

It doesn't have one.

Is this an assignment you have been given?

No. What i meant was: The sound must (if somehow possible) be created without a external synthesizer. It is an artprojekt for a festival in the desert. And i think a laptop would not survive the extreme conditions.
My target ist to put al the needet parts (Arduino, shield(s), sensors, batteries and the amplifier) in just one case and seal it.

Burning Man? There were many Arduinos there last year...

Instead i could use a GinSing-Shiled

Yes there are a number of external synths you could use.
If you want you can add EEPROM, D/A and SDRAM and have the arduino synthisise it's own sounds like I did in this project:-