Hey so i have (pretty sure i have) a circuit set up as the one shown below. It sort of seems to work but for some reason the dc motor never fully turns off when there is no signal being sent to the mosfet. Basically when there is no signal the DC motor runs at a sort of half speed and when a signal is sent to it the motor runs properly at full speed. Can someone help me out as to why this is happening??? Ive tried wiring circuits excluding the arduino board and just plugging and un-plugging the gate wire but the same thing happens (i.e. it always seems to be getting some current and voltage). Note that i am using a 9V battery and N drive mosfet from freetronics. 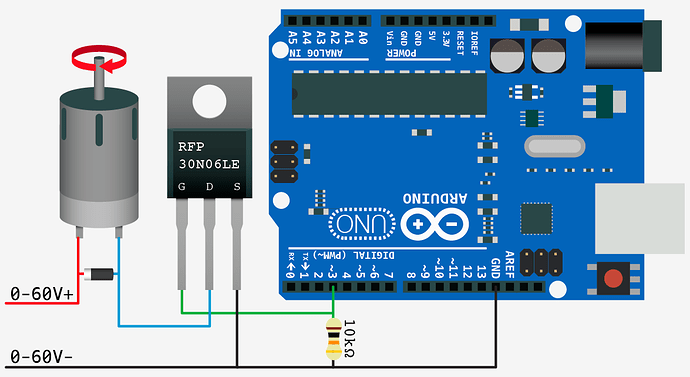 Assuming no component damage or mis-wiring, I see no problem with the design. I see you are driving it with a pwm pin, so perhaps we have to see your complete sketch to look for a possible problem.

Have you tried unplugging the green wire on pin 3 and attaching it to a ground? That should test out the mosfet circuit for ability to turn the motor completely off.

This is my sketch

Try pin 4, but use a 1k resistor, i got a feeling you may have a bad pin?... measure that pin with a multimeter, see what voltage you're reading between states.

So i wired it up like the diagram below and used a p type transistor and it works with an LED rather than a DC motor, but not with the DC motor. ??

That is not the way to use a PNP transistor.
You must connect the emitter to + collector to motor and other side of the motor to ground.
Without any capacitors your motor is likely to reset your arduino every time you try and turn it on.

So i should be using an N type transistor instead? I tried it with one but it wasnt working properly. With the N type it does what the code says but rather than turning off the LED just fades a little bit (i.e bright to half-bright and so on). If i remove the G pin theoretically nothing should happen but instead it does what the code says but goes from half-bright to off and so on

Yes you should use a NPN transistor in this circuit.

Never leave a pin of a transistor unconnected.
Make sure you have identified the three pins of the transistor correctly it sounds like you have not.

Ok thanks. Would you be able to explain why when there is no signal being sent that the LED (replaced the motor at this point) still has a slight glow?

And why when i wire in a DC motor (as opposed to the LED) nothing happens?

And just for clarification, the N drive transistor is wired in according to the latest diagram so that the G pin is furtherest down the board (row 10) and then D above it and S above that

I think you are missidintifying the pins. What transistor are you using?
Note that it is often to suffer that indicates a diffrent pinout for a transistor.

I am using the N drive from freetronics

Same as this one

Your main problem is you keep using the wrong words. While a MOSFET is a transistor, if you just use the word transistor it means a junction transistor.

With that the dimm glowing of the LED can be due to leakage. When you say the motor will not work it could be due to lack of power from your supply. You need to get a multimeter and measure voltages to see what is going wrong.

With that module you don't need (should not use) any other external resistors. 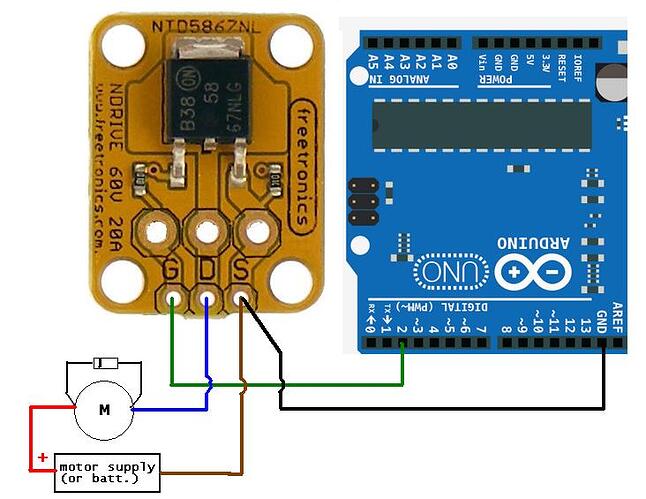