First time posting here! I have been using the MKR boards to learn the Arduino basics and architecture (still so much to learn!).

I am starting a project that has several sub-projects to it. I think I have a decent enough grasp on the sensors I am going to use, but was looking for some feedback on a schematic I drew up for powering the project. I am used to using the USB B to power projects, but due to the remote mounting of the project, I am looking to use the Vin pins to power the Arduino. Additionally, I am looking at adding a light between the Buck Converter and Arduino to show outside the housing that I am indeed receiving power to the unit. Then, since the main system will be powered by an outside 12V source (batteries connected externally) I was looking at using a DPST selector switch to keep the unit off until power was connected so that any connection power spikes don't cause issues in the system. Long story short, I was looking for feedback on the following:

Thank you for any help your able to provide! 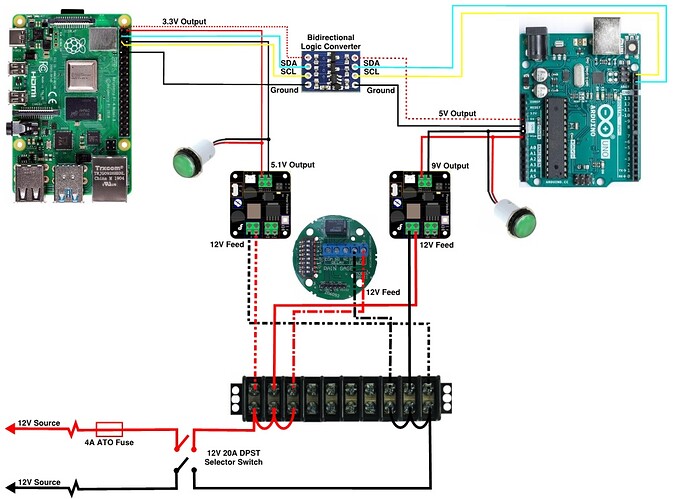 I didn't check the pinouts but I don't see any problems.

Since your power source will be a battery, why not use a single 5V buck converter?

LEDs- indicators like this usually have the current-limiting resistor inside. But, put a 220Ω resistor in series just to test.

The fuse will do nothing to protect the boards. What a lot of people fail to realize is that fuses and circuit breakers protect whatever is upstream from the fuse/breaker. If you get an anomaly on the 12V line, the boards would be fried before the fuse could react. But the buck converter would protect the boards.

What id the Raspberry doing?

Thank you for the feedback!

I was looking at two buck converters since from the literature it looks like the Uno Vin prefers around 7-9V for steady operation, and the Pi 4 wants 5.1V per it's literature.

For the LED's that makes sense, I have a few of those resistors laying around so that will be easy enough to test. Mainly am interested in seeing power was getting from the buck converters from outside the housing.

That was one of the things I was thinking of as well for the fuse, it would blow, but the damage would be done already.

This is my first time using a Pi and Arduino together, but basically the Pi 4 is set up as a master device and the Uno is slaved to it. However the data from the Pi (NOAA sat imagery downloaded via an antenna and SDR) will hopefully be transferred to the Uno which will then be combined with the Uno's weather data and sent to a server.

grog0044:
I was looking at two buck converters since from the literature it looks like the UNO Vin prefers around 7-9V for steady operation,

If you have a buck converter, you set it to 5 V and connect it to the "5V" pin. You see, the actual microcontroller operates on 5 V, so that is the voltage you actually want to supply!

That would make sense! Didn't even think of that.

grog0044:
That would make sense! Didn't even think of that.

Don't blame yourself for this. Do blame the Arduino manual pages which indeed teach you to use the Vin rather than the 5V directly - while the latter is so much easier with all those 5V power supplies in people's drawers (they're commonly known as "mobile phone charger"). Last time I checked it wasn't even mentioned that the 5V pin can be used to power the thing!

It is indeed a very real danger is that the obsolete tutorials on the Arduino site and others misleadingly imply that the largely ornamental "barrel jack" and "Vin" connections to the on-board regulator allow a usable source of 5 V power. This is absolutely not the case. It is essentially only for demonstration use of the bare board back in the very beginning of the Arduino project when "9V" transformer-rectifier-capacitor power packs were common and this was a practical way to power a lone Arduino board for initial demonstration purposes. And even then it was limited because an unloaded 9 V transformer-rectifier-capacitor supply would generally provide over 12 V which the regulator could barely handle.

If you are asking this question, it is highly likely that you will wish to connect something else. In which case, the answer is regulated 5 V.

This is because the on-board regulator is essentially capable of powering only the microcontroller itself and no more than a couple of indicator LEDs. The on-board regulator might be able to power a few other things if it had a heatsink, but on the Arduinos, it does not.

It is not just the tutorials. It's worse: the product pages of the Uno Rev 3 and the Micro even RECOMMEND 7-12V in the "technical specifications" tab, without mentioning the option of powering over the USB socket or the 5V pin. Even the USB option can handle way more current (~500 mA) than the regulator with a 7V input (~350 mA)...

wvmarle:
It is not just the tutorials. It's worse: