Is there a way to determine how to properly control an addressable LED strip without knowing the precise type or chips involved?

I received a strip of LEDs from a seller on Amazon (https://www.amazon.co.uk/gp/product/B00WONJUZM/) but received a strip with 4 pads not 3. After getting no response from the seller i got a refund from Amazon but didn't have to return the strip.

Not wanting to waste the LED strip I tried controlling them as if they were a strip of LPD8806 (which have 4 connections) using both a Raspberry Pi Zero (LED strip and RGB LED software | Raspberry Pi LED Spectrum Analyzer | Adafruit Learning System) using SPI and Arduino Nano (Wiring | LPD8806 Digital RGB LED Strip | Adafruit Learning System) using both SPI and bitbang methods.

However the test methods included in these packages did not result in the desired test patterns.
The strip is definitely an RGB strip as I've sent a random series of bytes to the strip and it will light up with each LED a random colour. Strangely even the blanking routines don't work and most often the only way to turn off the LEDs is to kill the power to the strip.

I've attached a picture of a segment of the strip below.

Looks like it to me. Here is a photo of one I took the other day. 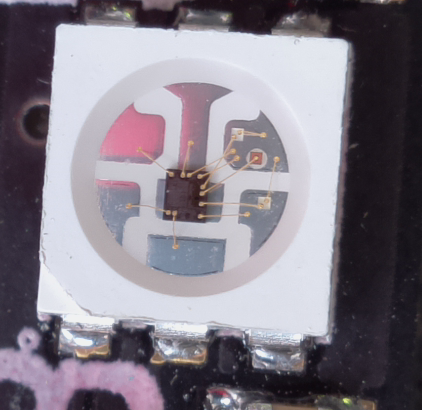 I've tried the APA102 library from the post and unfortunately it didn't give the right test patterns.

I've also compared the close up with a close up of the strip I have and there are slight differences in the layout.

I've tried messing round with the sequence of bits used to start and end the data strem with not much luck. I guess I might have to do a more methodical search of start and end indicators. 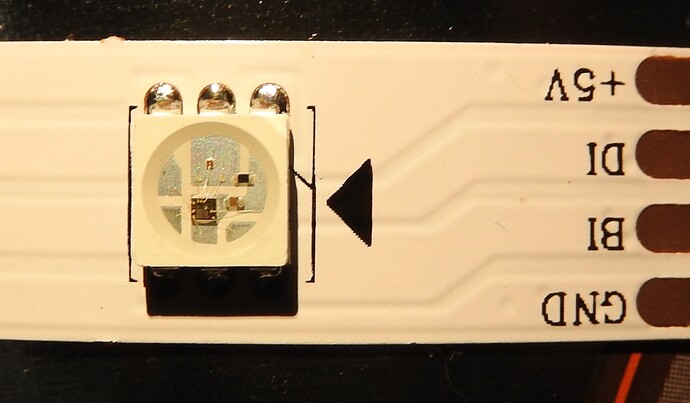 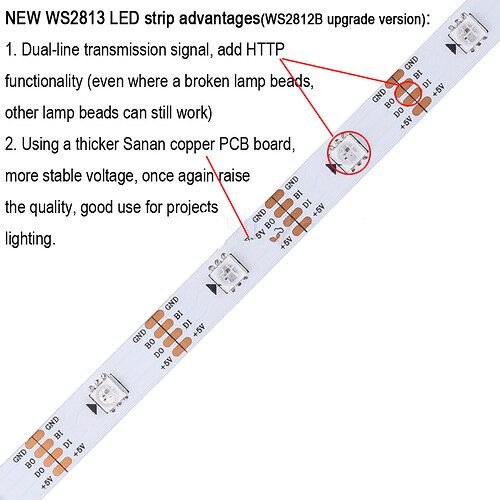 It appears that the fastled library might support this strip.