Im trying to use the library with a PS/2 barcode scanner that gives its output just like a keyboard would.(http://www.karlssonrobotics.com/cart/Barcode-Reader-Scanner-Module-CCD-Camera-PS-2-Interface/) link to it. I tested the scanner on a pc and it works perfectly. When i use it on the arduino it seems to work but the arduino is either not getting an output or is not processing it properly. Any Ideas?

When i use it on the arduino

What is this phrase supposed to mean?

can you post the code used?
how did you connect the scanner?

I connected it to the arduino Uno using the guidelines that come with the PS/2 KEYBOARD LIBRARY, i also used the attached picture as a guide and added pullup resistors I also tried the code that came with it Arduino Playground - BarcodeScanner. The code is from the "simple test" example that comes with the library i only changed the data and clock pins. 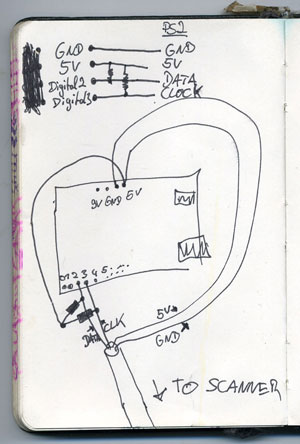 The scanner also has a RS232 mode, i set it to that and tried it with the serial event example for arduino. I connected the data pin to the arduino Rx pin.

Could be large voltage swings on RS232 (even negative voltage). I think you would need an RS-232 to TTL232 converter so all signals are at 0-5V.

sorry meant to say rs232 mode, the device is a 5v device so didn't think of that thanks.
Just trying to get the data from it by any means

Still not solved, tried with another code and still nothing. It seems to work for others so if anyone knows anything not explained in the library i need to do please help me.

I'm trying to do the same but in my case is a keyboard, i don't know what's happening in a moment the keyboard works fine then not.

I too am having trouble getting a reader (MCR12) to talk to an Arduino Uno. I've made my own four wire cable and have wired it up like this:

Here's the scanner pin chart from the manual:

I've tried multiple different variations of the PS2Keyboard sketch and don't get any data from the scanner when I open serial monitor. All I see are "keyboard test" or similar. The scanner has power and scans fine, but nothing is being received by the AX.

I've also tried swapping round the data and clock wires going into the AX, as well as inserting pull up resistors. I've also tried different pins depending on the sketch (usually 5 & 8 or 2 & 3).

Does anyone have any idea why this isn't working?

Hi.
For the MCR12 Clock pin you must use Arduino Uno R3 pins 2 or 3 (that are INT0 and INT1 pins), no others.
Use the PS2Keyboard library 2.4 PS2Keyboard Library, Connect a keyboard for user input
Try this sketch:

I'm having the same problem with an MCR12 PS/2 version talking to an Arduino Uno. My cabling is as suggested above.

I'm using version 2.4 of the PS/2 keyboard library, with the sample sketch modified with IRQpin 3 and the DataPin from 4.

Apart from the IRQ pin placement, my setup is identical to the photo above.

I'm only getting "Keyboard Test:" as output, and keyboard.available() never returns true.

I've tried the scanner defaults, and other 9600/Keyboard/all codes combos. 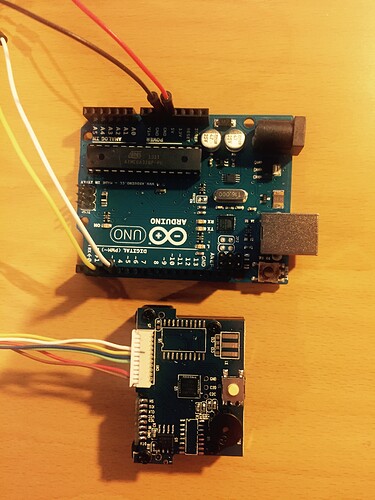 [EDIT] I just read at http://www.jkmicro.com/ps2keyboard_en.pdf which suggests CLK and DATA need pull up resistors?

"DATA and CLOCK signals are “open
collector” type: they need to be “pulled-up” to
5VDC via 10kOhm resistors. Remember that
a logical “0” generates a 5V signal, while a
logical “1” is observed as 0V !"

It seemed like people had this working without them from the posts above?

Is it working now?

Im having the same problem now, but I had connected it to the 5,6 on the module. I watched the adafruit video of the module and thought that i saw it connected to 5 and 6.

Changed to 7,8 now, but its still not working.

Hello everyone, i want to ask something about a barcode.
I am working my final year project on a library management system which need to include a barcode reader design, now what i want to ask is, i really want to find a barcode reader/scanner module which has a ttl output (binary output) then i will get the ASCII using using arduino then send to my C# code on my Pc (it isn't a problem i will do it easly).
(i.e i don't need a barcode reader with final output!!!)

I have arduino uno and mega micro controller.

Anyone who have an idea let me know where or how i can get such kind of module please.
10x in advance and thank you for your time.