I want to read my old TI 59 magnetic cards with an Arduino. To start, I extracted the 4-track tape head from the broken calculator.

This is from the old maintenance manual: "When reading, the output of the magnetic head (each track) is a series of pulses with alternating polarity approximately three to four millivolts peak. ... Capacitors C2 through C5 decouple common mode voltage caused by the DC bias supplied to the magnetic heads."

The diagram shows two different negative voltages being used, and supports reading and writing to the card.

Since I only want to read, and because I have an Arduino to perform the analysis of the pulses, I hope there is a simpler way to wire everything up.

All I need to get from the circuitry is a 0-5V voltage that I can read and analyze on the Arduino.

I do have an LM324-N OpAmp, which is actually the same one that the Calculator itself used to amplify the signal.

However, I don't have the slightest idea on how to wire everything up. In the original diagram, for example, the head is connected to -3.6V. I was hoping to have a much simpler way of reading: Instead of -3.6V, connect one side of the head to ground, and the other side to the OpAmp input. Then I would amplify the minuscule voltage that is generated by induction via the OpAmp to a readable signal.

Also, I don't know if I have to use capacitors, and why.

Would anyone know how to wire such an apparatus? 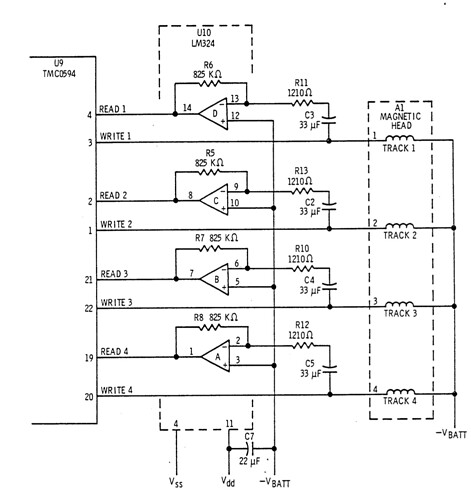 Wire a 1K resistor to the +5 and another to the ground. Join the two free ends of the resistors together and connect this to the -Vbatt in that circuit.
Connect Vss to 5V and the Vdd to ground.

U9 then becomes the Arduino. Only wire up the read lines to input pins do not connect the write lines to anything. Then there is no problem erasing anything.

Also, I don't know if I have to use capacitors,

C7 to lower the supply impedance to reduce noise.
C2 to C5 to act as an edge detector by making a differentiator circuit.

Not if you use that circuit

Thanks for your reply! Sorry for my late reaction, but somehow the forum failed to alert me about the new post in the thread.

Here are some specifications for the TMC0594 magnetic card reader chip. Note the supply voltage values (Vss = 0 and Vdd = -10 V).

Ah, thanks, now I think I understand. Initially I didn't read the first suggestion properly: The "write lines" are the ones from the diagram, not any (non existing) write lines of the coil. Understood: I'll leave those out.

Both sides of the coil are then on 2.5V, and I have no voltage difference between them.

I'll probably use different resistors for the OpAmp: I was thinking of using 1MOhm and 1KOhm to get a bigger amplification.

One (hopefully last) question: What exactly will I read on the OpAmp output, on:
a) +3mV Pulses
b) -3mV Pulses

In-between pulses I'll have 2.5V, if I understood correctly. So to get a bigger difference between pulse and non-pulse, I could use a lower VBatt, right?

You will have to experiment to figure out what works.
Increasing the gain may lead to oscillation with the LM324, and is not recommended.

You will read either high or low when there is no pulse and then the opposite when there is a pulse. Depending on the normal bias this will be with the negitave or positave pulse.

You do not have to measure the duration of the pulse only the time between pulses.

Thanks for all the answers! I have now ordered the parts. Hopefully in 2-3 weeks I can report success.