as recommended by larryd, I'm trying to implement a P-channel MOSFET high side switch in a circuit of mine to connect peripherals and sensors to Vcc, alongside with an N-channel low-side switch for a relay (so that I have used both configurations once).

While researching for the last three hours or so, I've come across various different resistor configurations of each switch type and I can't quite figure out which one to use and how to dimension the resitors.

First, there are configurations which use both a pull up/pull down resistor on the Gate and a resistor in series with the control I/O pin: 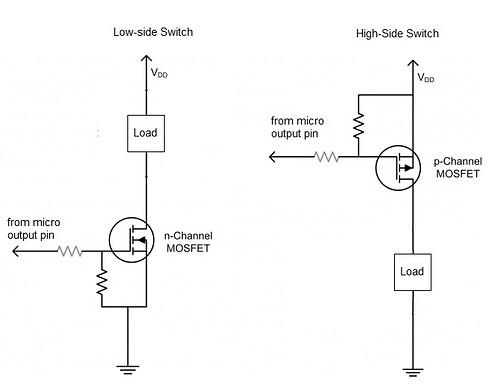 Then, there are configurations which use pull up/pull down resistors on the Gate, but no resistor in series with the pin: 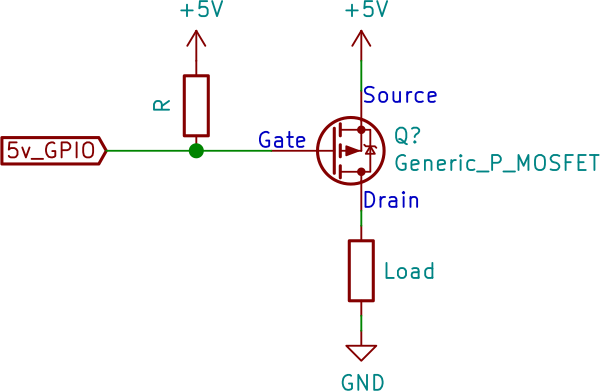 And finally, on the same website, a P-channel high side switch configuration is shown with a resistor in series with the I/O pin, but no pull up resistor: 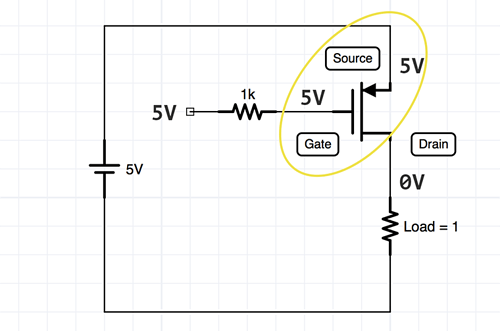 Now, I can't quite wrap my head around the fact that all three variants are suggested in multiple sources online.

To my understanding, the resistor in series with the control pin is required to prevent any short term high current flow from the MOSFET gate into the I/O due to capacitive properties of the MOSFET Gate.
Therefore, I would assume leaving it out puts the Arduino in danger. I found multiple sources that suggested using a 1k resitor in series with the pin, but no explanation for this value. Can anybody help me out here?

MOSFET gates are like capacitors and will pull short sharp spikes in current when being switched.

The resistor between gate and source is to turn the MOSFET off when the circuit is powered down,
when the microcontroller is reseting or starting up. Since a gate is a capacitor it could otherwise
be on when the circuit starts up (due to storing charge from last time).

series resistors will be a few hundred ohms or so, gate/source discharge resistors 10k to 100k or
so (large enough not to interfere normally).

Note that for high-side switching from a 5V microcontroller you need a level-shifting circuit unless the
voltage being switched is 5V.

If switching with 5V the MOSFET must be logic-level. 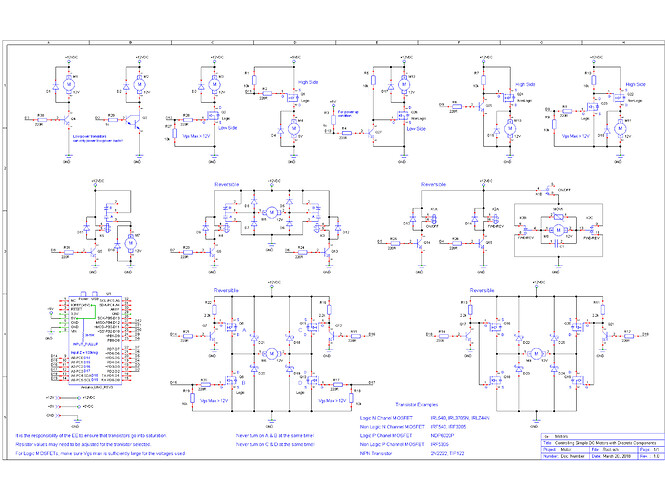 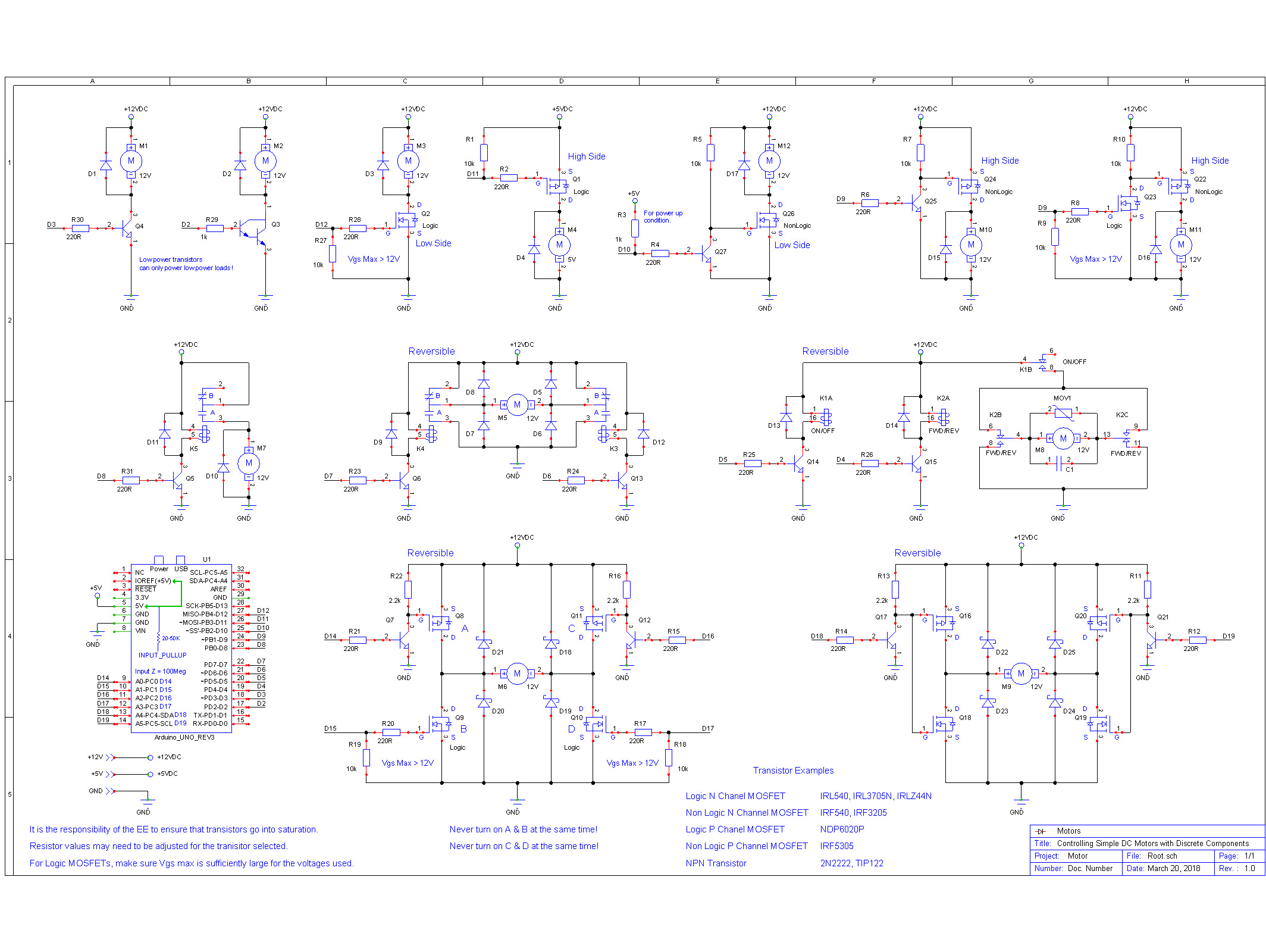 The first two diagrams above, 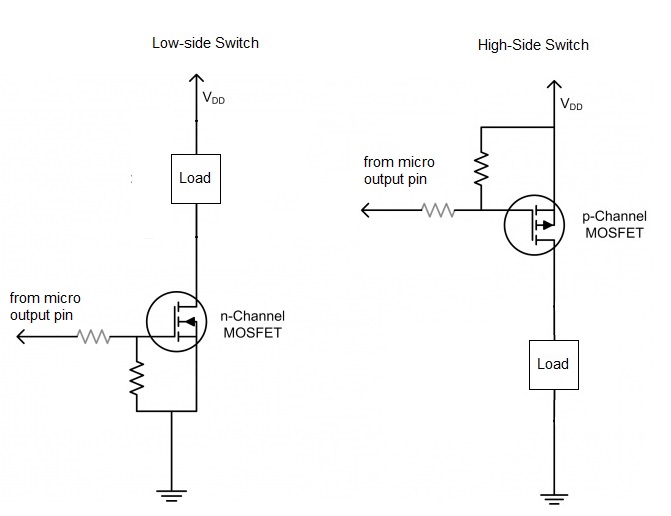 are wrong and misleading as the gate-source resistor is on the wrong side of the series resistor.

“ The "Reversible" example in the bottom right corner is very risky!”

You are going to “shoot through” that circuit

This is gold, thanks for sharing! By fat the best/most concise explanation of the topic I've seen so far.

This answers my questions, I appreciate the help everyone

Paul__B:
The first two diagrams above,

are wrong and misleading as the gate-source resistor is on the wrong side of the series resistor.

Yeah, I found out about that distinction while reseraching MOSFET switching

But thanks for the reminder.

Lets clear one thing up, the relative position of the series current limiting resistor and the gate-source turn-off
resistor doesn't actually matter at all.

The series resistor is a few hundred ohms, the gate-source resistor is 10k to 100k. The voltage difference
seen at the MOSFET gate through switching them over is insignificant as 5V * (10000 / 10220) = 4.9V, and
logic-level MOSFETs are rated for 4.5V or more gate drive.

If it worries you use 100k for the gate-source resistor, then its 4.99V against 5.00V, totally irrelevant.

MarkT:
Lets clear one thing up, the relative position of the series current limiting resistor and the gate-source turn-off
resistor doesn't actually matter at all.

If you scale the resistors that way, that is.

Not always done however.

So the discipline of understanding that the "gate-source turn-off resistor" is not there because of any problem with the FET but is there to hold the controlling microcontroller output until it is correctly initialised and therefore belongs on the microcontroller side, is worth following and avoids any concerns about scaling the resistors. They could even be equal!

(Not that there would be any obvious advantage, of course.)

So why am I fussy about this then? Well, I tend to pick up on problems caused when people - that is, engineers - do things without understanding what, or why, they are doing them. This is such an example.

Is there any good reason to put the turn off resistor on the gate side?

I can imagine a situation when you want the turn off resistor quite strong. If the load is heavy, MOSFET have large gate capacitance and the MCU suddenly resets a weak resistor will cause the MOSFET turn off slowly - possibly damaging it.

Smajdalf:
Is there any good reason to put the turn off resistor on the gate side?

No, because if you attempt to use a sufficiently low resistor value here which would help to turn off the FET, then it will cause the voltage divider problem.