Hello,
I'm trying to add a wireless push-to-talk microphone to a retail store stereo sound system, ideally, when the microphone is activated, it would broadcast on the store speakers and cut the other audio streams.

I'm thinking of using two ESP32 to transmit the sound and a simple ON/OFF signal over wifi on the current store network. I also need to find a way to have an electronically controlled stereo switch (controlled by the ON/OFF signal).

I know there are existing resources on how to use an ESP32 to transmit audio, so I'm going to look into this, but I'm certainly going back here to ask for help.
Some simple researches didn't find anything about an electronically controlled audio switch, if anyone has some clues, it could be of big help ^^

Thank you very much 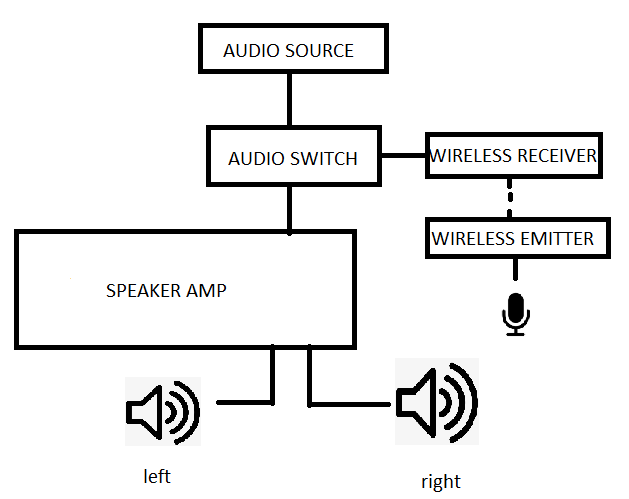 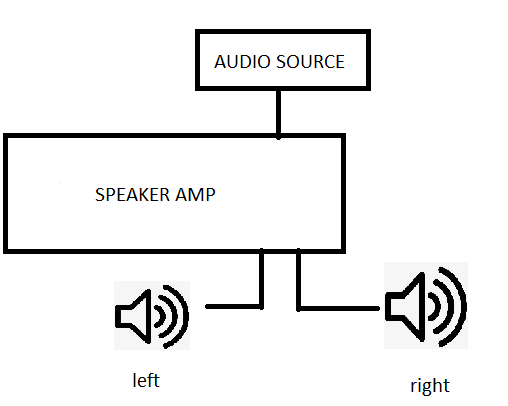 This sounds like commercial sound equipment. Tell us what each part is and include a link to its technical data. What microphone are you using. What distances are we talking about. Is the microphone wired or wireless, you were not clear on that. Modify your search term to "audio switcher commercial music" I got several million hits. You also need to know the system impedance. I would assume 600 Ohm which is relative common with XLR connectors. The high impedance generally uses the RCA type of connector. What you posted is not electronic schematics but block diagrams.

Just a quick note, you can mute the microphone by shorting the signal to ground or in commercial the differential pair.

I know there are existing resources on how to use an ESP32 to transmit audio, so I'm going to look into this, but I'm certainly going back here to ask for help.

OK... I have no idea if it's fast enough but with Wi-Fi there will probably be latency (delay). Bluetooth may not cover the distance you need. Most wireless PA systems are either analog or I think they use proprietary digital protocols.

Are you going to build something portable like a walkie-talkie? ...Personally, I wouldn't want to attempt that.

ideally, when the microphone is activated, it would broadcast on the store speakers and cut the other audio streams.

There are commercial amplifiers that have that. A million years ago I worked for a company that installed & maintained PA systems for grocery stores, etc. In those days everything was hard-wired and the microphones had a push-to-talk button and an extra-connection back to the amplifier to mute the music when the button was pushed. (I believe all of the mics were wired in parallel into one input.) This is called "priority" or "precedence". You can still find amplifiers with that feature.

Another method is called "ducking". That's where a 2nd sound/signal reduces or mutes the main sound/signal automatically (you don't need a button or relay). Again, there are commercial amplifiers with ducking built-in.

The priority/precedence method is better because the music is cut-off as soon as the button is pressed and before you start talking, whereas ducking doesn't kick-in until someone starts talking into the mic.