RS-422 protocol communication between Arduino and relay for 130 mt.

I need to operate a strobe (12V) with a relay 150 mt away from the mC and was thinking of using one 25LS31 driver on the arduino side and a 25LS32 receiver on the strobe side connected with 2 twisted par of cable. But I am not sure how to set this up.

I have done a quick schematic how I think it might should be (se the pix). I would be super thankful if someone could correct it before I try to build it. 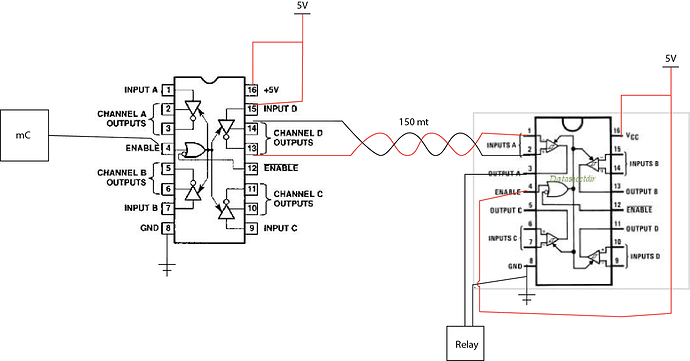 For your situation, I think you are making it overly complex for what you are wanting and in fact you would not be able to drive a relay of any size from the output of the 25LS32 chip.

These chips are ment for data communications, not driving relays.
Using it the way you have your schematic, you will potentially destroy the chip from relay back EMF quick smart.

All you need I beleive is a simple transistor circuit to drive your relay.
You can have one transistor near the Arduino to drive the cable say with a switched 5Vdc or 12Vdc low current signal. Then at the remote end, where you will have a power supply to actually drive the realy, you have a second transistor to do the actual current drive for the relay.

You don't detail enough information such as about the realy you are using to operate the strobe, or if you have a power supply at the strobe end.

This shouldn't be in networking protocols, but is the general electronics section.

I missed to put in the transistor. It is meant to be between the 26sl32 chip and the relay, so I can add supply voltage to drive the relay. The relay will control the 12V for the strobe.

Do you think that is a bad idea even then?

I do not understand when you say,

I missed to put in the transistor.

I am guessing English is not your first language?

I suggest not to use the 26LS chips as they are making your idea too complex for no reason or gain.
Just use two transistors like I mentioned, one to drive the 130m wire and one to drive the relay.

Why do you not put the Arduino near the strobe?

The arduino is next to the sensor now so I guess the problem would just be the same if I move the arduino to the other end.

What about the sensibility for disturbances with just two transistors and the long cable? I thought this would be a more safe and stable way to solve this problem (or so I heard anyway). It would also be possible to put up another arduino at the strobe end for a future wider configuration.

But what kind of cable should I use in your case?