Setting up Arduino uno as a USB Game controller

I am very new to Arduino. Very little programming experience(The little that I do is stuff like Unity IDE), and have been very interested in Arduino for a long time, and finally decided to pick up an ELegoo Uno R3. I've been watching some very basic tutorials that have helped me get started.

My question is testing my prototyping in Windows. So I have a push button that I have programmed(using the example push button sketch, and would like to see if I can use it to control a setting in one of the games on my PC. I have seen a lot of videos on youtube doing DIY Button boxes, but most of them are using other types of Arduinos that I don't have, like the micro and Leonardo. These ones show up as a USB Game Controller on their PC.

When I go to test my push button, Windows does not recognize my Arduino Uno R3 as a USB game controller. It recognizes the hardware as Unspecified, but I cannot find a way to test if my push button is working. I'm positive I've wired everything correctly, as I programmed my Serial port to display the value of my pushbutton as HIGH/LOW, and that works correctly, I just can't get the Arduino Uno to be recognized as a USB Game controller

What am I missing? Thanks for the help! 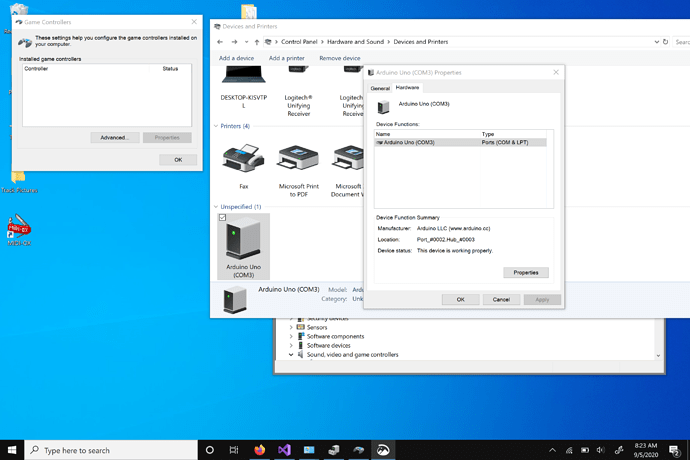 You've answered your own question I think: you need a different Arduino such as a Leonardo.

I see, so the Uno really isn't meant for projects like this. Does that mean there is no way to use the Arduino Uno as a USB Game controller? Which Arduino is recommend to get for a project like this? No idea which one to get. Preferrably one with more pins, but preferrably cheaper.

dabigboy:
I see, so the Uno really isn't meant for projects like this.

No it is not strictly.

dabigboy:
Does that mean there is no way to use the Arduino Uno as a USB Game controller? Which Arduino is recommend to get for a project like this? No idea which one to get. Preferably one with more pins, but preferably cheaper.

There is a way to make the (genuine) UNO function as a HID but it really is not worth the trouble.

There should be no problems with pins for a game controller, the Pro Micro has 12 analog pins included in its 20 pins and the other 8 non-analog pins would at least provide a matrix for 16 buttons/ switches using diodes in the matrix, that number increased by at least four for each of the 12 analog pins you do not require as an analog input.

Incidentally, I mention that a real UNO can be adapted as a HID because it uses a 16U2 co-processor as the USB interface with similar capability to the 32U4 in th Pro Micro. (The "U" in the part number means "USB".

) But many clones sold as "UNO" are not UNOs at all but a variant of the older Duemilanove with a different USB interface and have no HID functionality.

Thanks for the advice.

I tried out the Arduino unojoy method of converting the Uno to a Joystick controller. It took some time to figure out to do, but I got it to work and it actually worked very well.

I didn't find a support forum for unojoy(not sure where to put my next question), so I'll put it in this thread. I have four buttons mapped to digital pins, and 3 of them work correctly as push buttons, however the fourth push button is only recognized as a hat switch controller(point of view). I would like to make this another push button, no matter which pin I use the USB Game controller setup window sees this as a hat switch. Is there a way to change this into a regular push button controller?

Paul__B:
There is a way to make the (genuine) UNO function as a HID but it really is not worth the trouble.

Oh well, maybe it is worth the trouble if you follow the tutorial.

Clearly I am not familiar with the Unojoy. so no joy from me I am afraid.

Hi Buddy, I am trying to make a game controller for a new moba game (Wild Rift) . Searched a lot in this comminuty forum but no luck on finding a related guide. can anyone give an reference link ?
thank you