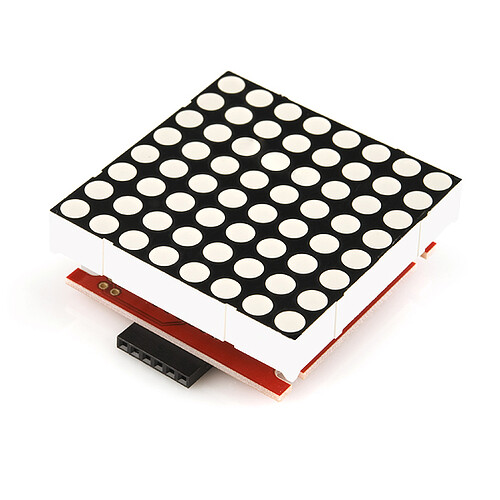 600×600 134 KB
, an LED Matrix + backpack and I've looked over the schematics and tried to build a project with it with its sample code given (http://www.sparkfun.com/datasheets/Components/LED_MATRIX_CODE.zip) with an Arduino Duemilanove.

An experienced arduino user helped me with the wiring connections with male to male molex connectors but after all the appropriate connections were made, the LEDs only flashed its 'startup animation' which is 3 lines of colours scrolling 3 times.

So after a few hours of searching for tips on how to use the backpack provided by Sparkfun, we decided to turn to forums to see if anybody else has had any experience with this particular product and if they could be kind enough to give some sort of advice about it!

Essentially, I'm making a LED 8x8x3 interface that counts up by integers of 14 ticking multiple times per hour. The code starts/stops upon holding a button.

The power up animation tells us you have power and ground correctly wired.

The failure to run the SparkFun example code would suggest re-checking the wiring, especially MISO and MOSI. If you have access to an oscilloscope, watching the signals on SCK/MISO/MOSI can help diagnose misconnections.

Also, if you are using an Arduino Mega, be aware the SPI pins are on different pin numbers.

Although I'm new to this, I wired it in this way using the Molex connectors and I made sure it they were connected in this way:
(I had an engineer friend wire it for me with a breadboard but i'm now making the direct connections from the arduino board to the matrix.)

As suggested in the code; at the moment we're unsure whether it's the firmware of the delivered matrix or another unknown issue.

I published a library named TextWhacker with an example script for that display backpack. You could use it as another test generator from the Arduino side. Code is here: GitHub - billroy/textwhacker: Bitlash project for printing to scrolling LED matrix

It does require you also install Bitlash, which is here: http://bitlash.net

Good luck with your project.