After a failed attempt using a WS2803d, I am trying to use a TI TLC5940NT to drive LED strips. I have succeeded in that I am able to drive the strip, however the brightness I can achieve on the strip is very low.

I tried a few random things, but I am an electronics neophyte, so I not sure what I am doing. The one thing I could guess was maybe I am only getting 5V from Vin on the arduino instead of the needed 12v? I noticed that that when the Gate of the mosfet is on 5V the strip is brighter than when it is on 3.3V, but when the strip is on 5V it seemed the same brightness as with Vin.

I attached my breadboard layout to this post, which is largely based on http://tlc5940arduino.googlecode.com/svn/wiki/images/breadboard-arduino-tlc5940.png
The main addition are N-Channel mosfets (SUP75N06 pdf, SUP75N06 Description, SUP75N06 Datasheet, SUP75N06 view ::: ALLDATASHEET :::) to handle the greater current draw (up to 2amp per channel for the strip).
I set up the mosfets based on a PDF from TI about using them for this purpose: http://www.ti.com/lit/an/slva280/slva280.pdf
I only half understand what I am looking at, but it did start working once I wired them up this way (albeit very dim).

In case it matters, I am using this library Arduino Playground - HomePage and the examples work.

Any insight would be great. Thank You! 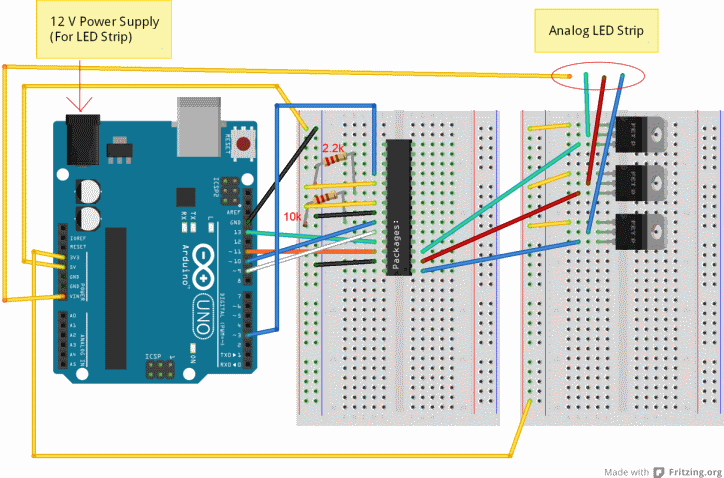 You must not connect anything to 3V3 with this circuit. The FET's source must be connected to ground.
The FETs look wired upside down.

Can you draw a schematic of what you are trying to make, that physical layout diagram is not very helpful.

The way I had the mosfets wired was based on http://www.ti.com/lit/an/slva280/slva280.pdf which seemed to be basically what I was trying to do. I now have rewired them what I think is standard and I attached both an updated layout and an attempt at a schematic (only showing the mosfets/led strip etc). When I have it wired this way the LED strip does not turn on. 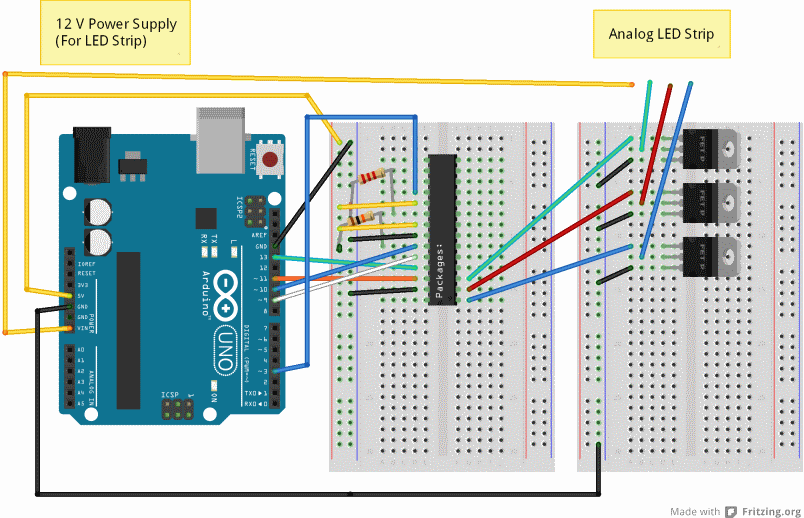 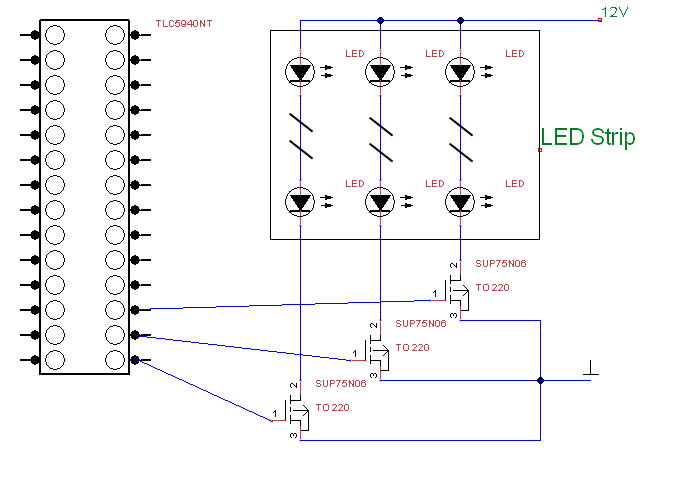 jhwarren:
If I take the wire from the PWM on the TLC5940 to the gate of the mosfet and apply voltage (or touch it) the lights turn on.

You need pullup resistors on the gates. Put a 470 Ohm resistor between 12V and the gate.

Thank You! It is working now. I ended up using 1.5K Ohm resistors to 5V.

Hello, I'm trying to do similar setup with P16NF06 n-mosfets. And I'm stuck with led strip not lighting up. So mosfets are working just fine being connected to arduino pwm directly (like Usage | RGB LED Strips | Adafruit Learning System) and when TLC5940 connected to arduino, short pieces of strip are working ok. But when I connect mosfet to output of TLC5940NT it doesn't work (outx to gate, color cable from led strip to drain and source to the ground, i'm using external power 12V power source to which +12V from strip connected) What do I missing or might have miswired?

What do I missing

You are missing posting a schematic of how you have wired it up, your words give an inadequate description of your setup.

Here is a schematic (atmega is representing TLC5940NT and FET P is n channel mosfet P16NF06). 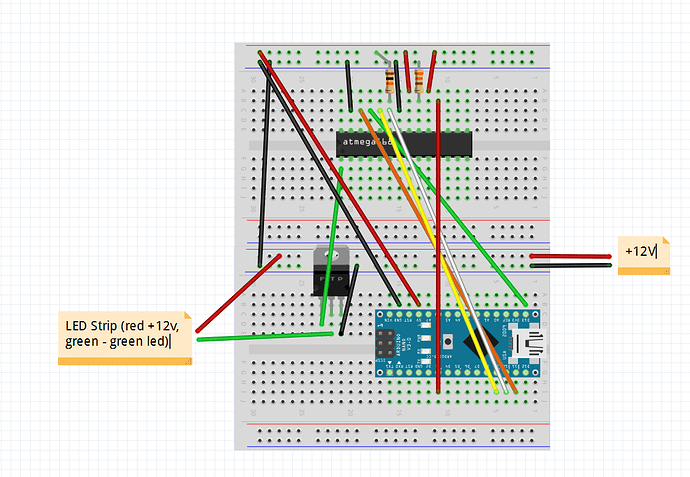 NO THAT IS NOT A SCHEMATIC.

It won't even work.

Grumpy_Mike:
NO THAT IS NOT A SCHEMATIC.

It won't even work.

What do you mean? I just used images of atmega and fet p, they have same amount of pins, but in fact i'm using actual tlc5940nt and n mosfet, just didn't find images of them in fritzing.

Ok, not schematic but picture of wiring on a breadboard, it's not enough to point what wrong with the wiring?

Have you tried to make that?
A TLC5940 is a constant current sync, it is not a current source so you can not wire it up like you showed and expect it to operate. Also the inversion in the FET means that you will never be able to turn the strip fully off it will always glow dimley.

I'm ok if I wouldn't be able to turn it off completely, as soon as I can control it from min to max with TLC. Аs I understood from replies above, topic starter finally was able to achieve this goal, so I'm trying to understand what am I doing wrong here and how do I wire it properly. Thank you for your help.

Did you read what it said in reply #3?

You can not use that FET because it requires 10V to fully turn it on. You need a logic level FET.

So if use these for example: Would it solve my issue?

Basically I should look for enhancement types of mosfets? Am I correct?

Bit pricey but it should work, don't forget reply #3.

In fact if you pay attention to reply #3 then you could probably use your existing FET.

Grumpy_Mike:
In fact if you pay attention to reply #3 then you could probably use your existing FET.

I think I got the idea. Thank you very much.