This Kickstarter project might be of interest to people here. It's a 100MS/s 45MHz USB 2-channel oscilloscope. That's plenty fast enough to inspect even the fastest 8-bit Arduino signals. It's also a signal generator, and an 8-channel logic analyser.

They promise software running on Android and iOS as well as desktop platforms. So you could carry a 45MHz oscilloscope in your pocket -- how cool is that?! 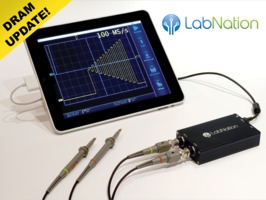 By the way I have no connection with the team behind this project; I'm just looking forward to upgrading my 250kHZ USB Instruments DS1M12.

Hmm looks ok, most USB scopes are a bit limited in bandwidth and that one is too really, but 45MHz is not bad. Certainly good enough for most tinkerers I would think.

They really need to get some protocol analysers on the go, and 2048 samples is not very deep when you can get 14 or even 56M samples with a Rigol (but certainly not for $179).

Still I think it would be very useful.

100Msps is NOT fast enough for 45MHz bandwidth. Forget Nyquist. You can't adequately show a sine or square wave with only 2 samples per cycle.

Commercial DSOs have at least 5:1 ratio between samples per second and bandwidth. Think about the 100MHz dual trace DSOs with 1Gsps sampling rate.

I see it has two 100Msps ADCs in there, that is good. And it has an arbitrary waveform generator, not just sine/square/sawtooth. And actual BNC connectors!

OK, I'm getting a little excited about this.

I've found a cheap (~$10) logic analyzer to satisfy my needs with AVR projects. If I were doing any analog/rf work I'd probably get one of the Realtek dongles and use SRD.

What really got me interested was the responsiveness: they claim 10ms delay and 100-200fps. If I get that on my Android phone I'll be very happy.

Actually, analog scopes don't turn everything to sine waves at the bandwidth "limit". It is usually a single-pole filter drop-off. So a square wave may look rounded off, but you may still see ringing if any is present, but at a much lower amplitude.

DSOs tend to have more of a brick wall filter, because the Nyquist limit depends on there being no (nearly no) spectral content above 1/2 the sampling rate. Or you get aliasing.

The signals from an Arduino have a rise-time of about 7ns, and some circuitry I'm
looking at now has ringing at about 60MHz on those edges, that 1GSPS and 100MHz
bandwidth are well worth it sometimes.

For most Arduino use, though, I'd agree that 100MSPS isn't too shabby since the
max frequency output square wave from a timer is 8MHz (12.5 samples per cycle)

7nS risetime would mean about 60MHz. Of course, your scope has to have much better response than this, or it will make the risetime look slower than it really is.

But as you point out, most use of a scope with an Arduino isn't going to be looking at the system clock.

I also own a bench 100MHz bandwidth 1Gsps DSO. Nice to have something portable, and battery powered.

MarkT:
For most Arduino use, though, I'd agree that 100MSPS isn't too shabby since the
max frequency output square wave from a timer is 8MHz (12.5 samples per cycle)

The ATtinyx5 PLL can run up to 64Mhz (and even higher if you play with OSCCAL), so you could a 32Mhz square wave out of it...

At some point, you may just decide you need a bench scope. If I were making the choice between one or the other, I'd get a bench scope with better specs. But if I can have both...

As I am keen to buy a scope soon this thread has caused me to re-review several USB scopes I've looked at before. I have the software installed for 5-6 of them, and I have to say that until you get to the $1500-2500 range the software is crap. Even the USBee QX at $2500 (including 16-ch LA) is not great, it looks real flash to start with but when you actually try to do things it goes downhill fast. I still like the QX for it's data decoding ability, but the UI aspects of the software are bad and their customer service is non-existent, 3 emails have not been answered. I planned to spend $2500 and they can't even answer a couple of questions.

Then there are the hardware specs. Most are pathetic, and the good ones (like the Acute TS2212A) are expensive (US$1300).

I can see the benefits to a simple scope on a phone for field work, but on the bench get a real scope from Rigol et al.

I used an older USB Scope for a while:
http://www.dpscope.com/
Is okay for slow signals, like serial.

Logic analyzer is better, especially one that can act as a protocol analyzer also, such as determining what SPI transfers are taking place and for measuring lenghts of software loops. This one does that wonderfully with 16 MHz Arduinos:

However, there are times when a fast USB scope is needed to see what is happening with a signal. Then a good scope is a must. I skipped over the USB scopes to get a good4 channel, 200 MHz digital oscilloscope. GDS-2204A
http://www.gwinstek.com/en/product/productdetail.aspx?pid=3&mid=7&id=1349
They are made in Taiwan (vs China).
I searched around and bought it here, and it was delivered with four 250 MHz probes as well. Shipping was not free tho, it was one of the "Some Restrictions Apply" items.
Still, I am very happy with it. Big screen, I don't need to commit my laptop to using it, I can plug in a USB stick to store screen images. Has a lot of measurement options, like frequency, number of counts of a pulse on the screen, time, etc.
Modules can be added later for logic analyzer as well should the little Saleae box ever die on me.
http://www.tequipment.net/InstekGDS-2204A.html

CrossRoads:
Logic analyzer is better, especially one that can act as a protocol analyzer also, such as determining what SPI transfers are taking place and for measuring lenghts of software loops. This one does that wonderfully with 16 MHz Arduinos:
Logic Analyzers from Saleae - #1 with Professional Engineers

I second that opinion. I bought a "Saleae" logic analyzer off Aliexpress, which I found out is a clone (I only paid $8, so I didn't do much pre-purchase investigation). I emailed Saleae to let them know about where I bought it. They didn't just say thanks for letting us know, they said let us know if you have any suggestions for our software (when I hadn't even purchased their official hardware). I said, since you asked, it would be nice if you had USB protocol analysis. A day later I get an email from Mark saying there's a beta of their software with USB protocol analysis, and a link to try it out.

The Saleae support is I think seconds to none, mine stopped working and after the first "Is it plugged in" response they just sent a new one. I can't remember what the warrantee period is but I'd owned mine for quite a while.

And yes, for embedded processing work an LA is 100x more useful than a scope, but you really need both. When you do need a scope an LA won't cut it.

The models I mentioned do both and that's really great to see analogue and digital on the one display, but I just can't get past the other issues I think. But have a look at the attached pic, that's the digital and analogue versions of the same signal, showing clearly the ringing that causes a glitch.

@crossroads, 200 MHz digital oscilloscope. GDS-2204A, any reason in your work to have wished you purchased the 300mhz model?

My 'work' is '328P designs, '1284P designs, and 2560 designs.
Fastest thing there is SPI transfers, and I do them at 4 or 8 MHz, and seeing nice sharp waveforms & measurements.
Anything faster, you're talking the higher speed boards and those all seem to turn into massive software efforts, so I'm staying out of that arena, not interested.

Graynomad:
The models I mentioned do both and that's really great to see analogue and digital on the one display, but I just can't get past the other issues I think. But have a look at the attached pic, that's the digital and analogue versions of the same signal, showing clearly the ringing that causes a glitch.

I haven't bought the gadget yet so that's a sample file they provide (one of 100s). But if we look at the wider picture it's seems obvious that it's something running at twice the speed as the bit clock.

Also look at the little glitch in the second pic. That's 5nS wide and would easily toggle some logic, but you'd never see it on a low-bandwidth test device.

EDIT: BTW this is the Acute scope, it actually has pretty good specs IIRC. 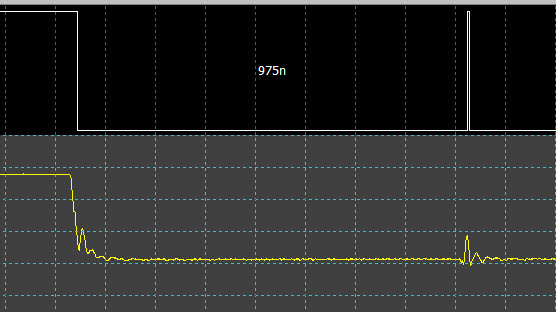 And just for fun here's an I2C trace with LA, scope and protocol decoding. Look how some of the lows aren't as low as they should be.

Man I'm talking myself into buying this :), but it's just too much for me to justify I think.

Insert Quote
And just for fun here's an I2C trace with LA, scope and protocol decoding. Look how some of the lows aren't as low as they should be.

Man I'm talking myself into buying this , but it's just too much for me to justify I think.