SEQUENCE: button (1) will be start the segment led at 00 - (button 2 and 3 useless until this button is pressed)

button (2) will start the count.. A0 to A1 - lots more later to be added to this and whatever i have for it's highest point, it can't go further

button (3) will count backwards to A0, it can't go any further

button (1) will also be the end and blank out the segment led, but based on either A0 or A1, a bi-color led will be lit either RED (A0) or GREEN (A1) - (this will change to light up certain leds based on buttons 2 & 3, but that is later.. using a bi-color led right now for testing purposes)

side note, there will be a power switch to turn on before any buttons are useful.. but i am not worried about that right now, just something to keep in mind for later.

So there are two questions, I'll look at the first.

You cannot connect two 7-seg displays directly to a single 595, why, because the 595 only has 8 outputs and each display needs at least 7, 8 with the DP.

So you either have to get a second 595 or use the 595 to control two decoders like the 4511, a BCD to 7-segment decoder. That will take 4 inputs and drive the 7 segments accordingly. 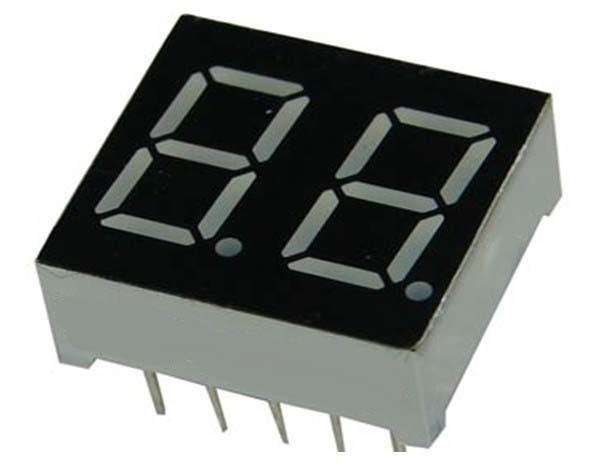 Ok, so it needs multiplexing. If you aren’t using the DP you can drive it by using the 8th output and an inverter to select each half of the display, so any value with say bit 7 set (> 127) will light one half and any value < 127 will light the other half.

Not hard to do but harder than using a second 595.

i have no use for the DP (infact i wish that dot wasn’t there)… but if have to use a second 595 then so be it… what do you mean by “an inverter”? not following

i have changed the project idea, please delete this topic.

This is not your personal support forum to supply you and only you with help. This thread contains meaningful information and should be preserved. Can someone please change the title back?

cupstacker: i have changed the project idea, please delete this topic.

um.. ok :~ but i do believe i am entitled to change my mind on something just as much as anyone else in the world and well i wasn't allowed to remove the topic myself... i asked

the better concept is my single 3 digit 7 segment topic..

cupstacker: I wasn't allowed to remove the topic myself... I asked

And it has now been explained to you quite elegantly - as well as this chap, why that does not happen and will not happen. ;)

cupstacker: the better concept is my single 3 digit 7 segment topic..

Well, how about you go back and change the topic here back to the original - in both your first and later entries - or something close to it - and make a point of not using "all caps" which is generally considered to be deliberately obnoxious.

This thread contains meaningful information and should be preserved.

no it doesn't, there is nothing of relevance here - i alone haven't given all the info, nor has anyone that was trying to help.

i beg to differ, i was not try to be obnoxious in any manner, i just wanted the topic deleted simply because there was no point in continuing with it and no further help in the topic would help anyone because i have not completed concept of the project - i re-thought the project out and the new topic is best

i was not try to be obnoxious in any manner,

Maybe not, but that is how it comes across please don't do it.

This thread contains meaningful information and should be preserved.

no it doesn't, there is nothing of relevance here - i alone haven't given all the info, nor has anyone that was trying to help. because i have not completed concept of the project - i re-thought the project out and the new topic is best

You asked how to connect two 595 chips together. It is a valid question. I responded. Other people responded. Other beginners may be interested in the same thing. If you have lost interest please just move on without making a scene.

I don't care how uninterested you are in it now, we have taken the trouble to reply and we deserve to have our replies preserved, and also to not have the question removed, which makes the replies look silly.

i have changed the project idea, please delete this topic.

Yes, you changed it from using a 2 digit LED to a 3 digit LED. Hardly a radical change. Anyway I’ll lock this thread, I think we’ve done it to death now, now that you have moved on to this slightly larger display.