I finally got annoyed of having a million jumper wires between my breadboard/project and my Arduino... I figured I would need something like luidr's phi-connect shield (Phi-connect | Liudr's Blog), but for the arduino mega. However I also wanted a bit more flexibility so something in between individual cables and a 32 IDE cable seemed apropreate.

Anyway, here is what I came up with: 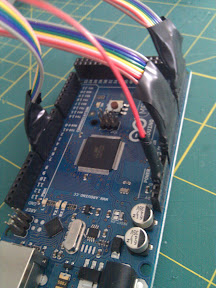 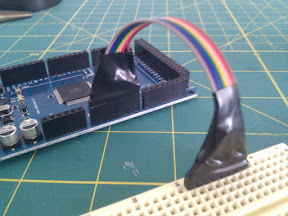 If anyone is interested, I have a couple of pointers on how to make your own and more pictures on my blog: 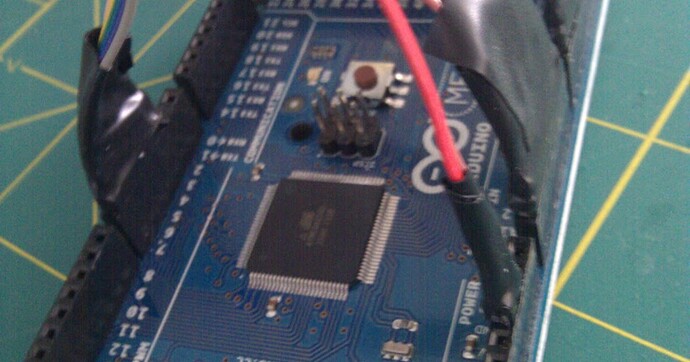 EDIT: For the record: DONT do this. Unless you are on a super, super, super tight budget, buy these: http://www.pololu.com/catalog/categor...

Wunderbar! You are much more patient than me. I would never bare the burden to solder that many headers to thin wires like you did. BTW, you did exactly what you need, all the analog pins + a few digital ones and there is no need for stacking

thats why I did it

but, if you do design a propper breadboardbreakout / phi-connect style option which is priced similerly to your existing breakout board I still would buy a couple.

(btw. the IDE discussion from the electronics thread was quite useful too, as I am using some IDE cables for another aspect of my current project... I never even considered the problems I might have run into without it...)

You're doing it the hard way. Get crimp terminated wires and crimp connector housings from pololu.com.
Standard wire lenghts are 3", 6", 12", and longer.
Housing can be a myriad of sizes - 1x1, 1x2, 1x6, 1x8, 2x3, etc.
Male-Male are handy for plugging into arduino shield header and to a breadboard.
Female-Femal are handy for sliding onto the back of wirewrap pins.

Here's a male-female I made to extend the connection from FTDI programming adapter down to a promini board for example.
The pre-crimped wires can be had in bags of 50, its really handy to have a collection of different sizes.
The pins can be slid out of the housings as well if something gets assembled incorrectly.

... meh. I was shure that someone would pop up and post the solution.

but I felt like practicing soldering + I need to demo something tomorrow, so its all good

(sort of a bummer that I am not allowed to publish the stuff I am working on - so much more interesting than a bunch of cables... )

anyway, thanks for the pointer, I will order some tomorrow.

fkeel, I have done the same as you many times (with more connections some times too) - the phi-connect is pretty nice though

I just wanted to drop in and thank the OP for opening this thread. I got the pololu stuff and made a custom plug for a mega2560 hookup to a front panel I made and they worked great. Now I don't have to remember where all twenty of those stupid wires go, I just pull one plug. Nice solution for that kind of problem.

Its nice having the right tools, isn' it!

... it makes so much difference when you have acces to the tools and components you need...

... actually... even just taking care of your soldering iron, keeping the tip nice and clean can improve your work experience dramatically

I will just add that your job can be a lot easier with some kind of labelling machine, such as Rhino 5200 label maker, and you can wrap a few of them with one tape, and organize it a lot easier.