Hey everyone, I uploaded two PDFs to share below for board etching. As indicated by the thread title, they integrate an ATTiny85 with the 3-pin NRF24L01 connections provided by NerdRalph. One file contains the component footprints and values, the other contains the traces and can be printed for UV-exposure. You’re welcome to try toner-transfer, but YMMV.

I do have a question about the 3-pin ATTiny85 connections, though. Using that schema, digital pins 0, 1, and 2 are connected on the ATTiny, but in the code provided from here, it defines CE and CSN as pin 3. That presents obvious problems as nothing is connected to D3, and is supposed to be available for use; this ties it up with nothing connected. So, can CE and CSN be define as pretty much anything then, or is there a reason this guy volunteered to delete an extra pin, making this effectively a 4-pin solution?

In general, any I/O pins can be used for CE and CSN.

I have been trying (successfully) to get the nRF24 to work with an Attiny alongside a DRV8833 DC motor driver which requires 2 PWM pins, a Serial output pin and an interrupt pin, and of course, SPI for uploading code. It needs careful allocation of pins

wow, this looks cool. would you post some photos of your board & components on it? are you just plugging in the nrf24l01+ module (eg from ebay) into the board? is this Tx only or can the ATTiny85 receive data as well? thanks, m

At the moment I only have a very untidy breadboard layout. And I have decided to move to an Attiny 1634 which has more I/O pins and a smaller SOIC footprint so I won't be developing the Attiny84 further.

I don't have time now but I will try to remember to make up some sort of diagram for you tonight or tomorrow.

I attached a photo of the top of the board with components below. The NRF module goes into the female header pins.

I ran across some very strange behavior with this board that's pretty much stumped me. I figured out how to fix it, but I still don't know what the problem was, or why the fix worked.

I was testing this board layout, and it does work, but only if I kept my finger pressed onto the tips of the pins of the NRF module. At first I thought it was a connection issue with a loose pin, but after hours of investigating, I figured out that if I put a 10 nanofarad capacitor from the antennae of the NRF to the ground of the PCB, it works perfectly and ran all day without dropping a single packet.

silly_cone:
I attached a photo of the top of the board with components below.

I think you forgot the attachment.

I am interested to see a photo showing the attached 10nF capacitor. I have had no problem with my nRF24s but a friend is having a problem with his.

yeah, I was having difficulty with the site all day, I suspected it was caught up in that massive DDOS attack.

Okay, photos should be attached now.

When trying to diagnose the problem, I tried different ICs with different clock speeds, different power supplies including battery. Nothing made a difference, but if I pressed my fingers against the header pins, it worked. Or if I touched my finger to the antennae, it worked. So that somehow suggested to me some kind of capacitance, so I gave it a shot as kind of a Hail-Mary, and it started working like a champ. I used the sender and receiver sketches from here as the code: 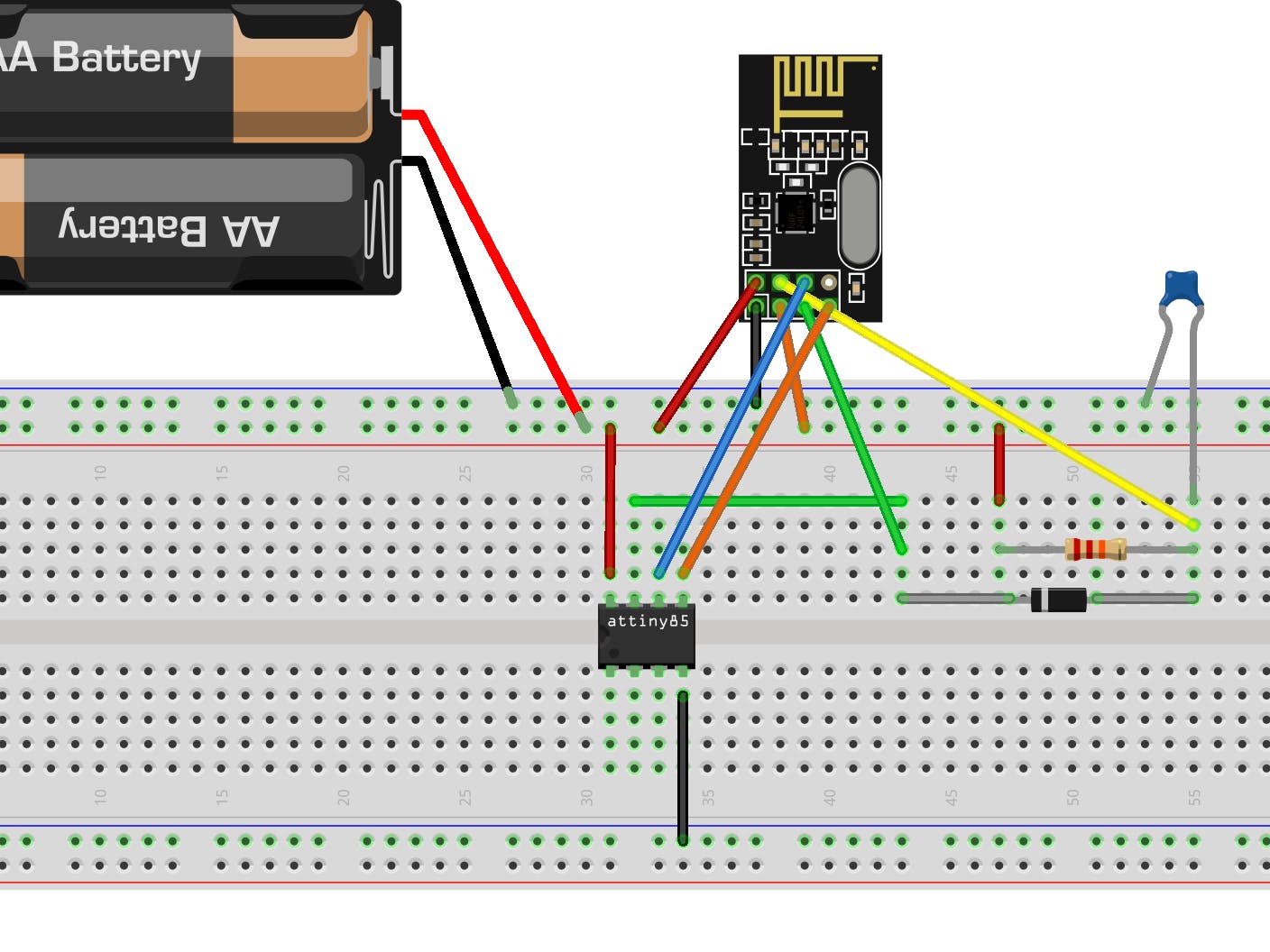 Sending and Receiving data with nRF24L01+ using only 3 pins of ATTiny85. By Arjun Ganesan.

Images from Reply #6 so we don’t have to download them. See this Image Guide

Most people post images that are unnecessarily large but yours are definitely too small. It looks like you updated thumbnails rather than images. Pictures that are 640x480 are good.

yeah, I took some larger ones. I’ll go back and get them into the post here in just a minute.

The pic with the cap on the NRF is a different board layout of the same circuit as the other two. I went through a few revisions. But the issue was identical between all of them.

Thanks for the pictures. I will mention your solution to my friend with the problem.

Your nRF24 board looks just like mine and I have had no problems.

I have not seen my friend’s board but I think, from what he said, that his nRF24 is lying parallel to his circuit board like yours. Whereas when I built my veroboard devices I deliberately mounted the nRF24 perpendicular to the veroboard. I hope this sketch is clear.

If you did it intentionally, I assume there was a reason for doing so. Did you anticipate the possibility of interference or something similar? These circuits aren’t taking hardly any power, but is there a possibility of EMF weirdness going on that gets filtered out with the cap?

Without knowing a great deal about it I thought it would be best to keep the antenna as clear as possible. My device is in a hand-held plastic box and the antenna sits just behind the front face of the box. That seemed to me the best way to get the signal in and out. I did look at the radiation pattern but I can't remember which way it is now.