Half bridge n-MOSFET driver for Arduino with bootstrap, fast switching 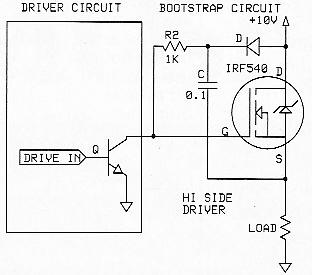 With reference to the above thread and message and pic shared by "zoomkat" i have few doubts. And i have searched a lot on youtube and well as google but could not understand it, thus asking it here.

whether it will be a inverting circuit ie, when the drive input (like from arduino) is high the mosfet will turn ON or OFF.

If anyone can please walk me through the stages of the circuit, it would be of great help and will make me understand the whole concept of bootstrapping clearer.

What i understood so far is that when the Transistor is OFF thus LOW signal from driver circuit/arduino the capacitor will charge via the diode and the mosfet will be off and thus no conduction. When the arduino pin is HIGH the transistor will turn ON .... this is where i fail to understand the working of the circuit.

Also even when the transistor is off the gate is connected to drain via the resistor and thus will have same potential as the drain and thus why this does not trigger the gate to switch on.

Also if I add another N-MOSfet to the circuit will that also be in same phase of in opposite phase and if same phase how to invert the phase of both of them.

FYI, trying to make a DIY synchronous buck converter and want to use mosfet instead of the diode between the first mosfet and inductor.

I keep turning that design around in my head, and I can't figure out how it works either - though I see the same design used elsewhere too, so I think the problem is on our end.

puneet1984:
FYI, trying to make a DIY synchronous buck converter and want to use mosfet instead of the diode between the first mosfet and inductor.

You realize that switching DC-DC converters are extremely layout sensitive, right? You'll need to design a PCB for this, paying very close attention to the layout. In some cases, general purpose prototyping and breakout boards can be used (I've done it), but only if you're able to keep all the connections in the high-current loop very short - and the performance will be negatively impacted compared to a PCB designed for purpose. Breadboard is never appropriate; the author of the book my father was reading about the subject described it as "kryptonite" for switching power supplies.

Oh, of course! The capacitor is there so that when the mosfet is on, and the drain and source are at approximately the same voltage, there will be enough voltage on the gate to keep the fet on!

Thanks a lot for the replies, but still my original question seems to be unanswered.

herbschwarz:
First, this is not a half-bridge circuit: it is a high side driver.

This is not my design or the wordings, i have taken it from another discussion on this forum and have attached the link to the original thread also.

Thanks a lot. this is what i thought of but was not sure.

Now if you or anyone can help me out with a non-inverting schematic for the gate driver bootstrap circuit.

Is there a reason you cant just invert it in code? You could use another transistor to invert it, but the result will perform no better (and likely a bit worse), and inverting the output in software is trivial.

Re 2 and 3 - yes, schematic is right (though heed my warning about layout above - a poorly laid out dc-dc converter will be unstable (poor output voltage regulation), inefficient, and will radiate electromagnetic noise like nobodys business), see discussion above - we have explained how the circuit works.

Hi Puneet1984,
I re-read your previous post, that you
want to use a MOSFET instead of a
Schottky diode. That is a bad idea
because the MOSFET has a reverse
voltage protection diode built in.
It will conduct current when the
diode should be reverse biased
and totally switched off. Besides
those diodes are designed for best
performance in circuits like switching
power supplies.
Herb

He's doing what's called a synchronous rectifier... it's arranged so that the body diode is in the same direction as the normal diode would be, and when you turn it on, the voltage drop across it is much lower than it would be with a diode. This is widely used in electronics, including in every computer made even vaguely recently to provide the core voltage (3/10ths of a volt drop across the diode is a big deal when your buck converter's output voltage is around 1v at 90A, which is typical of a high-spec modern CPU).

Now that I think about it, depending on the topology of the DC-DC converter, that bootstrap circuit may not work, or may be unnecessary - because the way you use it as a rectifier in a DC-DC converter is very different from how you use it when switching a load normally. This gets tricky mighty fast....

Therefore, for switchers at a few amps, the Schottky diode
can work well, but for higher current supplies, the diode
has to be a much higher power device. With proper circuitry,
an N-ch MOSFET should be used since it can conduct with
very low VDS and dissipate the power necessary.
Did I get that mostly correct?
Herb