So a little idea that came to me the other day for making sensored BLDC hall-outputs
visible: 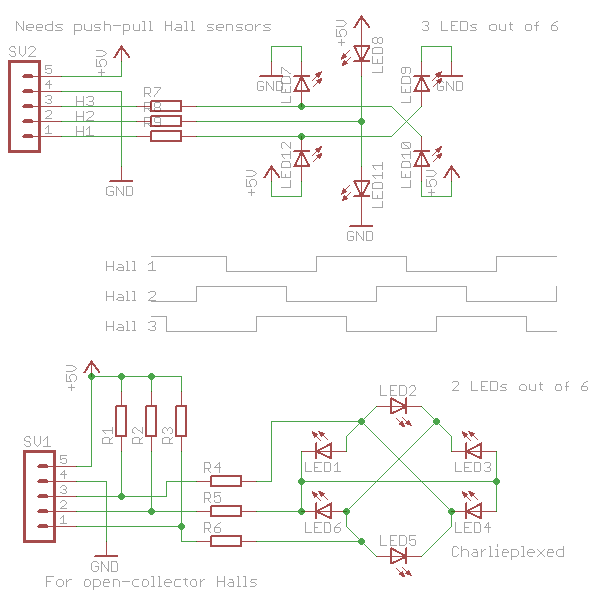 [Firstly these only work with 120 degree signals, if the hall sensors are 60 electrical
degrees apart neither of these circuits work. The 120 degree phasing is such that
either 1 or 2 signals are high at any one time]

The top circuit relies on having LEDs with a large forward voltage (blue/green/white)
so that with two in series at 5V they don't both turn on. It would be more sensible
to run at 3V3. However it assumes push-pull hall sensors which I fear is rare. It
shows 3 LEDs out of 6 lit up in a chase sequence.

The second is really just 3-wire Charlieplexing, but includes pull-up resistors
so it works with open-collector hall sensors, and shows just 2 neighbouring LEDs
out of 6 on at once and I've breadboarded and tested it with a real motor. With all the
LEDS identical the pull-up resistors will hold the lines high enough for reliable
detection, but you mustn't make the resistors too low a value and overload the hall
sensors, I've used 680 ohms and assumed 1.7V lost in red LEDs and this takes
about 10mA at most from each hall sensor.