Converting an arduino project into an industrial strength product?

This question is quite general, but I'm looking for a starting point for how to turn an Arduino project into an industrial strength product. I have a very simple working application using an arduino and a small bread board with one sensor. The sensor sends voltage readings via the COM port to the laptop where the software takes over. The entire project uses 5 wires... it is that simple. Are there business that will take arduino projects and turn them into a product? Are there YouTube videos or tutorials as to how to approach this?

Thank you in advance for any guidance you might suggest.

I think Crossroads may be someone you could contact about this.
There is a 'Gigs and Collaborations' area on this site you could solicit work.

I believe the Amtel controller data sheets don't recommend using in industrial situations, but then again it may be just for health applications they warn about.

The only occurrences of the word "industrial" in the ATmega328P datasheet is the Operational Range in the Ordering Information tables.

Using an Arduino board in an industrial setting is a different situation but it's definitely possible to use these microcontrollers in a properly designed industrial product.

Recently I designed a system to control my Aeroponic garden. In initial stages I was using a Raspberrypi and bread board to connect the system in place.

Couple of months ago I started looking into Arduino in a very serious way. As a result I come up with a design to run the system using Arduino. I decided to use Arduino Nano and tested all the working scenarios in a bread board, just like what you did.

Then I designed a schema and PCB layout using Eagle. Later I prototyped it from a PCB Manufacture for 7$/board and I soldered every thing in place. See the completed board below. 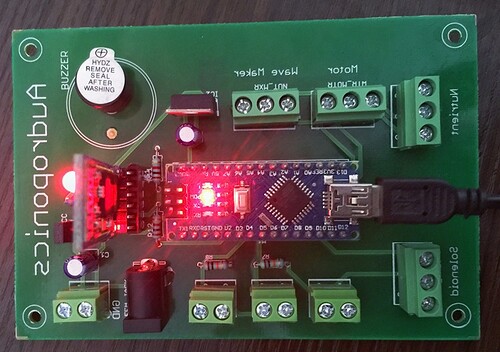 If the PCB design is simple and single layer, then normally I create a home made PCB and try it out first before sending to a fab house.

There are some fab houses designs PCB's if you provide your requirement but that will cost a lot. I tried once and cant afford the cost, so started learning it my self. 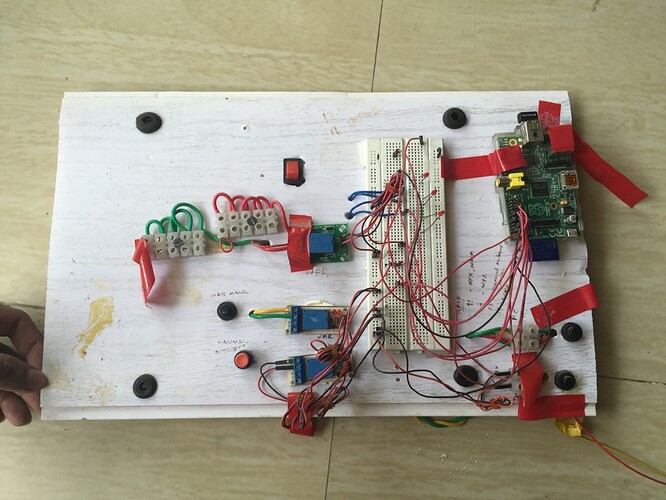 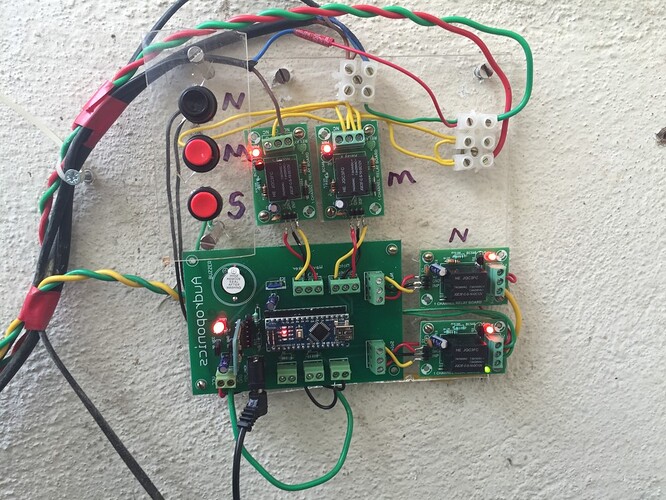 Ednewbie,
Sure, contact me, I take prototypes to custom solutions all the time.
This one for example started out as connecting an Atmega644PA to an Uno, then more bits were added to expand the functionality:

and a small bread board with one sensor

I'd say the main thing would be to have a PC board made to replace the breadboard. And make a few spares. The biggest issue with anything "homemade" in an industrial/production environment is maintainability and serviceability. If you're not around in a couple of years and the thing breaks, can they repair it?

There is something called the [u]Ruggeduino[/u] if you're concerned about electrical "abuse" (voltage surges, etc.).

Are there business that will take arduino projects and turn them into a product?

I've seen it used once and I was kind-of surprised. It was in a fairly low-volume and expensive item (maybe a few hundred or a thousand were produced and I'd guess it was priced at around $1000 USD).

Of course, there are LOTs of products built around the ATmega chip. The things that make the Arduino special are the bootloader (and IDE) and the fact that it comes as an inexpensive assembled board that serves as the development platform and can also serve as the final product. Otherwise, it's pretty much the same as any other microcontroller board.

DVDdoug:
The biggest issue with anything "homemade" in an industrial/production environment is maintainability and serviceability.

Yes, and keeping the physical and electrical dirt out of it.

I fully agree. And that's where the money lies in an industrial project. You have to consider all kinds of occurencies you might think of. Even the most unlikely ones - there is always someone who will treat the equipment as you as the developer might not have dreamed of.

This is where you have to put all kinds of precautions in - and that blows up the cost.

Besides of the ruggeduino there are at least more than half a dozen other alternatives on the market meanwhile, e.g. industruino, controllino, industrial shields etc.

for me it was not ruining product. not letting the clean room get reverse air flow, not letting the nylon machine slow down..... I think by the time my stuff was involved, the life safety issues were well covered.

as for 'industrial' that has certain inferences to individuals,
what will happen if power is mis-applied ? can it survive being plugged in improperly ?
that goes for the sensors as well as the main board. what about static electricity ?
how is the program written ? does i follow the Windows platform of crash and fail, or does it follow a more crashproof or crash recovery method ?

as a note, if you have an idea for a thing, spend some hours googling and reading as much as you can. all too often there are products that already do what you offer.

Dear forum/post responders - Your comments are incredibly insightful! Thank you for taking the time and energy to share. I have enough now to get started with my next steps. - Ed