I am new to electronics and I have a simple circuit involving some programmable LED's and an RF module. Everything is hooked up to a regulated 5v DC power supply capable (bench type) that delivers a max of 1A.

What can I do to fix this? Should I use a capacitor? I have put some capacitors in the circuit, one next to the RF and another one next to the LED strip, it has made some difference but not a lot. I have a collector of electrolytical and regular capacitors at my disposal.

Can you help? If capacitors are the answer than I would like to learn how to determine the capacitor required in the circuit.

The power supply may be inadequate and its voltage is dropping. If so, a capacitor won't help.

If power supply noise is the problem, you can try using a decoupling filter: put a 10 Ohm resistor followed by a 100 uF capacitor (to ground) in the V+ line to the transmitter module.

Thank you. I tried the second suggestion and I noticed that this really makes a difference, thanks. However the problem still persists, and I am back to suggestion one. With the multimeter I discovered that the voltage greatly varied per color and brightness, causing the RF module to fail because this one (el cheapo) is very reliant on 5v.

I've tried a few different power supplies but each and every one I try has this problem. What can I do to stabilize the 5v on the RF module? Why is this voltage dropping? I am still below 1A according to the bench power supply.

Is the voltage at the point of connection to the power supply still 5v? If it's 5v at the power supply, but not at the load, there's a voltage drop occurring somewhere inbetween, due to a connection that isn't able to carry the current, or something in series with the load that shouldn't be there. If you run it for a bit, with a heavy load, the part where the voltage is being dropped should get warm. How much voltage drop have you observed, and how much current are you drawing?

By "linear regulator" in the diagram I meant the bench supply described in the OP.

Everything is hooked up to a regulated 5v DC power supply capable (bench type) that delivers a max of 1A.

One ampere is not much for a bunch of LEDs and other circuitry.

So Fexduino, how are things wired up now? Got a schematic? Hand drawn is fine.

Also, how are you making the connections? A picture would be nice (in addition to schematic) so we can get an idea of whether your hardware assembly technique is okay.

Thanks for the responses everybody.

The schematic is as attached right now. Ive noticed that the voltage drop is far less when I use good wires instead of jumper wires. Also the crocodile clips were too flimsy for the 1A current the strip requires and hav been swapped for good wiring.

At the moment I am still suffering from this problem though, the RF modules are simply very sensitive to voltage. This explains most of the receptions issues Ive had.

I've read about voltage drop and I think the ~1v drop I am seeing now is to be expected from a 1.5m ledstrip operating at 1Ah. I've tried using a 7805 regulator but that doesn't keep a steady 5v voltage is the source voltage is <5v.

What other options do I have? Thanks for all your replies and insights.

I have a few 12v led strips that I power using 12v supplies and the 7805 for the 5v RF and Arduino, that works perfectly. 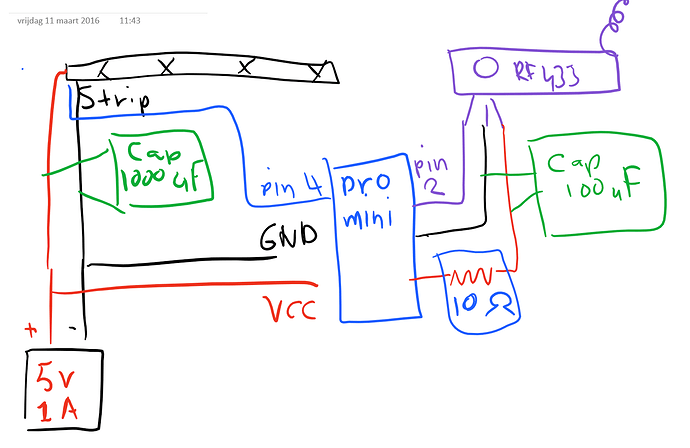 Are VCC and GND for the radio truly connected to the Pro Mini? - Scotty

Yes. Is that bad?

Should I take a look at a step up converters? Will that supply a steady 5v to the RF? I read something about having coils which could be bad for RF.

Hope someone can still help me, what is the best solution here? Double power supplies?

Fexduino:
Why is this voltage dropping? I am still below 1A according to the bench power supply.

What is your supply current limit set to?

Not sure if this can be set, it shows 1A max. Anything above that will turn it off after a few loud beeps.
I have also tried a 3A wall adapter? Do you have tips?

Does anyone know what I can do?

If the LED strip is using PWM to control the brightness, the average current draw is much less than the peak current draw. The peak draw may be briefly exceeding the power supply maximum.

Take a look at the output of the power supply using an oscilloscope. If not constant, that will interfere with RF transmission. The solution would be to use a different power supply for the Arduino and the transmitter.

Thanks dude, that was kinda helpful. I'm going to try that step up converter and see if that pans out, otherwise just stick to double wall sockets which is what I have now. Thanks for the help, I appreciate it.

Allright. I'm back with a little progress. Unfortunately even with double power supplies I have RF433 signal issues. I noticed that the Arduino and the RF433 module work fine by themselves. Only when I connect the power supply for the LED's the RF433 range drops from meters to centimeters.

I think I have accidentally found a solution though, I tried connecting a diode between the GND of the Arduino+RF and the GND of the LEDs. My reasoning was that the current flowing to GND was messing up something inside the Arduino.

Now I am thinking I might be able to remove the secondary power supply but I am not sure. First I need to understand what is happening. I know little about electronics and I could use some explanation, in simple terms. I tend to think of electronics from a physical perspective.

Did I do a good thing with the diode?
Why does it work?
Can I somehow eliminate the secondary power supply now?