I haven't used Arduino IDE on my main win 10 computer for a while but today I found the font to be different. My Python 3.5 has switched into some Chinese font. It took me a while to find out which font Python IDE comes in default and I switched back. But Arduino IDE has nowhere to specify fonts. There are a number of fonts in the included Java but the only option for font is language, not font. 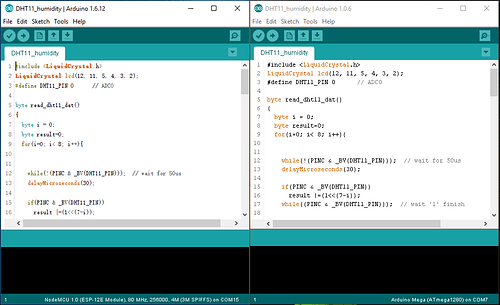 Did anyone have this problem too, especially if you have a second language input installed?

How to change editor font:

Glad I was able to help. I just switched to Consolas in the Arduino IDE recently and I found it to be a big improvement. With the default font a lowercase l and the number one looked identical and there was not an obvious difference between an upper case o and a zero; not a good situation for programming! I've now started using Consolas throughout all my software for consistency.

It's very strange but I feel uncomfortable if the font changes. Python uses Courier New, which has the same 1-l problem but not the 0O problem. Anyway, when that font changed into Chinese (it has a subset that includes all English letters) last week, I had trouble focusing on the code. But switching to Consolas on Python didn't create such distraction. Maybe it is a glyph aspect ratio change that made me uncomfortable, not the exact font face details. Both Courier New and Consolas are wider than that Chinese font.