Diabetics can now get a device which reads their glucose levels constantly and stores it in a small device that is attached to their arm, which can be read off using NFC.
My wife is type 1 diabetic and uses a FreeLibre NFC electronic module that attaches to her arm which constantly reads the glucose reading and stores it in ram. A watch battery supplies power it lasts about 2 weeks before it starts to read inaccurate readings and needs replacing, but it must be read manually using the NFC device in the back of a normal mobile phone. What I want to do is build a small wearable on top of it, strapped or stuck on, that uses its NFC connection to interrogate the glucose reading, every 5 minutes and transmit it via Bluetooth to a nearby device, like a phone or smart watch. So the user has a device which they can set high or low level alarms, that way they will never have hypos again as the alert will go off and give them a chance to get glucose before its too late.
THe protocol for NFC it uses is 15693 at 13.56mhz and I believe the NFC device we need to use must talk to the Bluetooth transceiver via SPI or UART?
I found a project similar online done by the Adelaide university but it has limited detail, and no connection information.
What I am asking is if anyone here is familiar with components that are similar or can be used in this project. I was even considering a small solar panel on the top so it can get a charge and go to sleep, and wake up do the interrogation, send it via Bluetooth to the smartwatch and go back to sleep?
A production device is made by MIAOMIAO but apparently it wont work with the 14 day version of the Libre we get here in Australia, and also the miaomiaos have been failing randomly.
Is there any easy to find components I should look at first that could achieve this projects objectives?

Hi,
How often do you at present read the module?

If you read it more frequently, the battery life will possibly suffer.

Reading frequency can likely go down indeed. Every 5 mins is a lot, you won't be reading it manually more than a few times a day.

Then for your project:

Are you still using the Freestyle Libre or the Libre 2? As far as I know the Libre 2 uses encryption which isn't broken yet, so that will probably be a problem. That is the reason, that none of the third party Apps supports Libre 2 as of now. Or are you using a different version in Australia?

Sounds like there's not much "libre" about that device...

No, it's big pharma earning a lot of money (each sensor is about 60 Euro), but it actually makes a diabetic's life easier and it makes taking blood from your finger several times a day unnecessary.

There are ways to get data from a continuous glucose monitor but the models listed may not be available where you are.

This is part of the much more ambitious project (OpenAPS) to close the loop between a CGM and an insulin pump. This makes for alarming headlines such as "I Built My Own Pancreas" and "Hacking Diabetes: DIY Artificial Pancreas System".

yes being locked out with encryption is a problem!
I don't believe we have the Libre 2 here, Ill check with the missus!
meanwhile, im hoping someone can point me to hardware that is best for this project? then I will gather up bits and see what I can get happening!?

id say at present she reads the reading with the Libre1 model about 20 times a day. But the whole point of this is to do readings every 5 mins or 10 mins or so, so the alarms can watch the readings on the smartwatch, that way its possible for her to be alerted when it drops to dangerous levels. Currently she has to manually scan just to find out if theres any danger at all.
The project I found that may work says they use a CR95HF chip and that the RFID protocol is 15693 but I can not find any parts on ebay or elsewhere that uses this. The only one I know so that might work is the Solutions Cubed BM019 unit from USA but its expensive and I do not have confidence enough to try it.
The first Arduino unit I thought I might try would be a nano, and I have no idea which Bluetooth unit to use. Does the Bluetooth unit and Arduino unit need to talk to each in SPI?
And what software will I use on the phone or smartwatch?

The CR95HF chip is listed on a.o. Digikey and Mouser. Probably without PCB, though - a quick search on Taobao showed CR95HF based boards; they must be available on aliexpress and likely e-bay and co. as well.

Most BT modules communicate over

And what software will I use on the phone or smartwatch?

Probably software you wrote yourself...

You could consider using an ESP32 instead of Arduino. It has BT (and WiFi) already included and has good deep sleep functions for power saving.
For creating a simple app for your phone you could use thunkable or a similar service.

I have worked allot with ESPs before so perhaps your right. But I assume I will still need to find a NFC device that supports the correct protocol. A device that has bluetooth and the NFC needed doesn't exist.
I should also point out that this site is the original project from 2 years ago.

But it's confusing. Where is the device the code is programmed? Is it the NFC module? The HM13 bluetooth module?
I could simply buy those parts and connect them up according to their instruction manuals but I'm just not sure.
Can anyone shed some light on it?
The missus is really keen for me to get something working so she can stop getting eye needles!! Hypos really mess up a persons eyes and teeth:(
There are NFC CR95HF devices available here for $50 that appear compatible so i could try one of those.
There's a dexcom solution too that's not too different which I am currently checking out.

It's hard to believe that nowadays there is no such glucose monitor on the market that comes with ready made phone connection and monitoring app. As it seems all you want is "get it to work" that'd be the obvious route.

Yes, it's currently a Rube Goldberg construct to get my readings from my own CGM. It should be a straightforward app.

In my case I use the Dexcom G6. With Nightscout I get my CGM data. Using my private API end points I get my data into Home Assistant every five minutes. From here I publish the data via MQTT on my local network.

I built a few displays using a Wemos D1 Mini and a pair of Adafruit 14-segment displays. I can see at a glance the time, my glucose within 5-minutes, and my trend. The only problem is that I have to be near my phone because the Dexcom app on the phone reads the CGM data. 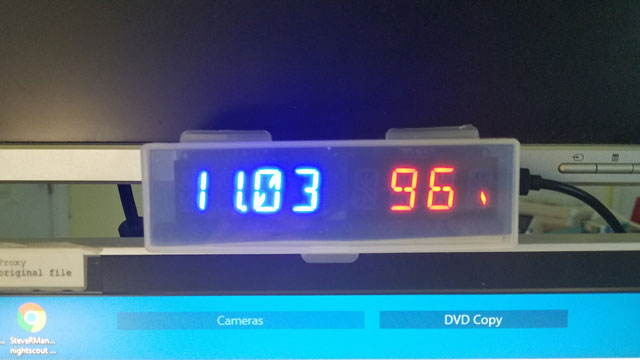 In this photo, the left display shows the time and the right display shows my BG. The "-" at the end shows that the trend is steady. "/" means it's rising and "" means it's dropping. If it shows an asterisk "*", then the data is stale- usually if I am away from my phone.

I also can see my BG on my smart watch, or I can ask Alexa.

I have since decided to wait on this project (even tho I bought the hardware already, but I couldn't find source code to make the NFC device talk to the Bluetooth device or a standard Arduino processor like the uno or nano (for a start) but now a company called MiaoMiao make a device for about a days worth of wages, that will work for a day, that will send a Bluetooth signal reading every 5 minutes. Im ordering one as soon as they make it work with the 14 day version of the sensor.
Cheers for all your help guys.