I have been looking at wiring up a multidrop RS485 link over a distance up to a kilometre and have been encountering differing views on whether just the A and B wires are needed or whether a ground wire is also required for reliable communication. Some web pages say that the ground wire is necessary while other say that it is not necessary and others say that it actually hampers reliable communication.

The comments from (apparently) professionals to the Q&A tutorial at the start of the page also shows a lack of consensus.

I was wondering what some of you guys have experienced with RS485 in this respect and your views?

They call lots of stuff 2 wire but i've never used any wire to hook it up that didn't have the power with it.
red black green and yellow. Alarm wire.

It's a 2-wire differential protocol and you don't need a ground wire.

But an some applications, such as DMX512 lighting control, a 3-conductor XLR connector is used with a shielded cable.

A ground wire is mandatory !

Differential links provides a gain (x2) and noise immunity.
But it is imperative that the receiver and transmitter share the same reference voltage OV ie GND

The only exception are in the case when there is use of a flux, magnetic with transformers or optical with fibre or optocoupler

68tjs:
A ground wire is mandatory !

Differential links provides a gain (x2) and noise immunity.
But it is imperative that the receiver and transmitter share the same reference voltage OV ie GND

The only exception are in the case when there is use of a flux, magnetic with transformers or optical with fibre or optocoupler

Like I said lots of stuff calls it self 2 wire but it still needs the ground I never installed any alarms with optical with fibre or optocoupler. But a lot with four wire and some with shielding and 3 wires nice stuff and you can bet it was right way to do it cause after all it's there to save your life It's was for fire as well as break in .

Here is the suggested wiring from the LTC1480: 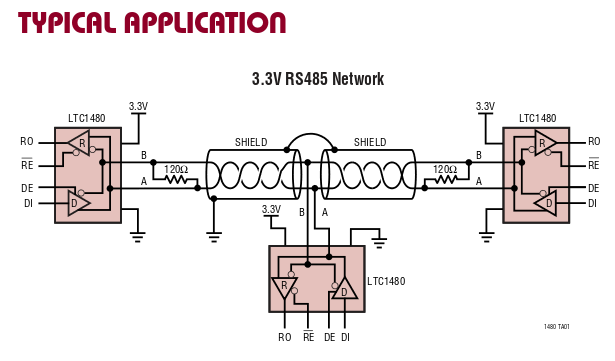 Note that they have a shield grounded at one end (presumably to avoid earth loops). All three devices are grounded but there is no indication that the grounds themselves are connected together.

I thought that the whole idea was that the 2 data wires carried a differential voltage. Thus the reference voltage is each other.

By comparison, MIDI cables use a similar technique. There are two data wires (they are not differential, but carry a current which drives an LED in an optocoupler). You connect the ground (shield) at one end only. Otherwise you set up an earth loop.

Interestingly, that mentions ground (but not a shield):

RS-485 is designed to be a balanced system. Simply put, this means there are two wires, other than ground, that are used to transmit the signal.

Signal ground, don't forget it. While a differential signal does not require a signal ground to communicate, the ground wire serves an important purpose. Over a distance of hundreds or thousands of feet there can be very significant differences in the voltage level of "ground." RS-485 networks can typically maintain correct data with a difference of -7 to +12 Volts. If the grounds differ more than that amount, data will be lost and often the port itself will be damaged. The function of the signal ground wire is to tie the signal ground of each of the nodes to one common ground. However, if the differences in signal grounds is too great, further attention is necessary. Optical isolation is the cure for this problem.

RS485 is a symetrical two wire protocol. the same system as sound cables with the 3 pin XLR.
we often use this over two wire but these wire must be twisted for such a long distance. if your cable has a shield, ground it on both sides, this gives better noise to signal ratio.

anyway , most devices (modems) have a power supply without ground (only 2 pins on the 220v side) so the ground potential difference is not a problem. most 485 devices can run on one pair (half duplex) or two pairs (full duplex) if available use two pairs but if you dont have massive amount of data, one pair is ok.

my installation with rs485 uses only one pair (taking data from a clock to a point aprox. 500 meters away) works perfect.

EIA-485 says that using the ground can be a advantage for longer lines, but its not nessecary.
wikipedia gives a few good explanations about differential or symetrical transmissions and EIA-485

All three devices are grounded but there is no indication that the grounds themselves are connected together.

Yes there is, they all use the same symbol so they are all connected together. This can be either by a wire between the two units or a wire on each unit to the read ground ( Earth ).

Yes, but the ground symbol, over a long distance, suggests to me that they are locally grounded.

In any case, doesn't carrying a ground wire negate the advantage of having a balanced pair? The balanced A/B pair is to cancel out induced voltages on a long cable run, right? So this is negated by supplying ground over a long cable run.

I don't see a problem the wire I use has 2 wires and a shielding which is the ground. Or 4 wires and there twisted pairs. They ground at main panel. I've run miles of this on motels and it works fine.

Yes, but the ground symbol, over a long distance, suggests to me that they are locally grounded.

No it is a symbol that means the same place, not a local one. If it were a local one then there would be two different ground symbols. There are several, notice the one in your circuit is Earth, there is only one Earth. Note if they were local grounds then there would be a number in them like on the right hand side.

The balanced A/B pair is to cancel out induced voltages on a long cable run, right?

Not quite, the twisted pair ensures that any signal picked up is common to both wires. Then the same difference is preserved between the two signals.

So this is negated by supplying ground over a long cable run.

No, if this induced signal is also picked up by the ground wire then the differential is still preserved.

Quoting Michael Karas from that:

For successful design and deployment of RS-485 networks I strongly recommend that you read and comprehend these application note documents:

I think the relevant quote from these is

Although the potential difference between the data-pair conductors determines the signal without officially involving ground, the bus needs a ground wire to provide a return path for induced common-mode noise and currents, such as the receivers' input current. A typical mistake is to connect two nodes with only two wires. If you do this, the system may radiate high levels of EMI, because the common-mode return current finds its way back to the source, regardless of where the loop takes it. An intentional ground provides a low-impedance path in a known location, thus reducing emissions.

OK, let's get cunning about this and just look at the specifications of an actual RS-485 interface.

This means that in order to work properly, you must constrain the voltages to those levels. How do you propose to do this?

Well, either you know that your grounds are at the same voltage due to other connections, or you provide a ground connection for a reference along with the data wires. If there is a concern that this will cause a "ground loop" with significant current flowing then you need to fix that problem.

Please get it straight. RS-485 is a protocol designed to communicate over significant distance with a degree of noise immunity. It does not provide any degree of isolation such as Ethernet. If that is what you want, you need optic fibre.

Thanks guys for the replies.

I take it that ideally I would connect all the grounds (in the diagram in post #5) together, preferably through shield, so there is no difference between grounds that could arise through using local grounds over the 1 km distance.

However then I run the risk of a ground loop which I'm not sure how to remove. (I will do some more googling)

The other alternative is to use optoisolated RS485 transceivers.

Is this a fair precis?

You not have a ground loop if it runs one way.

I'm not sure what you mean by that. Are you saying only connect shield to ground at one end?

As an aside, is Cat5 Ok for long runs of RS485? Too many cores I know but its cheap and comes in UV resistant forms.

However then I run the risk of a ground loop which I'm not sure how to remove.

This is indeed a serious risk. Even in a single household there can be large ground loop currents, or at least significant potential differences between grounds, such as (in the U.S.) between different branches of the 120-0-120 incoming line.