I want to hack my digital alarm clock to display the high temperature for the day instead of time. I think this is something very feasible for a beginner, but I have no idea where to begin prodding in my clock to figure out how to control the display.

I was also planning on having the Arduino connect to the internet wirelessly. I am inclined to buy a component that connects to my wifi, but as far as I can tell those are quite expensive. My other option is going through my laptop somehow, but that seems silly.

Any other advise would be appreciated.

You can always connect through Ethernet...

About where to start hacking your clock... tear it apart and see if you can figure out where the led drivers are and cut the "chord" between them and the processor inside the clock.

From there, I assume that they are like normal LEDs? Do I just fiddle around with it from there to find the voltage drop across each LED and the required current, or is there a very specific way?

I have no conveniently placed ethernet ports in my house for this.

Usually the displays are multiplexed.
All the segments are tied together, and they just strobe each digit.
The eyes persistance makes it look like they are all on.

Some displays are common anode, some are common cathode.
Assumming you are still keen, you should try to establish what the supply voltage is, and work from there.

I haven't opened it yet (will begin tomorrow morning), but I think mine is multiplexed. When I use my electric toothbrush, all the number parts seem to jiggle while the rest of the room seems still.

One more question for the night: Whats a safe way to establish the voltage of the power source if it is not marked? I do not see an AC to DC converter on the outside, so I assume one is inside.

Use a voltometer to find the voltage just put the prongs to what you wanna measure and it'll tell you how many volts it has.

A few pictures of the inside of the clock will help. Also where did you get the clock? What brand and model? Maybe someone did this before but a word "clock" is too generic.

I will post some pictures and the model number when I get started in a little while.

I took my clock apart, and I began experimenting with my multimeter. Here are some pictures I took of the inside. I apologize for the poor quality, they were taken with a cell phone.

I have noticed that there are far fewer pins (18, with two unused ones) leading from the controlling board to the display than there are LEDs in the displace (29). Why might this be?

Looks like a typical clock you plug into a wall outlet. To answer your pins question, I suspect the display either has a chip inside to translate 4 digits of binary on the connection into status of a corresponding 7-segment display (more likely) or the display is multiplexed in rows and columns (uess likely). You may be able to tell power and gnd pins and then confirm if a row of four pins control a particular 7-segment display.

Do I just try to establish which pin has the fewest volts on it?

This may not help you, as your module is different, however I have torn apart 4 separate alarm clocks, and so far the pinouts have been the same: 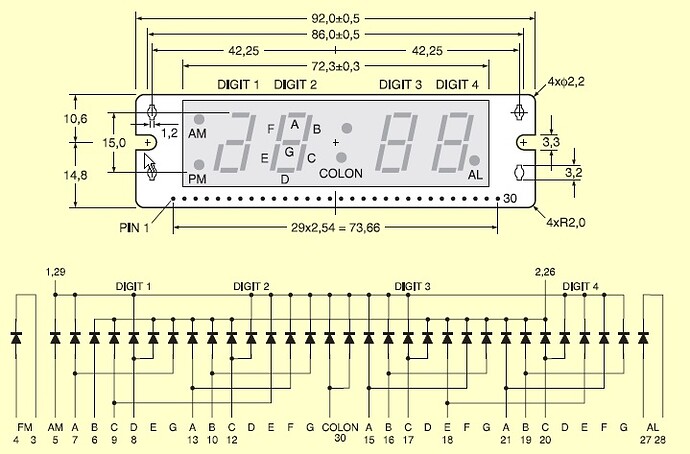 Your schematic seems to have a lot more pins than mine does, and I still find it very odd that there are 20 pins for 29 lights on my display.

EDIT: It might have something to do with this IC controlling it.

EDIT 2: Without knowing exactly how the display works, I have come up with a theory about its operation. I still have not figured out which pin is ground, but earlier I took a guess and then measured the values of the pins. They seemed to be mostly either very small negative numbers compared to that one pin (so they were off I guess), about 0.7V, or about 0.12V. There was one other pin that was very negative compared to the test pin, so that might be ground.

If you're a beginner - I think you're best just buying a serial LCD module for your first project. You are going to pull your hair out for weeks for the say of £10 - £20. Make it hard for yourself now and it's waaaaay more likely that your Arduino will be something that gathers dust in a drawer somewhere.

That is a good option if I cannot re-purpose this alarm clock, but I wanted to try and take something I already have and alter it.

tnecniv:
That is a good option if I cannot re-purpose this alarm clock, but I wanted to try and take something I already have and alter it.

Try take a ground wire and a 5V wire in series with a 300ohm or more resistor, use the ground wire and resistor to touch the connections to see if you can light up any of the leds. Might be fun. Just don't apply 5V and gnd directly to pins.

Use leads 1 and 2 to touch two pins on the display, hopefully you can find what goes on.

I would probably buy some similar displays that I know how to connect to them. Then make this known display work to get yourself some joy and confidence. Just don't be stuck on this unknown display and give up electronics based upon bad experience on the display

I managed to find another unused alarm clock and took that one apart as well. It's display has about the same number of pins as LEDs. My only problem is that I cannot seem to find the ground pin. I have tried putting a wire with about 3 volts on it in a random pin and then touching a wire leading to ground to every other pin a few times now and nothing has lit up.

Is there any other method I can use to discern what pin is ground? If I cannot get this to work, I will just purchase a display online.

I don't know any better way other than poking and reading spec sheet. I think you should just get a new display online. They go for a few USD each.