How to make blinking a shape with U8GLIB ? 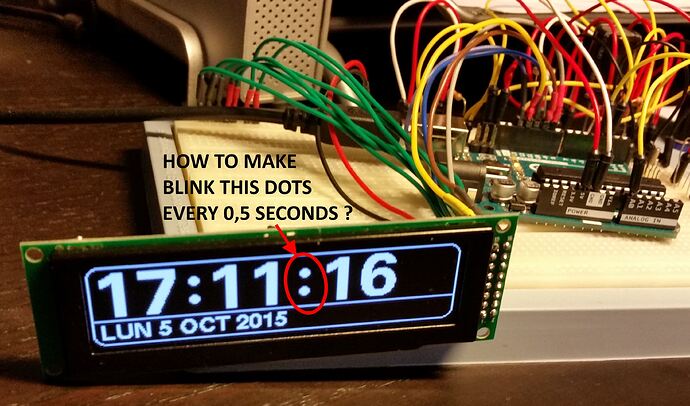 Of course you can optimize this by using a argument for the draw() procedure.

BTW: Nice project and picture. Thanks for sharing.

Thanks for the reply Oliver

Here's the simplified code i made to have a good fluidity :

After several tries i found this way have a clean and regular fluidity for the seconds display increment.
However i tried your solution to use 2 differents draw procedures but without the delays, it works but fluidity is less regular, the dots blinks but just on/off at the second increment...
Maybe i must change the way to launch the picture loop ?

the dots blinks but just on/off at the second increment...

You could change to a half second timer. In fact i think it is better to use a timer which is based on "millis()" instead of your RTC. You sould only sync with the RTC once per day. Otherwise it will may loose precision.

Maybe i must change the way to launch the picture loop ?

Additionally, i suggest that you include a flag to mark, whether you executed the picture loop or not. I think you currently redraw the screen too often: