A few years ago I salvaged the display from a busted HP Deskjet 3059A printer.
Since I had no info on it, driving it wasn't possible.

I had salvaged another HP printer display and it contained the same LCD, but also the MCU driving it (an STM8S103)
The only thing missing was a crystal for the MCU's clock, and the clock pins went to the header for the ribbon cable that connected the display unit to the printer so running it wouldn't be possible.

After tons of google searches, I ended up on a russian or polish forum where somebody else had been playing around with the same type of LCD display and found out what controller it had.
Also found out the display was 3.3V driven.

With that info and the pinout I found out by looking how it was hooked up to the mcu on the other board I soldered some cables on the 3059 display, build myself a 3.3v arduino uno on a breadboard and installed the U8G2 library in the Arduino IDE.

After loading up an example sketch to my "breadboarduino" I hooked up the display and it was working.

Now all I have to do is put together some nice docs on the display from the notes I have been writing down and think of a project to use this display in.
I was thinking since the display has some buttons, I could make a simple portable game or something like that..so to be continued 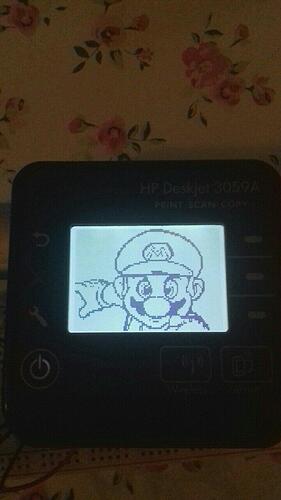 Good work, Cant wait for your next post on this.

well right now I have been playing around with it.
Did some bitmap animation of a running man and currently I'm using it as a serial monitor.
Have the breadboardduino hooked up to my arduino uno which is running tinybasic.

so basically the 2 duino's are a portable basic computer right now, only thing it needs now is an external keyboard and it could run stanalone

I'm glad you're finding a use for these salvaged components. Now there will be two less perfectly functional pieces of electronics going to waste in a dump.

pert:
I'm glad you're finding a use for these salvaged components. Now there will be two less perfectly functional pieces of electronics going to waste in a dump.

yeah I always find it cool to re-use components.
Right now I am struggling with a display form an old humax set-top-box.
can't find any info on it but it's always nice to play around with stuff a little and find it working.

If all fails, I'll try to salvage some other parts (there's an atmega8 on the board with a 16mhz kristal)

Also, in a few days I will be donated some old machinery control panels with some nice grpahics lcd's....let's see what I can salvage in those

I just got one of those machine controllers.
there is a lot of good stuff in there, 128k SRAM chip, 256k EEproms (8bit parallel both) and this display:

Now I wonder if anone else has ever driven something like this before on an arduino (UNO)...

Greetings, can someone give me the LCD pinout.