It's possible to scroll image on the TFT screen with:

Then the top lines goes to bottom and it's scrolling up.

I'm drawing a double height screen (960) and i wish i could scroll this 960px, showing the 480 firsts lines and the next ones when scrolling to 960.

Now place the second sheet on top of the first. Starting at 0 on both sheets.

You can see how to display a scrolling vertical window.
Scrolling one line up means that you copy line#480 onto window location #0. Erase #0 first. Adjust the vertical scroll registers to display line#1 at the top of the window.

It is difficult to describe in text. Much easier with paper, pencil and sellotape.

Scrolling one line of text just involves writing the new bottom line into the correct place in physical TFT memory.

I understand the actual scrolling. 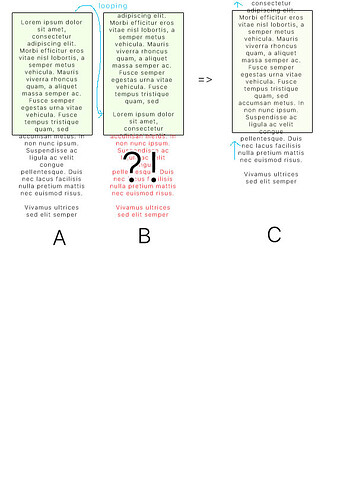 A
is that i draw on the screen, drawing 960px height on 480px screen

B
is the actual scrolling, px under 480px are losts and scrolling is looping the top pixels to the bottom

C
is what i expected, when scrolling the pixels > 480 went to screen 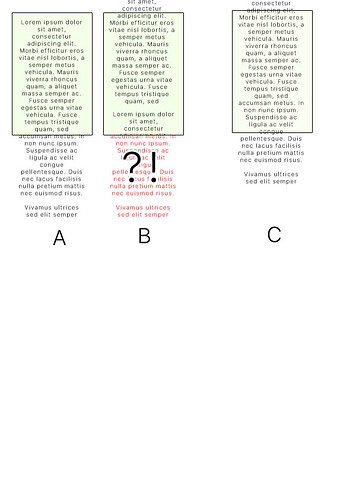 Seriously. Most people have paper and Sellotape.

I presume that you want your TFT to look like a VT100 terminal. smooth scrolling. or a typewriter with newline jerky scrolling.

To perform up and down scrolling you need to update the physical TFT GRAM memory i.e. make new text appear at the bottom of the screen. (or top of screen with scroll down)

Think about 1980s Unix editors and remote Terminals. The editor manipulates small chunks in RAM memory from a large file on hard disk. Great care was required to minimise the comms traffic over a slow phone line.