Arduino in Iron Man suit that my son wore for Halloween.

With a magnetic switch, Arduino then responded to switch by fading In and Out Iron Man's eyes and activating the Repulsor light. Had a prototype of a geared motorbox to activate Repulsor Air Valve but ran out of time to debug, test, and integrate in a 2nd box.

Arduino would then send message to BeagleBoard to activate a Repulsor MP3 sound effect. But some minor config error didn't allow me to see message even though linux module ID'ed FTDI on Arduino.

Much more tech to add to the Iron Man suit below.

Lots of ideas out there, not just this Iron Man suit.

I'm looking forward to the flamethrowers. :

And of course controlled by Arduino, where Arduino can mix it up flame colors with various colored LEDs, as the CO2 air burst moves the fog out at high speed with dazzling flame colors!

Safe and fun to shoot for all ages.

I was kidding at first, but that does sound pretty darn cool!

How about building a couple EMG sensors? Perhaps one of those acoustic ones there is a nice instructable on? You know.. to read muscle tension.. tighten a preset group of muscles to activate a function. Like left biceps, right triceps at the same time activates a servo that pops up a miniature "rocket launcher" prop on the wearers arm?

Or perhaps for us grown-ups, an actual flamethrower, though that would have to have a fairly high threshold for activating. Imagine if you used the Spider-man type "bend wrist back to activate"-type action to start the flamethrower.. you'd most likely start a dozen different fires (including scorching your own face!).

Measure Muscle Sounds! Part 1: Electronic Board: This is a step-by-step guide on how to make your very own prototype acoustic myography sensor. That means a sensor you can use to measure muscle sounds and other physiological vibrations. What is this...

For others, I'm assuming this is the correct URL: http://www.instructables.com/id/Iron_Man_Suit_with_Tech/

EMG sensor...didn't know about such a sensor. Sounds extremely interesting!!!

It takes about 15 min to suit up my son. Wires being routing, diagnostics to ensure things are connected, and adjusting magnetic switch distance from rare-earth magnet is troublesome because my son has no patience after 15 min.

This EMG sensor will allow for instant calibration + accelerator on his hand. Any Arduino HowTos after building EMG sensor(s) to deal with data reliably?

One of the Instructables that you pointed to state that there some consistency problems inherit in manufacturing. >:(

The sensor in the instructable isn't strictly an EMG sensor though, as it uses sound while a true EMG sensor measures electric potensial. The difference, as far as I remember, is that the EMG sensors constantly give you a value representing how tense a muscle is while it's acoustic counterpart only reacts to the minute sounds made when a muscle moves.

I am not sure how an EMG sensor works myself but I think they concist of 3 metal connectors (electrodes) on the skin placed on the muscle you want to monitor. Voltage is applied to the two outer-most electrodes, and the one connected to ground and the center one are connected to a signal amplifier.

If you want to have something to take up your time the coming year, check out this incredibly awesome instructable:
http://www.instructables.com/id/Build_Halo_Armor/

If you build an Iron Man costume using that technique and in addition embed it with some cool Arduino controlled features like moving parts (perhaps a panel hiding a simple low-power laser), retractable visage, lights... Allthough.. You might want to build that for yourself and not your kid 'cause that would be a lot of work for something he'd grow out of in a years time (and besides, you would probably enjoy it way more than him anyways ::))

Wow! Leveraging Halo armor instructable would make a great Iron Man suitl. If I only had lots of time, maybe next year's Halloween costume. 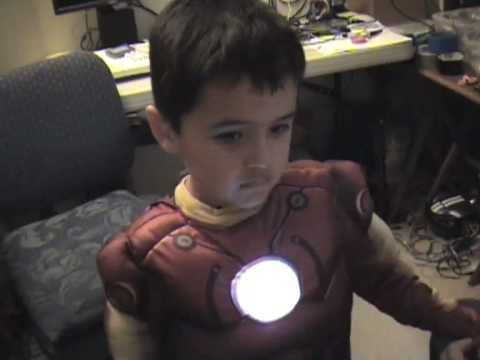 Sorry I'm late to the party... I saw on Instructables that this setup communicated between Arduino & Beagleboard using USB -- is there a particular Arduino library that is best for these sorts of things? I'm also looking to have a BB Angstrom talking to mine... would appreciate any leg-up advice!

I dont think you need any sort of library to make this happen. It would work exactly the same way as when you plug in your arduino to a PC. the beagleboard would be a PC this time.

Thanks, that what 'm guessing -- I was thrown a little but the fact that, at least for my setup, when running Arduino-0015 that the menu

is EMPTY, which made me think that maybe there were some additional packages lurking somewhere that I really ought to know about and just haven't yet installed.

I'm also wondering about power -- in the Iron Man setup there are two separate power supplies for the BB and the Arduino. So right now my tiny setup has two (5v & 9v) wall plugs. Okay for prototyping, but I'll need to sort that one out (and learn something in the process!).