I searched and keep finding the same info regarding Arduino on a Mac (10.5) and having serial port errors. I keep having a fault that the serial port is already in use. I've closed every application except Arduino and disabled all Bluetooth/PDA options. Pretty much followed all the troubleshooting in the user guide.

Is there an application I could be missing? I'm not new to Mac, but I'm no expert either.

Thanks for any and all help.

Please drop to a terminal and run the following command while the Arduino is connected:

It could take up to 15 seconds for a response depending on what all your computer is doing.

What kind of Arduino are you using?

Not sure if i'm having the same issue as Rogue_Hero, but i do not know which serial port to choose from after first launching the Arduino IDE. Arduino is plugged in w/ green light on, yellow light blinking.

Running the command "lsof | grep usbmodem" in a Terminal will list all processes which are using the serial port. If you are getting the error "Serial Port in Use" please run this command and post the results. 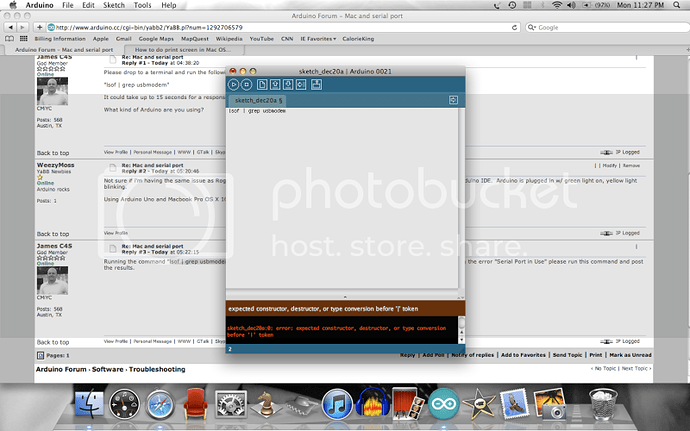 No. Terminal is the OS X application that lets you access the underlying UNIX system.

type the command "lsof | grep usbmodem" (assuming this is a Uno)

Nothing happens, it just shows my name and a blank space.

@WeezyMoss, Inside of the Arduino IDE. When you open the menu Tools -> Serial Port, what do you see?

(FYI, CMD-SHIFT-4 will let you select the portion of the screen if that is easier for you.) 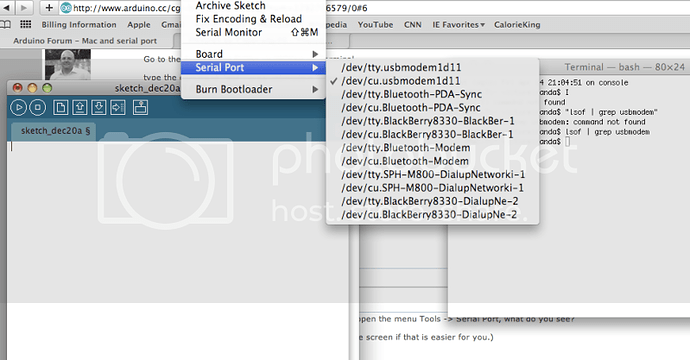 To best honest, I don't believe you when you say that "lsof | grep usbmodem" comes back with nothing.

Have you installed any kind of software for your Blackberry?

Not sure, i don't even have that phone anymore... i type "LSOF | GREP USBMODEM" lower case and without the quotation marks. I first copy and pasted the text when you first posted it.

Wait, I'm sorry, but WeezyMoss, you should be selecting "/dev/tty.usbmodem1d11"

(or pretty much anything that says /dev/tty.usbmodem......) 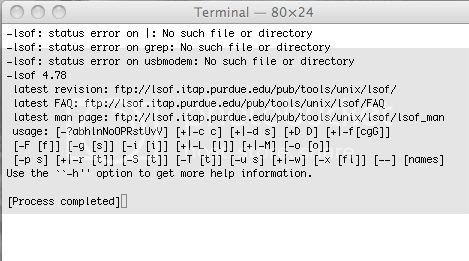 This popped up... i might have been typing the lsof command in the wrong area.

I'll try selecting the tty one, i have been going off the "Getting started with Arduino Book". They said to select dev cu usbserial... Do you think the info in the book is outdated?

No. In the Arduino IDE, you should be select the line that is similar to "tty.usbmodem" which is what I think your original question was (but I kind of missed it.)

A long (long) time ago I remember reading the difference between "tty" and "cu". I just use "tty" because it is easier.

That worked, thanks for all the help.