Is this correct? thanks.

What do you mean with "in a row".
Post a diagram showing how you have connected the LEDs.

A multiplexer basically drives the LEDs with the full set current for for "1/n outputs" time.
If you set current with Rset to 40mA, then each LED on the eight outputs gets 40mA for 1/8 of the time.
So average LED current is 5mA, but peak current is 40mA.
Leo..

The chip multiplexes, they are not all on at the same time.

Referring to this typical drawing, what are you asking? 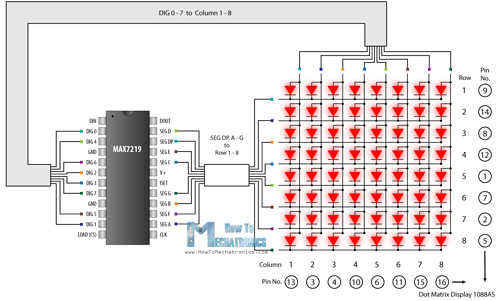 In the diagram you posted, is the MAX7219 multiplexing rows and columns or individual LEDs?

That is, when multiplexed would 1 pin would sink 8 LEDs in Row 1 at the same time or is the MAX7219 actually multiplexing each individual LED in Row 1 one at a time?

Eight LEDs are selected at the time, then the next eight, etc.

If you only want to use 11 LEDs, then it might be easier to use a shift register (no multiplexing).
Or addressable LEDs (no chips at all).

What are you trying to do.
Leo..

I am driving a 10 x 11 LED matrix using shift registers with multiplexing. Was considering going to MAX7219 but the data sheet shows a max sink current of 500mA and max source current of 100mA.

If I have 11 LEDs in a row to be lit up at one time and multiplexed with other rows, the max allowed current per LED is 100mA/11 LEDs = 9mA per LED
(crux of question - is this math right for multiplexing?)

Don't most LEDs have specs showing up to 20mA current? Seems like MAX7219 cannot provide much current.

I don't trust my logic since so many people use MAX7219. With my logic an 8x8 matrix where a full row lights up can be provided 100mA/8 = 12.5 mA per LED. This may be plenty. When going to larger numbers of LEDs per row the current per LED drops.

Is this correct, or does multiplexing change this math?

If this chip has to sink a row, then you have to divide that current by the number of LEDs in that row.
A 10x11 matrix is weird and un-economic for digital chips that usually work in eigthts.

Are you sure your LEDs are ok with those peak currents (see datasheet).
There might also be thermal limitations with a MAX, since LED current limiting is done internally (no CL resistors).
Leo..

That makes sense. Just to be sure I get it, looking at the LED matrix larryd posted above, Is this right? (I know LEDs cannot handle this current, just trying to understand the concept:

So in my case using 11 LEDs (agree not efficient chip wise) MAX7219 can provide:

Too high of course, but opposite and better problem than I started with, not enough current!
Is my math & reasoning right?

Ok, then is this correct, with regard to data sheet max current:

I haven’t been following lately, but in that drawing they are driving 64 LEDs.
You want to drive 11.
What’s the issue?

Not on my calculator.