I already have a IR tachometer sensor that works fine for e.g. fan blades or spokes in a wheel but now I have need of getting the RPM of a pump motor.
The motor is quite big and has a plastic fan in one end with a vent grill and the motor axis with a coupling to the pump in the other, like attached image. 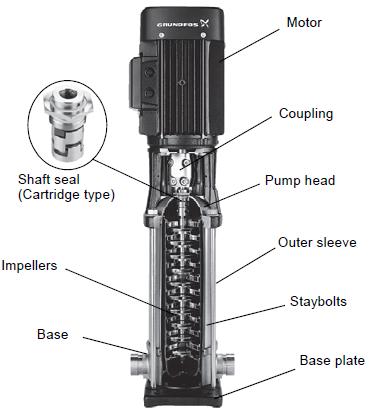 What would be the best way to get the RPM of this one?

The fan on top if most accessible but all black and quite dirty. I tested with the IR tachometer I have but it wasn't able to pick up any RPM's from the fan through the vent screen.

What does the plate on the motor say the RPM is?

If it's an AC induction motor speed will be from 95% to 99.9% of synchronous speed, at 50 Hz for a 2 pole motor thats 2850 to 2997 RPM, half that for a 4 pole. If the load increases enough to drag the speed below 95% it's probably going to stall or trip the overload, so watching the RPM would be pretty boring.

Are you allowed to modify the motor housing?

For a similar pump I replaced the fan housing with a larger DIY version that allowed the shaft to be extended beyond the fan impeller. To this I attached a small magnet and used a hall effect sensor attached to the fan guard to measure the rotation speed.

I have a 50Hz mains supply. From a cold startup the motor runs at 48.2 Hz then slows down to a stable 47.5 Hz as the winding resistance increases with temperature. You can see the motor jump +/- 0.1 Hz in speed several times per day as the mains voltage varies with supply and load.