Hello, thanks for taking time and possibly helping me understand some of the components in this circuit.

I am looking at adapting this circuit for 24V (which really means close to 30V). 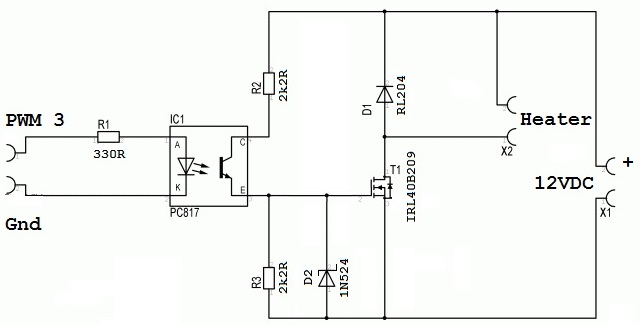 The MOSFET is IR which is robust. (IRL40B209-ND datasheet) It can switch sufficient voltage and amperage for a lot of requirements.

I believe R2 is only there to pull the gate of the MOSFET down so that the MOSFET can be switched off. The higher the ohm, the slower the MOSFET will be turned off and the less power lost when the switch is on. If speed isn't a concern, the higher the better. If the switch is to be PWM capable, then R2 needs to be balanced to the desired switching speed. I have no idea how to calculate this.

I have no idea what R3 is there for. It looks to me that R2 and R3 form a voltage divider which effectively (since they are equal ohms) divides the voltage to be switched by half and applies that as the Maximum voltage to the gate of the MOSFET. The circuit was originally for another MOSFET and that may have been necessary. Since this MOSFET has VDSS of 40V minimum, what's the point? Can R3 simply be left out? The higher the ohm on R3, the slower the MOSFET can be turned on.

D1 is required if switching inductive loads so that back EMF doesn't kill anything. This should be a fairly robust diode with sufficient Amp and Volt to handle the back EMF. The schematic calls for RL204 which appears to be rated at 400V and 2A. Is this sufficient for what can be expected for back EMF? (My specific requirement is non-inductive so I could leave this out but I want a circuit which can be used for future Projects which may be inductive.)

I also have no idea what D2 is there for or what it is doing. What's worse, the schematic calls for a 1N524 which Digikey has listed at various voltages between 10V and 18V. What is the purpose for this Diode? What voltage should it be rated at if switching 12V? What voltage if switching 24V?.

I hope I have provided sufficient info that maybe someone can answer some of the questions I still have.

Thanks for whatever assistance you may be able to provide. 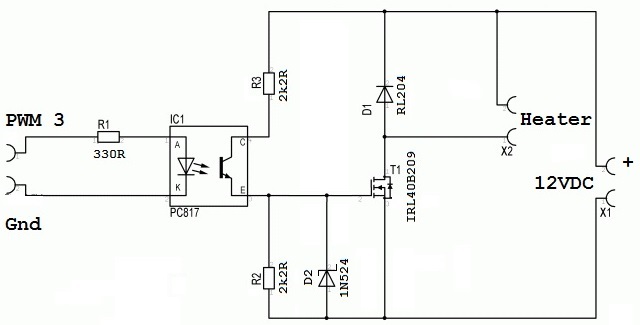 R2 acts more like a current limiting resistor for the opto coupler and gate. R3 is the gate resistor. Both are required.

Remember, with no input on the opto isolator, the output is non-conducting. That ties the gate of the mosfet to ground through R3. While off, R2 does nothing, and the mosfet is also OFF, which means the heater is OFF.

Forgot about D2, which is another part of the reason for R2. D2 is a zener diode, which sets the limit of the voltage the gate sees by conducting any voltage above it's zener rating to ground. Without R2, when the opto is conducting, the zener would be trying to regulate the power supply to ground and either drag the PSU voltage down (for a weak supply), or simply burn the zener out (probably what would happen in your scenario). It also helps prevent transients that could damage the gate.

Some other considerations are:

Lets start through your circuit. Assuming the PWM3 is 0 to 4.5 V (outputs never get to 5 V, especially when loaded.)

Lets assume D2 = 12 V (would make sense to protect the gate from over voltage).

OFF: Gate should be at or near 0. The "dark" current of the IC1 if negligible so there is no issue turning off.

Now, the above analysis is for "static" operation and some low frequency PWM operation. If you plan on PWM'ing the heater at any significant frequency this circuit will not be capable of switching the FET on fast enough.

Tinman, thanks for explaining thus far. If I am correct that R2/R3 creates a voltage divider which reduces the gate potential on the MOSFET to approximately half what the switched voltage is, then I have to make sure that the Zener is rated for at least that voltage. So, assuming 30 Volts max, I need at least a 15V D2, right? If it is only there to protect the MOSFET gate against overvoltage and transients then there is no reason to go with the 18V version since the MOSFET can tolerate up to +-20V (VGS). Have I understood that correct?

JohnRob, thanks for the explanations. That really helps.

As I previously asked TinMan, is there any reason not to use the 18V version of the Zener?

You said "at any significant frequency this circuit will not be capable of switching the FET on fast enough". Is that because of the values of R2 and D2 only or are there other problems as well?

The zener protects the gate from excessive voltage. The MosFet Gate to Source max is 20V, So an 18V zener will be fine. One might argue that 18V is kind of close to the 20V max (i.e. not enough safety margin, but I know the 20V is conservative).

When you switch a MosFet quickly, you will need more current to change the gate quickly from 0 to >6 to 8 V. This is because there is an electrical charge in the MosFet (kind of like a capacitor) that must be charged to turn on and discharged to turn off **. What PWM frequency do you want to accommodate?

** I took some liberties to make the concept simple.

JaBa:
Tinman, thanks for explaining thus far. If I am correct that R2/R3 creates a voltage divider which reduces the gate potential on the MOSFET to approximately half what the switched voltage is, then I have to make sure that the Zener is rated for at least that voltage. So, assuming 30 Volts max, I need at least a 15V D2, right?

No, that's not quite it.

R2 limits the voltage across the opto isolator so it doesn't burn up, but must be small enough to permit the
gate to rise to 12V for any valid supply voltage - its value depends on the rest of the circuit.

R3 turns off the MOSFET and needs to be low enough in value to do that fast enough (MOSFET
gates are very capacitive). However the opto-isolator current is going to be a limiting factor - it
must be able to pull the gate voltage upto 12V despite R3, so R3 can't be too low either.

D2 sets the on voltage for the gate which should be close to 12V. Use a 12V zener.

This circuit is not suitable for PWM at high rates (like 10's of kHz), its not able to switch the MOSFET
particularly fast.

By the way you'll often see equal component values used when the values aren't super critical, as
manufacturing costs go up with the number of different components used on a board. The fact
R2 = R3 is not indicative that 2k2 is the ideal value for either.

And because this is designed for a heater its probably never intended for PWM. The free-wheel
diode is probably a "just in case" component, heaters are not usually particularly inductive, but
the designer of the circuit guarded against the user of the circuit sticking in a relay between this
board and the actual heater.

The zener protects the gate from excessive voltage. The MosFet Gate to Source max is 20V, So an 18V zener will be fine.

No, that's far from being an adequate margin of safety. Use a 12V zener. It is so super-easy to pop a
MOSFET if you fail to take these precautions. Over-voltage on the gate is immediate death within
nanoseconds to the gate-oxide layer. Its not unknown for upto 5V to appear across the lead inductance
of a MOSFET source when it switches, and that will add to the Vgs that the oxide sees.

If the layout of the gate-drive circuit isn't super-tight, you should place the zener directly across the
MOSFET gate and source pins.

JaBa:
I believe R2 is only there to pull the gate of the MOSFET down so that the MOSFET can be switched off.

I believe R2 is only there to pull the gate of the MOSFET down so that the MOSFET can be switched off.

I think you mean R3.
R2 is to pull the gate potential up ,higher, than the source potential.